Dan Peterson
Many people exercise to improve the health of their hearts. Now, researchers have found a link between your heart rate just before and during exercise and your chances of a future heart attack.

Just the thought of exercise raises your heart rate. The new study shows that how much it goes up is related to the odds of you eventually dying of a heart attack.

More than 300,000 people die each year from sudden cardiac arrest in the U.S., often with no known risk factors. Being able to find early warning signs has been the goal of researchers like Professor Xavier Jouven, of the Hopital Européen Georges Pompidou in Paris. 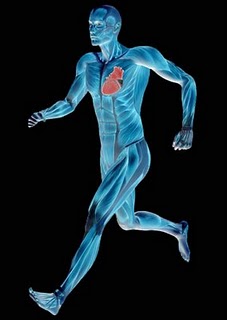 Jouven's team has been examining data from a study of 7,746 French men employed by the Paris Civil Service and given health examinations between 1967-1972, including exercise tests, electrocardiograms and heart rate measurements. Over an average 23-year follow-up, 83 eventually died of heart attacks, also known as sudden cardiac death (SCD).

In 2005, Jouven's team first showed that how a heart behaves before, during and after exercise could predict future problems. The risk of a future heart attack was about four times higher than normal in men whose resting hearts beat faster than 75 beats per minute (bpm) or did not speed up by more than 89 beats during exercise. Likewise, heart attacks were twice as likely in men whose heart rates didn't slow down more than 25 beats in the first minute after exercise stopped.

In a recent study, published in the European Heart Journal, the French researchers found another interesting clue in the same data set. Not only was the resting heart rate of each person taken, but also another reading right before they were to start a strenuous exercise bike test. This rate is affected by what they called "mild mental stress." It measures the body's physiological anticipation of exercise.

Think of this type of stress as the brain's warning to the body that some difficult, sweaty work is about to begin. It is normal for this rate to be slightly higher than the resting rate, but for some it is significantly higher.

So, the high-risk heart overreacts to the anticipation of exercise, and then does not respond to the full extent needed during exercise. Afterwards, it does not regulate itself down fast enough.

Jouven hypothesized that the autonomic nervous system (ANS), the body's internal control governor, must be out of whack.

"There is a balance between the accelerator (sympathetic activation) and the brake (vagus nerve activation)," Jouven explains. "During an ischemic episode, when blood flow to the heart is reduced, sympathetic activation occurs to counteract it. However, if there is no protection by the vagal tone (the brake), the activation can become uncontrolled and then it becomes dangerous."

Finding this connection between heart rate and future heart problems is encouraging for future research, according to Jouven.

"These findings may carry significant clinical implications," he said. "Few measurements in medicine are as inexpensive and as easy to obtain in large general populations as to measure the heart rate difference between resting and being ready to perform an exercise test. The results will contribute towards a better understanding of the mechanisms of cardiac death."