Dan Peterson
Most baseball general managers live in obscurity most of their careers.  Its their first hire, the manager, that usually gets the red hot spotlight, after every win and loss, second-guessed by reporters with recorders and then later by fans.  The GM puts the players on the field and lets the manager and his coaches take it from there.

Billy Beane , the Oakland A's general manager, could have also been an unknown, albeit interesting, name to the baseball audience if it were not for author Michael Lewis' 2003 book, Moneyball .  The biography was a runaway hit (even today, eight years later, it is #2 on Amazon's list of baseball books).  It has morphed into a full-fledged catchphrase philosophy used by everyone from Wall Street (where Beane borrowed the concept) to business consulting.

Next month, in the ultimate, ego-boosting moment, Beane will see himself on the silver screen portrayed by none other than Brad Pitt in Moneyball - the movie. 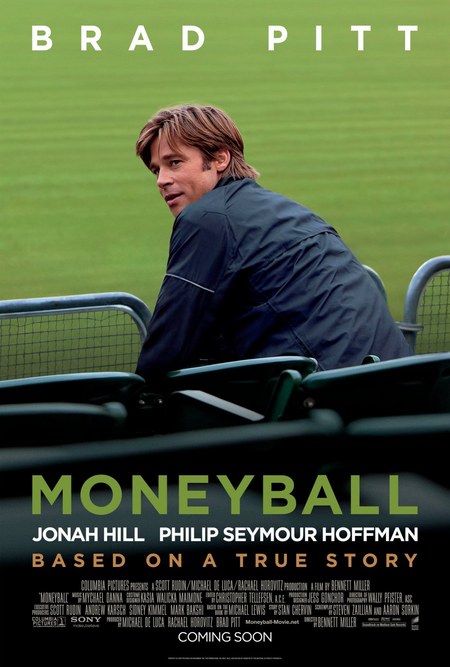 The general theory behind his analysis is to find undervalued assets (ballplayers) by focusing on statistics that your competition is ignoring.  Of course, you have to believe in your metrics and their predictive value for success (why has everyone else ignored these stats?)

The source of most of Beane's buried treasure of stats is uber-stat guru Bill James and his Sabrmetrics.  Like picking undervalued stocks of soon to explode companies, Beane looked for the diamond in the dust (pun intended) and sign the player while no one was looking.  Constrained by his "small-market" team revenues, or maybe by his owners' crowbar-proof wallets, he needed to make the most from every dollar.

The combination of a GM's shrewd player selection and a manager who can develop that talent should reward the owner with the best of both worlds: an inexpensive team that wins.  This salary vs. performance metric is captured perfectly in this graphic at BenFry.com .  It connects the 2010 win-loss record for each MLB team with its payroll to show the "bang for the buck" that the GMs/managers are getting from their players.

While the critics of Moneyball tactics would rightly point to the A's recent lack of a World Series win and that their first .500 season since 2006 came last year, the "wins to wages" ratio has not only kept Beane in a job but given him part ownership in the A's and now the newly resurrected San Jose Earthquakes of soccer's MLS.  Beane believes the same search for meaningful and undiscovered metrics in soccer can give the Quakes the same arbitrage advantage.  In fact, there are reports that he will focus full-time on conquering soccer as he knows there are much bigger opportunities worldwide if he can prove his methods within MLS.

In baseball, Beane relied on James for creative and more relevant statistical slices of the game.  In soccer, he is working with some top clubs including his new favorite, Tottenham-Hotspur, of the English Premier League.  While he respects the history and tradition of the game, he is confident that his search for a competitive advantage will uncover hidden talents.

Analytical tools from companies such as Opta in Europe and Match Analysis in the U.S. have combined video with detailed stat breakdowns of every touch of the ball for every player in each game.  Finding the right pattern and determinant of success has become the key, according to Match Analysis president Mark Brunkhart as quoted by the Guardian, "You don't need statistics to spot the real great players or the really bad ones. The trick is to take the players between those two extremes and identify which are the best ones.  If all you do is buy the players that everyone else wants to buy then you will end up paying top dollar. But if you take Beane's approach - to use a disciplined statistical process to influence the selection of players who will bring the most value - then you are giving yourself the best chance of success. Who would not want to do that?"

Not to feel left out (or safe from scrutiny), the NBA now has its own sport-specific zealots.  The Association for Professional Basketball Research (APBR) devotes its members time and research to finding the same type of meaningful stats that have been ignored by players, coaches and fans.  They, too, have their own Moneyball-bible, "The Wages of Wins " by David Berri, Martin Schmidt, and Stacey Brook.  David Berri's WoW journal/blog regularly posts updates and stories related to the current NBA season and some very intriguing analysis of its players and the value of their contributions.

None other than Malcolm Gladwell, of Tipping Point, Blink and Outliers fame, provided the review of Wages of Wins for the New Yorker.  One of the main stats used is something called a player's "Win Score" which attempts to measure the complete player, not just points, rebounds and assists.

WS is then adjusted for minutes played with the stat, WS48.  Of course, different player positions will have different responsibilities, so to compare players of different positions the Position Adjusted Win Score per 48 minutes or PAWS48 is calculated as: WS48 – Average WS48 at primary position played.  This allows an apples to apples comparison between players at a position, and a reasonable comparison of players' values across positions.

Will these statistics-based approaches to player evaluation be accepted by the "establishment"?  Judging by the growing number of young, MBA-educated GMs in sports, there is a movement towards more efficient and objective selection criteria.  It appears the evidence-based general manager is here to stay.