Danna Staaf
My thesis is now officially half published*! Can we have a party or something?

Marine Ecology Progress Series has just put out my paper, "Effects of temperature on the embryonic development of the Humboldt squid Dosidicus gigas." Or, as I said in the title--Baby Squid Like it Warm. 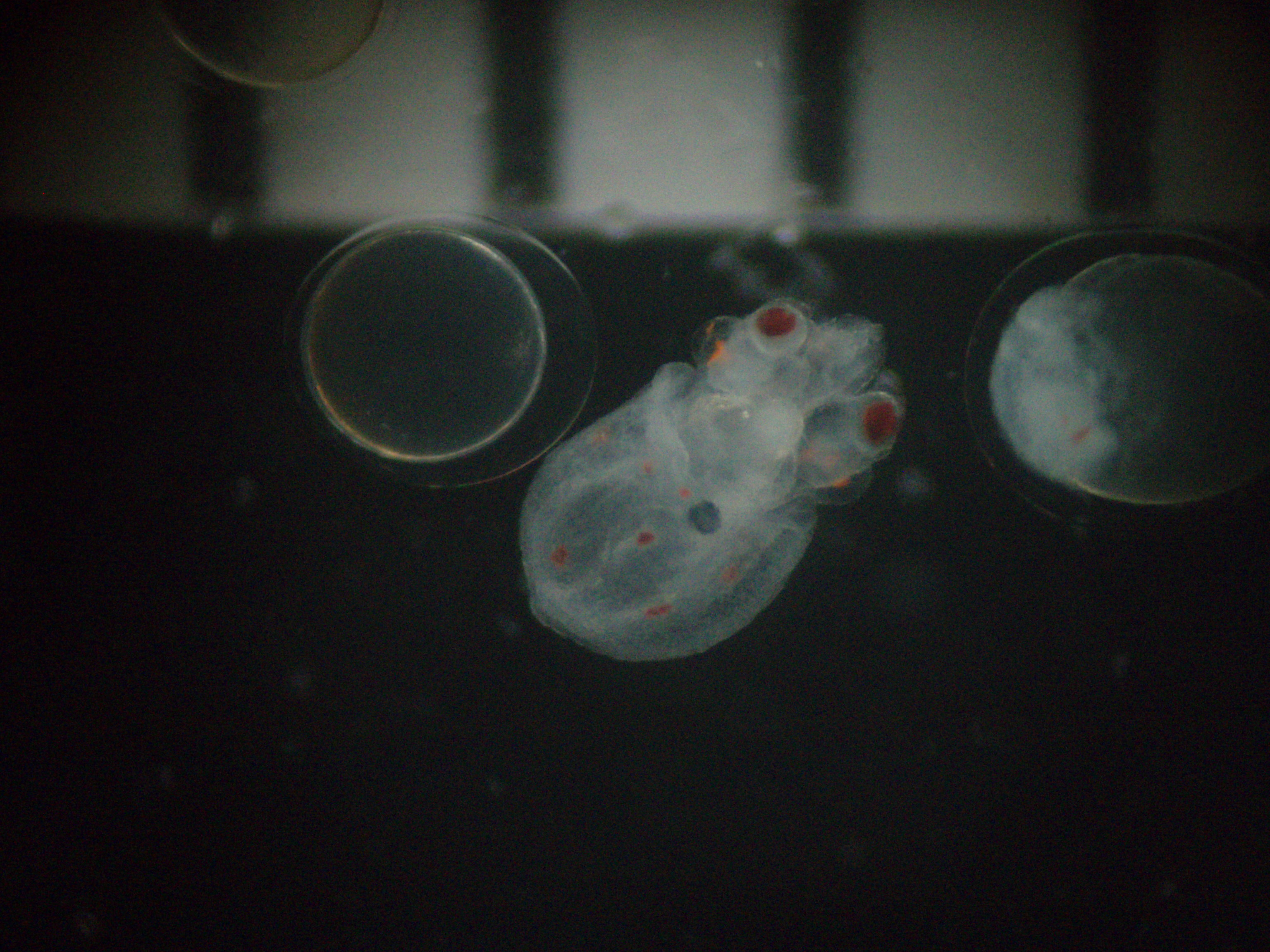 Just-hatched baby squid next to unfertilized egg.
Ruler increments are millimeters.
That's very small.
Humboldt squid have been invading California, and lands further north, for a decade or two. But the on-again, off-again nature of the invasion, plus the manifest absence of any squid babies in California, has led folks to wonder whether the Humboldts are truly establishing a northern population or if adults are just migrating up here for a meal.
Plenty of different studies could address this question, but we decided to start by asking: Is it even possible? All the Humboldt eggs and babies we've ever seen have been in pretty warm water, in the tropics and subtropics. So if a Humboldt squid spawned in temperate water up north, would the babies survive?
So I made many squid babies, incubated them at many temperatures, and learned many curious things. First, 30°C (86°F) is actually too hot for squid babies to survive in the lab! The high 20's, in the Gulf of California where we found the first Humboldt egg mass, is right at the upper limit of what they can tolerate, yet they seem to do really well there.
Heat is awesome--until it's not.
These eggs are all dead.

More relevant to the invasion question is what happens at the other end of the scale. Here the effect on eggs is more gradual: as temperatures get colder, eggs take longer to develop, until finally they don't develop at all. It was actually pretty exciting to keep checking on the coldest eggs, for weeks after the warm babies had all hatched, just to see if anything would happen. I was blown away when one of the 10°C eggs actually developed eyes and an ink sac. But it never hatched.
We concluded that 15°C is the lower limit for hatching in Humboldt squid. And if you've ever been swimming in Northern California, you know that the sea is often even colder than that. But what if there were some places, at some seasons, that were warmer than 15°C?
This brought us to a whole different kind of research. We had to find a huge database of temperatures throughout the northern Pacific, and search through it for water above 15°C. Fortunately, such a database exists, and even more fortunately, our lab tech at the time, Ashley Booth, is a whiz with data processing. Between her and co-author Gilly and new lab tech Patrick Daniel, we managed to make some pretty splendid maps:

Beautiful! But what do they mean?

The wiggly lines drawn across the ocean with numbers underneath are isotherms. They outline areas of the same temperature. Look at the dark line in each map labeled "15"--everything south of that line is warmer than 15°C, and everything north of it is colder.
Map A on the left represents winter temperatures, and Map B in the middle represents summer. In the winter, water warm enough for baby squid is only found off the coast of Mexico. In the summer, however, the warm water moves north, and there's a large baby-friendly area off the California coast. So the Humboldt squid could set up a breeding population out there.
But this area is quite far from the coast, about 500 km, and few scientific cruises sample there. Wouldn't it be great to take a boat out there and look for baby squid? Maybe next year I'll set up a #SciFund project to answer this question once and for all!

* Or it might be three-fifths published. My thesis consisted of four chapters and an appendix; the appendix was published before I graduated and one of the chapters shortly thereafter. So this is the second of four chapters OR the third of five (anticipated) papers. Just to be pedantic.


Squid A Day
More Articles All Articles
About