Danna Staaf
It's one of the most persistent problems in camouflage: how do you hide your eyes?

Skin is not that difficult to disguise. You can change its color, cover it up, match it to your environment. But eyes are tricky. You have to be able to see out of them. And unfortunately, predators are extremely good at looking for eyeballs.

I'm not a predator, but I am a marine biologist, which is kind of the same thing. I've done my time searching through plankton soup for squid larvae--and I can tell you the best way to search is to look for the eyes. They're just so recognizable!

The squid I was hunting were already dead, so, from their point of view, it didn't matter whether I found them or not. They'd already been rudely removed from the gene pool.

But what about squid who are still very much alive and swimming? How to keep a predator from zeroing in on this nice distinctive eyeball?

Thus spake Holt et al., introducing an extremely cool study on how squid have turned their eyes into mirrors.

But not image-reflecting mirrors, like the one in your bathroom. We're talking about a more diffuse reflectance, a kind of mirror that simply reflects ambient light--so it looks like it isn't there. Specifically, we're talking about dielectric mirrors.

Dielectric mirrors are like very thin lasagnas. Two different materials (let's call them pasta and sauce) alternate in multiple layers, and every interface between them--everywhere the pasta touches the sauce--reflects some light. If you have a lot of interfaces--a lot of layers in your lasagna--you can get very high reflectance.

Within the category of dielectric mirrors, according to the Encyclopedia of Laser Physics and Technology,

The simplest and most common design is that of a Bragg mirror, where all optical layer thickness values are just one-quarter of the design wavelength.

Of course, they're talking about human-engineered mirrors, not naturally evolved ones. The "design wavelength" is the wavelength (color) of light that you most want to reflect. If you want to reflect yellow (600 nanometers in wavelength) then you make a Bragg mirror with layers that are one-quarter of 600, or 150, nanometers thick. Easy.

But that's not what squid want. They don't have a "design wavelength." They want to reflect all of the ambient light they possibly can--in other words, broadband reflectance. So what then?

Dielectric mirrors can provide broadband reflectance, but only if they include a variety of layer thicknesses. Basically, you have to make an irregular lasanga: in some layers you add more sauce, in others less. In some layers you use thicker pasta, in others thinner.

That's exactly what squid have done for their eyeballs. They've made a mirror out of layers of cytoplasm (that's the sauce) and densely packed spindle-shaped cells (those are the pasta, but think orzo instead of traditional lasagna noodles). The spindle shape of the cells provides high reflectance, and their packing into layers of variable thickness makes it broadband. 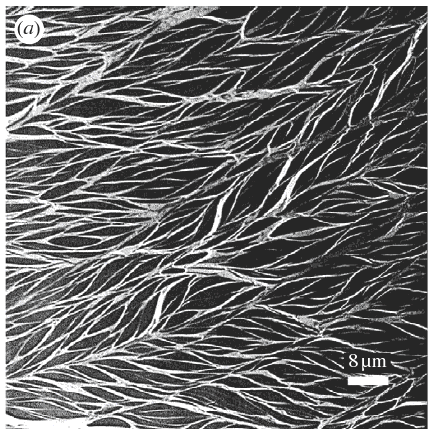 These are the slightly-less-appetizing spindle-shaped cells.

My understanding from the Encyclopedia of Laser Physics is that such a variable-thickness dielectic mirror is actually not a Bragg mirror, which requires layers of one-quarter thickness. But Holt et al. seem pretty sure that their squid mirror is a Bragg mirror, and I don't feel qualified to disagree. Anyway, I'm going to call it a lasagna mirror because that's more fun.

In addition to doing a bunch of crazy cool microscopy to figure out the exact structure of the lasagna mirror, Holt et al. did experiments measuring reflectance. They decided that yes, it works fabulously well! That silvery coating on the squid eye is basically invisible-- 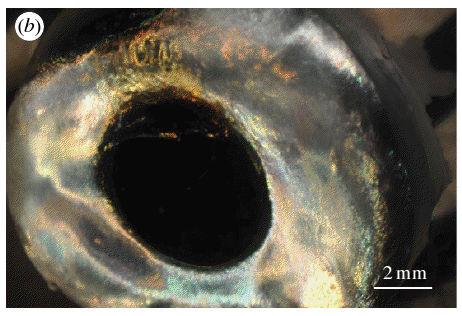 --IF a predator looks at it from the side.

This raises a curious behavioral question: do squid deliberately move up and down in the water to keep potential predators on a horizontal plane with them? That would be rad!

Thanks to Mike Lisieski of Cephalove for bringing this article to my attention with his great post, and to Alison Sweeney, the correponding author of the paper, for sending me a copy.