Danna Staaf
Check out this photo, taken a few weeks ago in La Jolla, Southern California. What do you think is most striking about it? Some people might be surprised by the sheer number of squid in the photo--but rest assured, that's quite normal. This is the California market squid, a gregarious creature that often travels in large shoals. (Or should I say schools? They certainly seem to be swimming in a coordinated manner.)

Other folks might find the squids' vivid colors astonishing--especially if they've ever purchased a box of market squid for bait or dinner: 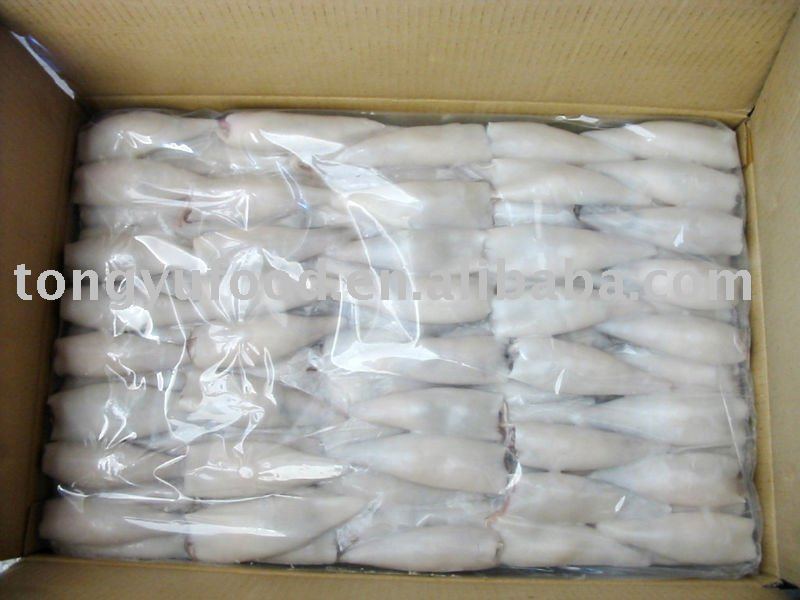 But remember, live squid are masters of color change. Their skin is dense with tiny dots of pigment that can be turned on and off with just a thought, and the bright red these animals are displaying is well within their repertoire. What about the blue eyes? Well, that's simple reflection! After all, squid have mirror eyeballs.

So the colors themselves are not really so surprising. And yet they did surprise me, because most of the underwater images I've seen of California market squid look like this:

Better than the bait-box, but still, not too colorful.

The difference is sunlight. Most photographs I've seen of California market squid have been taken either at night, or during the day at depths where little sunlight penetrates, like the MBARI photo above.

California market squid (and, indeed, most species of squid) tend to stay in deep water during the day, and swim up to the surface at night. This diel vertical migration is a common behavior of marine animals. In the case of squid, they probably do it for two reasons: first, because their food is doing it. They're just following the shrimp and fish and smaller squid that they like to eat.

Second, and critical to our story today, they do it to avoid being eaten. Most squid-eaters are visual predators, which means they need to see a squid to catch a squid. If the squid keep themselves in the dark--by staying deep during the day and only surfacing at night--they're less likely to be seen.

So, the obvious question: what in the world was a big school of squid doing at the surface in broad daylight? Happily, the answer was also obvious, as the photographer tells the story on his website:

[The school of squid] was hanging right next to [Josh's] kayak. When I finally got in [the water], I realized why: big fish were below the shoal, forcing them to flee to the surface, and at the same time, mackerel were attacking from the side, and birds were dive bombing them from above! These squid were under siege and were using any protection they could get, and Josh’s kayak was the best they could find.

He doesn't identify the species of "large fish", but these these were probably the ones to find the squid in deep water and drive the whole school to the surface, where it's easier to pick off individuals. This is exactly the same tactic that forms bait balls, though I'd be reluctant to call this particular aggregation of squid a true bait ball, as it doesn't look particularly spherical in any of the photos.

In any case, this kind of hunting is a neat example of co-evolution in the sea. Small species of fish and squid evolved schooling as a means of confusing predators--when they're all swimming together in a coordinated group, it's much more difficult for a big fish to get a visual lock on just one animal. So then predators evolved cooperative hunting strategies, in which a group of hunters (sometimes even belonging to different species) aggregate around a school, herding it up to the surface where the animals can be more easily trapped and broken apart.

In this case, the squid got an unexpected break when a couple of kayaks showed up for them to hide under, although the photographer doesn't report whether this strategy was particularly effective for them. Disclaimer, disclosure, braggadocio: The San Diego Union-Tribune's report of the squid photos had been sitting in my squid news queue waiting for me to do something about it for a few days when I got an e-mail from the photographer's publicity person, suggesting the story "might be a great fit to be featured on your blog." I happened to agree--hence today's post.

I would just like to point out that her e-mail totally means I'm famous, but I won't let it go to my head.