Doug Sweetser
The spin 2 story unfolds much like that for spin 1. The stories are so similar, I want to take a step back and take a big picture view.

<Higgs digression>
QED works so darn well because Maxwell's theory works so well. In Maxwell's EM, action happens at a distance. Working instantaneously is a great approximation. It is only when people make refined measurements that something goes amiss. It is QED that provides the corrections. This can be done because the coupling constant for EM is small. A Feynman diagram is a visual way of keeping track of the corrections that need to be made to classical theory. Later on today, much will be said about the following three Feynman diagrams: 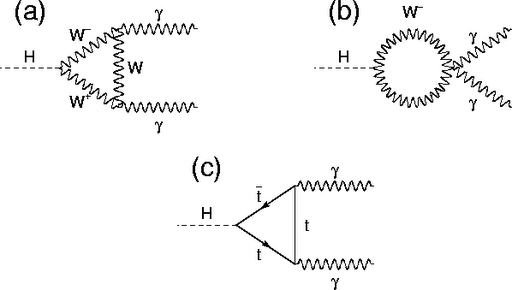 The Higgs boson enters from stage left. A game of triangle toss is played with W's or top quarks. Two photons exit on stage right. Half of the Higgs mass should be in one photon, half in the other. I have never studied a diagram with an internal loop structure like these have.

The W weighs in at 80.4 GeV, while the top lumbers in at 172 GeV. Rumors say the Higgs is just about halfway between these two. The teams at Altas and CMS know how to go through their 200k DVDs worth of data a second to pull out the one CD worth of possible candidates. Because the W and top weigh as much as they do, a pair of photons like this will not happen too often.

As I have said before, if the Higgs is found, I will stop blogging. Why? The Higgs is a means of directly providing mass to the W and Z particles involved in the weak force. It might be a way to provide mass to all flavors of fermions. The false vacuum trick has always struck my ear as false. I want a clear means for providing mass to the big, diverse collection of fermions. It may also be the contempt a professor at Harvard showed for the entire structure known as the standard model that has not given me a positive view on the endeavour.

Right now, I don't have any counter proposal on the table. I do recall a cute cancellation, one involving terms that play with gravity x'ing out those for the other forces. My hope rests on the dream that when gravity is integrated correctly with the other forces of Nature, the need for the Higgs disappears.

Out of the finite multitude of possible sources, a pair of oh-so-energetic photons are going to suggest a Higgs was there. That really is an incredible accomplishment, one whose technical details I will never be able to understand. I have no idea how to create so much data, comb through all the possibilities, then say, yup, these are the ones that could be the remnants of the scalar Higgs boson going through a W or top triangle thingie.

Picture of the big picture.

In a comment, I added some detail to Feynman's Feynman diagram: 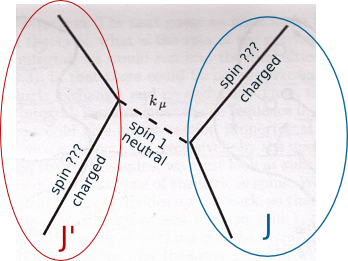 [corrected to not include the virtual particle.] This helped my visual brain understand what is going on in the calculation. The two interacting particles can have any spin. The dashed line is a virtual particle, the focus of QED. The calculation Feynman did and I tried to provide detail for was about the spin of the exchanged particle.

One CuriousReader hoped I could provide more technical detail or rigour for how that step is achieved in the context of an action. I was not able to do so. The way I work, I do accept statements made by authorities. If I had a Ph.D. in quantum field theory, I would be able to fill in the blanks and provide all the caveats required to reach the conclusion Feynman does. That will not happen, so a sketch at this level of detail is all I can provide. This is part of being ultra-conservative: accept the statements of the grandmasters. The only way I can possibly do something new is to look where others have not.

When I do math, I like to let physics be my guide. When doing physics, I like math to lead the way. It is so hard to get a toehold on either subject that I find the contrasting viewpoint is helpful. This analysis is about the spin of a field that mediates an interaction. Tricky stuff. What I focused on was a mini-math summary Feynman provided about spin 2 and its projection [state]. He pointed out that the rank 2 tensors he had been working with were just like the following calculation done with complex numbers:

These are "evidently of spin 2 and project +/-2" (page 39). I can see why this is a projection [state] (we end up with no imaginary), and the reason it is spin 2 is the 2 in the imaginary part that cancels. No doubt those more versed in these subjects will be upset, there is so much more too it than just that. Sure there is, but such it the continual battle between realists and minimalists. 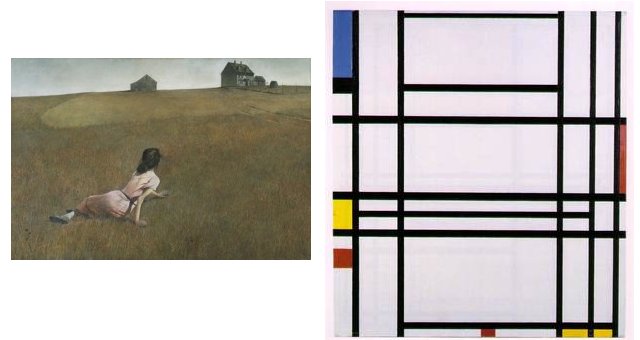 There are those who would say the painting on the [left] by Andrew Wyeth is the only real, serious painting. In a way, that was Julian Schwinger's critique of Feynman diagrams, little pictures that hid the deep math on the algebra of local fields. It is kind of ironic that one reason I abandon a long term relationship with a Lagrangian was because I could not spot a local gauge symmetry, even though I don't understand local gauge symmetry at a deep level. Respect the masters, it is the way of the ultra-conservative fringe.

A sketch of the calculation

He starts out his march to a spin 2 field for the interacting field with this equation:

[clarification: everything in this analysis happens in the momentum representation instead of the more common position representation, so I have indicated that with the tilde above the tensors.]
We could spend an entire blog about what has already been assumed here, including the sign which will lead directly to like charges attracting for gravity. This is a linear perturbation theory approach to gravity as indicated by the tensor h. The EM source J is quite a well defined animal, so well defined you can buy a meter to measure it. My sense is that the stress energy tensor Tuv is much trickier to pin down.

Both these tensors are symmetric - changing the order of the indices leaves the signs unchanged.

We don't have a workable quantum gravity theory, but he guesses what it could be based on the answer from EM:

The trace of a symmetric tensor is a Lorentz invariant quantity. There is no obvious reason why it has to be zero. A graviton travelling the speed of light needs two modes of polarization, not three. Care must be taken to eliminate the spin 0 mode. I have also read that a spin 0 field would not be able to bend light, and thus would be inconsistent with experimental results.

There are more terms when written out in components (ten in all). Because the tensors are symmetric, the off-diagonal terms get factors of two.

A heads up: the same magic trick will be used as for EM. Instead of picking a basis for the wave number k's that is uniform, the kx and ky are chose so they are zero. That will allow one to collect terms that are "instantaneous" versus those that are corrections. Keep anything with a t or a z separate from the transverse terms when writing this out in the component form:

One uses the energy conservation law that is simpler to write out in the momentum representation space:

The problem with the transverse xy term is that it has a place for 3 polarizations when the requirement is for only 2.

He adds in a factor so that the transverse part depends on only two terms. The goal is to eliminate the stuff from the diagonal so he adds a term that is only diagonal:

I guess we could say this "completes the square", a phrase I dimly recall. Here is the resulting retarded transverse term:

These are two independent polarizations. All the values in play are complex numbers, but to separate them, Feynman multiplies the Txy by a factor of i to create

This was the spin 2 with projections +/-2 I discussed earlier.

There are many caveats that can and should be added, not the least of which being EM is a linear theory while general relativity is not.

Snarky puzzle: Draw pictures of spin 0, spin 1 and spin 2. If you get stuck, think about a drain for spin 1 and a water balloon for spin 2. Spin 0 is the source for all.

Next Monday/Tuesday: The Holiday card