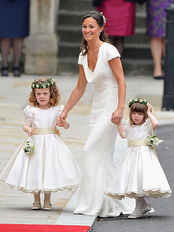 The strong equivalence principle is a stately beauty queen of an idea. In the simplest of dresses, she refuses to dance with any theory except general relativity. The mundane reason for mass is beyond her concern. My call own effort at unifying the symmetries found in the standard model with gravity "GEM" for Gravity and EM, not to be confused with gravitomagnetism which sometimes goes by the same acronym. A duality between metric and 4-potential theory extends a hand between a metric explanation of gravity and Newton's scalar theory moving up to a 4-mansion.

An obligatory cancellation in the GEM Lagrangian provides a field theory justification for the strong equivalence principle.
If the Higgs boson is found, this house of cards collapses. If the Higgs is ruled out over the reasonable range of masses to 95% confidence, join the evolution.
click or skip this reading of the blog
Begin with Einstein's statement of the weak equivalence principle:

It is only when there is numerical equality between the inertial and gravitational mass that the acceleration is independent of the nature of the body. 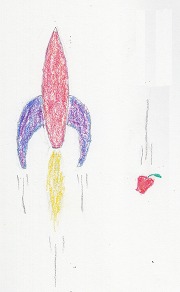 Accounting Jerk, I don't cut anyone slack, not even The Most Revered One. Newton's gravitational force law written out in full includes the rocket science term as an effect of gravity (perhaps Newton never wrote that one out either, which would be cool). I am not interested in a great approximation of the truth.

The systematic dismissal of the rocket science effect of gravity reminds me of the collapse of the housing market. Wall Street was given the keys to the money of mortgages. The quants, many trained as physicists, constructed models of how the markets would change, and how the changes in those changes would change. They understood it so well, they sold insurance whose market value was claimed to involve more money than the combination of the stock and mutual fund markets.

They did forget to model what would happen if the value of real estate dropped, because of course that never happens.

Here is Newton's gravitational force law written out in full:

Gravity is broken in a variety of ways (enjoy the PHD Comics version if you haven't already). Research is concentrated on stuffing the ballot box, adding to the causes of gravity. I want to recount all the votes in the state, which worked in Minnesota but was blocked by the good brother in Florida.

The first tests of the weak equivalence principle were done by Galileo, rolling balls down inclined plane (caveat: I haven't had the time to check if he rolled balls made of different materials down the v-shaped planes. If he did do that sort of thing, wood versus glass say, then that would constitute the first equivalence test. Please comment if you know relevant details and I will edit the post). Everything obeys the same gravitational law. Proving this point requires the scientific method.

People believe heavier things will fall the slightest bit faster than lighter things. That gut feeling is based on merging aerodynamic resistance with gravity to make a theory of falling. The weak equivalence principle is easy to get along with, just end up with a metric that is a solution that uses only a mass M in the theory. Do not junk up the equations with terms for bosons, fermions, or chirality.

Here is a statement of the strong equivalence principle:

has the minimalist pole position: no rank 2 field theory can be simpler. The GEM work is trying to get into this exclusive club by working a floor below as a rank 1 field theory. I have shown how the exponential metric is a solution to the hypercomplex gravity field equations in an earlier blog. Rosen developed a theory that also has the same metric. Rosen's work introduces a flat background metric. The extra field breaks the strong equivalence principle. It also provides a place to store energy and momentum, leading to a prediction of dipole gravity wave emissions. That prediction has not been confirmed in the analysis of gravity wave energy loss in binary pulsars, thus invalidating Rosen's efforts. The problem with dipole gravity waves is a common killer for alternatives to general relativity.

There is only one metric in the hypercomplex gravity work. Using the magic math of duality, I have shown a 4-potential solution to the gravitational Gauss's law field equation is identical to that using the exponential metric. The duality forms a bridge to Newton that gets light bending around the Sun half right. Partial duality is like being partially pregnant. Newton's theory must be expanded from a scalar theory to a 4-vector to be dual to a metric approach for light bending experiments. By working on a different rank than general relativity, GEM has a chance to play nicely with the strong equivalence principle.

There are two particles that may play a critical role with mass, but neither has been seen. The first is the graviton. The graviton is massless, so zips along at the speed of light. It cannot be spin 0 because light bends around the Sun. the simplest case that would mean like charges attract is spin 2.

The standard model as originally conceived had only massless particles. That is in violent disagreement with observation. The symmetries had to be preserved while bringing in mass. The gang of six had the same idea, a spin 0 field, later to be known as the Higgs boson. Nature may have a more complicated collection of particles up her sleeve, but so far, no cards have appeared (I may have to edit this statement at a later date). The first job of the Higgs is to provide mass to the particles involved with the weak force, the W+, W-, and the Z. Perhaps using a Yukawa potential, the Higgs could provide mass to a long list of fermions. If no Higgs is found, all bets are off.

A Lagrangian is every way energy can be traded inside of a box. Here is a list of things to look for in a Lagrangian dealing with mass:
Two Lagrangians will be looked at with this list in mind: general relativity and GEM.

Einstein guessed at his field equations. 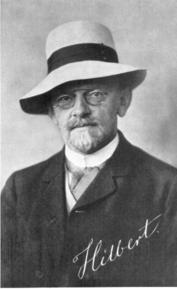 Hilbert derived the field equations from the Lagrangian. Here is Hilbert's starting point:

The other term for matter fields is not so elegant. There is far more freedom to do as one pleases: simple (a cloud of non-interacting dust) or complicated (anything else). The Riemann curvature tensor is complex due to the intricate rules of its math machinery. The paucity of guidelines for the matter Lagrangian is a greater challenge. The mystery black box of general relativity is the matter term.

Let's pick apart this two letter Lagrangian. The gravitational mass goes into the Ricci tensor. In a vacuum, the curvature of spacetime all flows from the Ricci scalar. The inertial mass is somewhere in the matter Lagrangian. It is straightforward to justify the strong equivalence principle in the vacuum since the only player on the stage is the Ricci scalar. With the matter contribution, the story may get more complicated. To be honest, I don't have a deep enough training in general relativity to know if there are built in safeguards to the matter Lagrangian to assure consistency with the strong equivalence principle. I bet the only matter Lagrangians that get published are consistent, but how about pathological cases?

General relativity is silent as to why anything has mass. GR is not a player in the Higgs derby.

Here is the GEM Lagrangian:

The gravitational mass is in the terms with the hypercomplex products, indicated by the boxtimes symbol. The hypercomplex field strength depends on this gauge:

So can we finally stand on a rock solid reason for mass? Sorry, but I have been trained to underplay a hand. The most important message for a general reader to take home is the GEM work provides an utterly different reason for mass that what is on the market today. The Higgs mechanism is a solution that plays nicely with all other work on the standard model. The GEM work plays great with Maxwell, the good symmetric twin, but flips the bird to GR and keeps the symmetries but drops the tensor products found in the standard standard model. Oops.

The ice is thin here, but I will give it a try. Most particles in the universe have no mass. By most, I mean look at ten billion particles chosen at random, and only one will have mass. The Universe is not structured randomly: stuff with mass congregates in planets, stars, and galaxies. The massless do not have a story to tell. For them, a change in time is the same as a change in space.

Contrast that with particles with mass. They can tell a story. If the relativistic velocity between two particles is near unity, the story must be brief. For the particles still sitting on Earth, the shared stories have lasted at least 4 billion years. 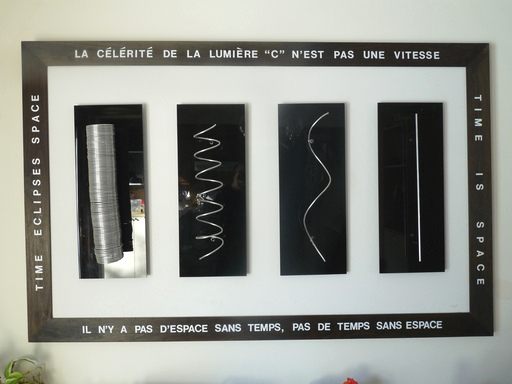 "The Speed of Light According to René Magritte"

I get this message every day with my gluten-free waffles and maple syrup. From a math wonk view, the gauge term is zero for the massless, and not zero for the massive. This is the edge of what I know.

This is not as bad as it appears: do it one time, the rest are variations in the signs of different terms. Take the group U(1) pointed in the direction of (1, 2, 3, 4) and feed that group into these eight quaternion polynomials. There should be one obvious property of the ones where the gauge happens to be equal to zero.


Bet against the Higgs being found, buy the t-shirt

Next Monday/Tuesday: Seeing the Wave Function