Doug Sweetser
I am white. I am liberal. I went to a good college, but some might argue that I didn't get a good education. Certainly I like to study science to this day. Let me tell a medical story I went through which might be germane to a blog by Hank, "Celiac: The Trendy Disease For Rich White People".

I have always been liberal about eating, as in I eat anything. I was skeptical about all food allergies. I also have insulin dependent diabetes. That is a disease that can kill you any day, but I am approaching my thirtieth year.
Three summers ago, my energy levels were dropping. That can sound vague, so let me be more precise. I was car pooling with my wife, one of those trendy, liberal things to do.  Note, not only was it cheaper, a good thing, but we could talk, good for the relationship. The drive together was all of a half hour. I had to fight to keep awake. It got to the point where she had to drive after fifteen minutes to avoid me falling asleep at the wheel. That kind of tired. Odd, but that was not going to get me going to the doctor, we had a work around.
I had a low glucose reaction at two swing dances. I ate food, but my glucose didn't rise. That made NO sense to me. Food in gut MUST go into blood, right?  Where else could it go? It didn't make sense, but that scared me. My one line of defense against a killer low blood glucose reaction is to eat, and that simple system was broken.  That also did not get me to the doctor.
It was the diarrhea. Three "solid" weeks of it. Lost ten pounds. I went to one of those gastrointestinal specialist in uber liberal Boston. He signed me up for a test where they served me radioactive egg whites (tritium), then watched the gamma rays as the egg whites moved through my gut. Turns out I was not closing the valve at the base of my stomach, a bit of nerve damage that is not unusual for a diabetic.  There is a medicine for it, at least in Canada, not the US.
He also did the blood work to test for Celiac disease and put me asleep long enough to snake a biopsy roto-rooter like device down my throat to cut out a piece of my small intestine.
He called me with the news: the blood work had slightly elevated antibodies, and he was able to see a few white blood cells in the intestinal walls.  Based on those tests and my story, he concluded I had celiac disease.
I took the day off.  I spent most of my in the pantry throwing things away.  Then I made my most expensive journey to Whole Foods Market, spending $350 to restock the pantry with gluten-free products.
Compared to diabetes, celiac disease is a piece of gluten-free cake.  Have no gluten in the house, then make whatever you want.  Those with celiac disease lobbied the government and food industry to make labels that are relevant to people with food allergies, and largely they have one that effort, bravo for all that difficult work.  My food bill is larger, but it is doable even in the non-Whole Foods grocery stores.
At restaurants, it is now easier to be gluten-free.  One approach is to order the most expensive item, usually a steak with potatoes.  Salads without croutons often work.  Even better is that many restaurants have gluten-free menus.  Only lobbying efforts did that, so I thank those folks.
These are the two sets of amino acids my body is reacting to:
Glutamate-Glutamate-Glutamate-Proline
Proline-Serine-Glutamate-Glutamate
My T-cells don't like this particular combination of amino acids.  My T-cells see that in the gut and go on the attack.  In the process they damage the villi that absorb food.  These two stretches of polypeptides are found in the gluten, but not in rice or potatoes.
Here is the part that surprises me to this day: I was really sick, I felt awful.  I was waisting away.  Yet the diagnosis was based on a slightly elevated antibody count and a few errant cells seen in a biopsy.  I had thought there would be a more black and white test, but that is the state of the art.  It did help explain the previous decade of anemia I had (low iron).  The malnutrition was due to a low-level, decade long assault on my intestine by my immune system.
After restocking the pantry, the weight loss through diarrhea stopped.  I can now drive myself into work without falling asleep.  I have no idea why in my mid 40's my system shifted the assault into a high enough gear for me to take action.
Like Lady Gaga, I am on a gluten-free diet hoping to lose 15 pounds and get decent looking abs (I hope to get a pack, less defined that a 6-pack, but far better than the current overhanging gut).  I was able to put on the weight with a gluten-free diet, so I know the presence or absence of gluten is not relevant. 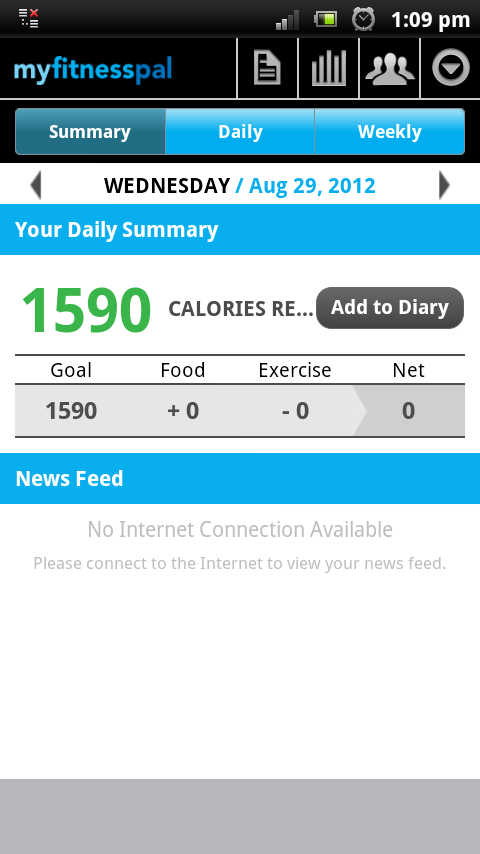 I am using two bits of technology.  One is an app from myfitnesspal.com for keeping track of all calories I eat in a day.  There have been many occasions where I say to myself, "Do I actually want to record that?" That little barrier is enough to block some consumption.  All kinds of little extra calorie routines have dropped out of my day because I record data.

It is the ease of adding data that allows me to do daily recordings.  They have a big database of foods and the calorie breakdown.  I could not do this with paper and pencil, too much work.
I have also purchased a fitbit from, you guessed it, fitbit.com.  This is a digital pedometer, a device with both an accelerometer and an altimeter.  The altimeter is able to tell if a fight of stairs have been climbed.  Knowing there is a little device that keeps track of the data has changed my behavior.  I work on the second floor.  I had always gone to work by climbing one flight of stairs.  Now I go up to the fourth floor, then down to the second.  I recently got my skydiver badge for doing a thousand floors.  Due to open APIs, the data from fitbit makes its way over to myfitnesspal. 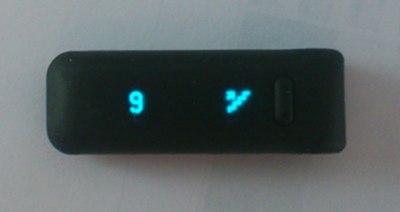 The real size is about a stick of gum.  Looks like I have done 9 flights of stairs today.
By eating between 1000 and 1500 calories a day, I am losing weight.  It is impressive how slow the process is.  A good week I will drop a pound, more typical is only a half pound.  The number varies depending on hydration, showing gains in some weeks due to drinking fluids before getting on the scale.  I can see why so many people give up on dieting.  It requires so many small decisions and our bodies want to stay the same.  The loss is so slow it is easy to give up.  ANY time I get a chance to pig out with free food, my body wants to do so.
Wheat is an excellent source of nutrients, one of the best there is.  Too bad my body fights it.  All the PR work to get this condition known will necessarily lead to errors in self-diagnosis.  One might say self-diagnosis by its very nature has a high error rate.  Anyone who does a self-diagnosis should doubt themselves.
The broader message I choose to take from Hank's blog is that all forms of self-diagnosis have a high error rate, whatever the condition.
The Stand-Up Physicist
More Articles All Articles
About