A recent analysis of published data on human exposure to bisphenol A (BPA) revealed more than 140 studies with over 85,000 data points from 30 countries.  Taken together the data show that exposure to BPA around the world is hundreds to thousands of times below the science-based safe intake limits set by government bodies.

That’s already far more data than is available for most chemicals, but the data just keeps on coming.  Health Canada recently released an important new report with data on exposure of Canadians to a variety of chemicals.  Along with BPA, the Fourth Report on Human Biomonitoring of Environmental Chemicals in Canada provides exposure data on 53 other environmental chemicals for more than 2,500 participants throughout Canada.

It’s important because without knowing how much of which chemicals we’re exposed to, it’s difficult to know whether those chemical exposures are safe or not.  After all, dose does matter.  If you’re not sure about that, imagine taking a bottle of aspirin next time you have a headache.  You might get rid of your headache, and a lot more.  In particular you might get rid of your life since two aspirin are safe and effective for the headache but a whole bottle of aspirin could kill you.

The new report is the fourth in a series that together provide data on BPA exposure to the general Canadian population (ages 3-79 years) over 8 years (2007-2015).  The new data confirms that exposure of Canadians to BPA continues to be very low.  Similar to what has been reported in other countries, typical exposure to BPA in Canada is more than 1,000 times below the safe intake limit set by Health Canada.

In addition, the new data adds to what is probably the most comprehensive database on exposure to BPA for any country.  Canadian researchers have also published results from four large-scale exposure studies on potentially sensitive subpopulations (pregnant women and infants) and the First Nations people.

The data from all reports consistently show that exposure of Canadians to BPA is far below Health Canada’s safe intake limit for all of the populations studied.  Importantly, the temporal data indicates that exposure to the general Canadian population is decreasing with time, moving in the direction of a higher margin of safety.

What Did Health Canada Do?

The survey also collects blood and urine samples in its biomonitoring component for analysis of various environmental chemicals, which is where BPA enters the picture.  It’s primarily used to make polycarbonate plastic and epoxy resins and those materials are widely used in products that make our lives better and safer every day.  Our use of those products raises the potential for exposure to trace levels of BPA.  Along with benchmarking chemical exposures, the biomonitoring data can be used to assess the need for policies to protect the health of Canadians from exposure to chemicals.

What Did The Media (Mis)Report?

Most likely you didn’t see any of the limited media coverage on the report, but you didn’t miss much since it appears the media didn’t actually read the report.  The headlines proclaimed that Health Canada found BPA in the blood of more than 90% of Canadians.  That may be an eye-catching headline, but Health Canada didn’t actually look for BPA in blood, and for good reason.  Had they done so, they almost certainly would not have found any.

It’s well known that our bodies efficiently convert BPA to a biologically inactive metabolite after exposure.  Because what goes in (exposure) is quickly eliminated in urine where it’s easy to measure, experts from around the world agree that “urine is the best matrix for epidemiological assessment of exposure to BPA.”  And that’s exactly what Health Canada did.

What Does The Data Mean (And Not Mean)?

Perhaps the most glaring omission from the media stories is a point so important that Health Canada included it in its short “Backgrounder” on the report.

“It is important to note that the presence of a chemical in a person’s body does not necessarily mean that it will affect their health.”

The report documents that BPA, in the form of its metabolite, is present in urine, which means exposure did occur.  But what does that data mean for our health?

Fortunately for BPA, it’s relatively easy to interpret the data with respect to health.  Along with other government bodies, Health Canada has already determined a safe intake level for BPA.  In a previous study, Health Canada researchers further determined the amount of BPA that would be measured in urine if exposure occurred at the safe intake level.  That value is known as the Biomonitoring Equivalent (BE) for BPA.

Comparison of the new data with the BE reveals that typical exposure to BPA in Canada is fully 1,000 times below the safe intake level set by Health Canada.  The data strongly supports Health Canada’s earlier conclusion that “Bisphenol A does not pose a risk to the general population, including adults, teenagers and children.”  But you wouldn’t have found that in the media coverage either.

How Does The Data Compare With Previous Studies?

With the data provided in this new report, Health Canada now has data on exposure of the general population of Canadians to BPA over an 8-year period from 2007-2015.  Although Health Canada has previously concluded that BPA does not pose a risk to the general population, exposure data over extended periods of time is important to know whether there are any significant changes in exposure.  Changes are not necessarily good or bad, but might be signals that further evaluation is needed.

A trend towards higher exposure might suggest the need to reevaluate Health Canada’s conclusion, or to consider whether any policies should be implemented or revised to limit exposure.  In contrast, a trend towards lower exposure strengthens the conclusion by increasing the margin of safety and indicates that existing policies are adequate to control exposure.

The data on BPA exposure from the four reports shows a clear trend towards lower exposure over time.  Although the data cannot inform on the specific source of exposure or why exposure is decreasing, the data does indicate that current use patterns for BPA and policies to control exposure are adequate to ensure a wide margin of safety. 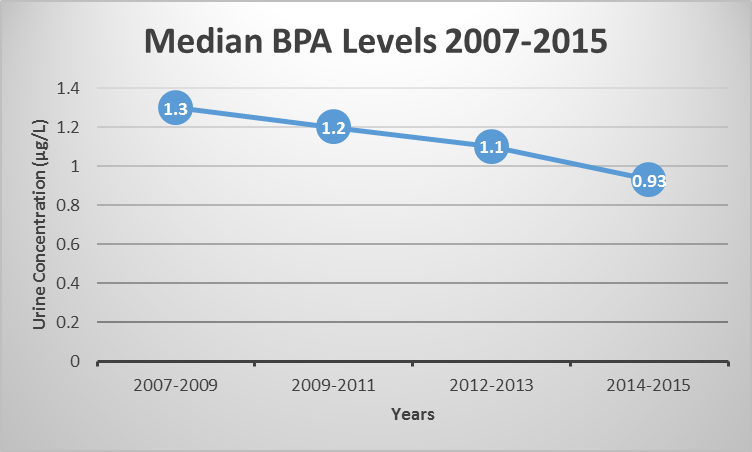 In addition to the series of reports on the general population of Canadians, other Canadian government researchers have published four other studies that provide BPA exposure data on potentially sensitive subpopulations.  These include three studies on pregnant women (1, 2, 3), one of which included data on infants, and a study on the First Nations people.  Perhaps not surprisingly, exposures are similar for all populations examined with the notable exception of infants.

It is generally believed that most exposure to BPA is through the diet.  Since infant diets are generally different from adult diets and more limited, infant exposure to BPA will not necessarily be the same as adult exposure.  Although data is limited to one study, infant exposure is significantly lower, which suggests that existing policies to control exposure are adequate for infants as well as adults.  The data also indicates that Health Canada’s conclusion that BPA does not pose a risk to Canadians is applicable to infants. 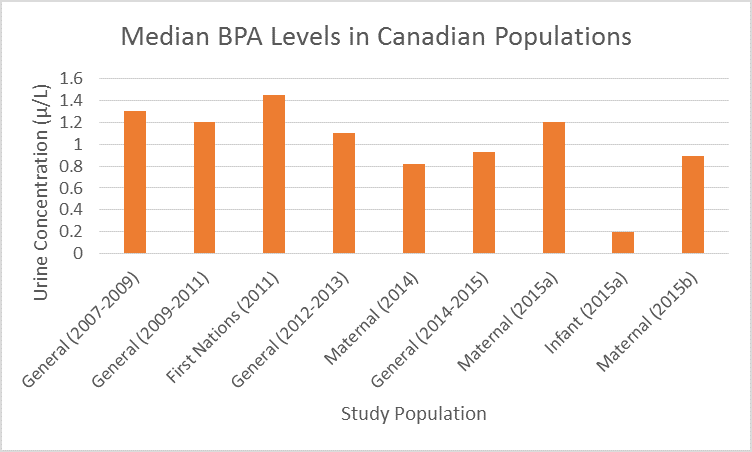 How Does The New Data Compare With The Rest Of The World?

It’s not just Canadians who need not be concerned about BPA.  A recent analysis from a group of researchers in China revealed that exposure to BPA is very low in every one of the 30 countries where it’s been measured.

That analysis included data from studies on exposure to BPA that have been published in the peer-reviewed scientific literature.  All told, the researchers found more than 140 studies with data on over 85,000 participants in 30 countries.  The results from the new Health Canada study reaffirm that exposure of Canadians to BPA is similar to the exposure levels measured in the rest of the world.

The extensive data on exposure to BPA from all of these studies leaves little doubt that human exposure to BPA is extremely low and far below science-based safe intake limits.  Perhaps the US Food and Drug Administration says it best in a Q&A on its website:  Is BPA safe? Yes.