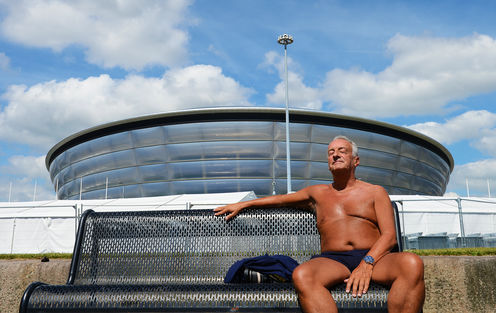 A man relaxes in some decidedly un-Scottish weather outside the venue for this year's Commonwealth Games in Glasgow. AAP Image/ Dave Hunt

It’s clear: 2014 has been a scorcher. As well as probably being the hottest year on record globally, regional and local climate records have tumbled too.

Australia recently had its hottest spring on record, beating the previous record set only last year. Human influences on the climate very likely played a significant role in this event, just as they have globally. Most of the world’s land areas have been significantly warmer than average this year. Temperatures are shown relative to the long-term average for 1981-2010. Climate Central/ECMWF, Author provided

Europe is also heading for its hottest year, with widespread above-average temperatures across the continent. Nineteen countries, stretching from Iceland to Serbia, are likely to set new records. 2014 was a scorcher across almost all of Europe. Temperatures are shown relative to the long-term average for 1981-2010. Climate Central/ECMWF, Author provided

Average yearly temperatures across the whole continent show that 2014 is the hottest year so far in a decades-long upward trend.

In three independent analyses coordinated by Climate Central, researchers from the UK, the Netherlands and Australia used different data sets and methods to answer this question. The full details of these projects can be found here.

One group, based at the University of Oxford, used a very large number of climate simulations to compare 2014 in the real world with how it might have been in a world without humans. These large numbers of simulations were based on a single climate model and the same ocean conditions, but with different starting points for the atmosphere at the beginning of each simulation.

To get such a large number of simulations the model was run on home computers by volunteers through a distributed computing project called weather@home.

Comparing the model runs of 2014 with and without human influences revealed that human activities played a very substantial role in the record temperatures of 2014. Even at a national scale, where year-to-year temperature variability is higher, there is at least a tenfold increase in the risk of hot years like 2014 because of human activities.

Another group, led by Geert Jan van Oldenborgh at the Royal Dutch Meteorological Institute, statistically analysed long-running climate observations, which even included data from tree rings sourced by Juerg Luterbacher, to extend the temperature records back to 1500.

Their analysis pointed to at least an 80-fold increase in the likelihood of extreme European temperatures, such as we saw in 2014, as a result of human influence on the climate.

Finally, our own group based at the University of Melbourne and the Australian National University studied the European record 2014 temperatures using a range of simulations from several different climate models. We used simulations with and without human influences on the climate, and compared the frequency of hot years like 2014 in each set of model runs.

So, why do these analyses reach different numbers for the extent of humans' climate influence?

While the main message from these three analyses is clear, the details of just how much climate change has increased the risk of record hot years in Europe are more difficult to pin down. Using different data sets and methods inevitably delivers slightly different answers. In fact, the different answers all agree with each other within the margins of uncertainty estimates.

All of these different analyses and uncertainty tests point to very substantial increases in the chances of record hot European years as a result of human-induced climate change.

The main message is indisputable.

It is clear that human activity played a substantial role in the unprecedented warmth of 2014 over Europe. Similar findings have been made for other regions of the world, such as Australia for its record hot 2013.