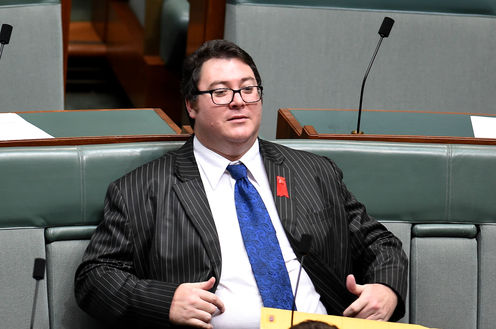 Nationals MP George Christensen told Parliament that the hot temperatures of 1896 have been "wiped from the official record". It's a bit more complicated than that. AAP Image/Lukas Coch

“How could it be getting hotter … if it was really hotter 118 years ago? It’s relatively simple: the early years are simply wiped from the official record.” – Nationals MP George Christensen, House of Representatives, October 29th.

The Federal Member for Dawson is the latest to call for an inquiry into the Bureau of Meteorology’s climate data, joining others who have attacked the Bureau’s efforts to adjust the temperature data since 1910 to take account of problems such as changes in the location of the observations. This is despite the fact that independent observations from satellites confirm the reliability of the Bureau’s work.

Mr Christensen also questions why the Bureau’s official historical temperature record only starts in 1910. He argues that the apparently hot temperatures in 1896 (such as the 50C recorded in Camden, New South Wales, as well as scorching temperatures in Victoria and Western Australia) demolish the Bureau of Meteorology’s claim that 2013 was the hottest Australian year on record.

His question seems fair – if temperatures were indeed hotter in the late 19th century than now, why are these temperatures not part of the official record?

The problem with the 19th-century data is that the temperatures were recorded in different ways to the standard method that has been used since about 1910.

Most people are familiar with the white Stevenson Screens you can see at any weather-observing site around the country. But there is a great deal of documentary evidence indicating that, for much of the country, such screens were not widely used in Australia during the 19th century.

Meteorologist Clement Wragge, in an 1886 report (Wragge, C. L. 1886. Meteorological Inspection and Proposals for a New Meteorological Organisation, Report to the Colonial Secretary, Brisbane, presented to the Queensland Parliament, 14 pp.), pointed out that some thermometers:

… are hung under verandahs and over wooden floors; others are placed against stone walls and fences. Such exposures (not to mention the several remarkable instances of thermometers being placed and observed indoors) give results which are not only not intercomparable and so valueless to meteorology, but which are affected by artificial and secondary conditions, giving misleading values.

Wragge convinced the Queensland government to introduce the Stevenson Screen as the standard method for housing thermometers, but failed to convince meteorologists in the other Australian colonies. So for much of the country, temperatures continued to be recorded on what was known as a Greenwich (or Glaisher) Stand, or even just mounted on a wall, leaving the thermometers exposed to radiation from the ground and their surrounds.

Even where Stevenson Screens were used, they were often poorly maintained. In 1907, the newly appointed Commonwealth Meteorologist Henry Hunt complained that many of the screens in use at the time had warped and cracked, potentially allowing direct sunlight occasionally to fall on the thermometers.

So did the different ways of exposing the thermometers seriously bias the 19th-century observations, relative to modern readings? The answer is yes, and we have Charles Todd (of overland telegraph fame) to thank for answering this question.

In 1887, Todd set up what must be one of the longest-running scientific experiments ever, when he installed thermometers in a Stevenson Screen and on a Glaisher Stand at Adelaide Observatory. Observations were taken in both exposures until 1948.

The results of this 61-year experiment show that summer daytime temperatures measured using the Glaisher Stand are, on average, 1C warmer than in the Stevenson Screen. And this was at a well-maintained station – if a Glaisher Stand is not used properly, direct sunshine can fall on the thermometers, dramatically increasing the warm bias (and this was probably what happened at some stations, given that we know equipment was not always well maintained).

So, for much of Australia, temperatures recorded before Hunt’s insistence on standardizing weather stations in about 1908 would be biased towards warmer temperatures, relative to modern observations. The poor maintenance noted by Hunt in 1907 would also lead to biased temperature recordings compared with a modern, well-maintained site.

This meant that when my former Bureau colleagues and I began work in the early 1990s on producing a credible Australian temperature record, we quickly realised that it would be very difficult to compare the 19th-century temperature data with modern observations. We thought it safer to start our record at a date when we knew thermometer exposure had been standardized.

That’s why the Bureau’s official temperature records start in 1910 – before that date we have good grounds for believing that the data are poor and biased (and would be difficult to adjust for the many problems). But earlier data are available on the Bureau’s website. For instance, data for Bourke, NSW, are available all the way back to 1871.

Other groups have been rather more “brave” than we were in facing this task. You can go to the Berkeley Earth website and look at the results of that group’s efforts to adjust the early data for such problems with exposure and instrumentation.

You will find that, after the adjustments they make to the data (to ensure the early data can be reliably compared with modern data), some years in the 19th century were indeed warm. But nothing like the heat we endured across the country in 2013.

According to Berkeley Earth, the Australian average daily maximum temperature in January 1896 was about 1C hotter than the 1951-80 January average. But January 2013 was a full 1.5C hotter again – really, the late 19th century temperatures don’t come close to modern extremes.

Only by ignoring the many factors that we know affect temperature observations, and the fact that the way temperatures were observed in the 19th century was very different to how we do it nowadays, could one confidently conclude that the late 19th century in Australia was as warm as the past few years.

False. The poor quality of early data makes it impossible to conclude with confidence that 1896 was Australia’s hottest summer – the best available estimate is that it was considerably cooler than 2013.

The pre-1910 data have not been “wiped from the record”. They are still available on the Bureau’s website, but are not included in the official record because they cannot be compared easily with modern data.

The FactCheck is correct that high temperatures have not been “wiped” from the Bureau of Meteorology’s temperature record. Temperature measurements taken before the official climate record starts in 1910 are excluded because they are of dubious quality. The pre-1910 measurements are biased by poor instrumentation, but remain available through the Bureau for analysis.

The Bureau’s official temperature record provides accurate, reliable and peer-reviewed climate data - anyone can access the data and read the quality-control procedures in the accompanying technical documents. The official record, showing 2013 as our hottest year on record, is also consistent with temperatures measured from satellites. – Sophie Lewis

Have you ever seen a “fact” that doesn’t look quite right? The Conversation’s FactCheck asks academic experts to test claims and see how true they really are. We then ask a second academic to review an anonymous copy of the article.

You can request a check at checkit@theconversation.edu.au. Please include the statement you would like us to check, the date it was made, and a link if possible.

Article author Neville Nicholls, Professor, School of Earth, Atmosphere and Environment at Monash University, was a climate researcher at the Bureau of Meteorology from 1971 to 2005. He has received funding from various organisations for climate research, including work to produce credible, longterm time series of Australian average temperature and other variables. Reviewer Sophie Lewis is a Research Fellow at The Australian National University node of the ARC Centre of Excellence for Climate System Science.