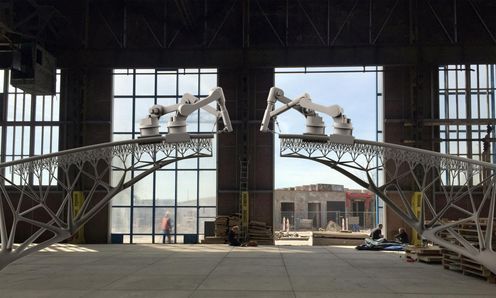 A company in the Netherlands is building a bridge across a canal in Amsterdam using 3D-printing robots.

It seems that such attention-grabbing headlines appear regularly to declare how 3D-printing is destined to revolutionize manufacturing of all kinds. If the idea that key manufacturing products such as cars, aircraft – or indeed bridges – built by 3D printing sounds like hype, you’re mistaken.

It’s human nature to be suspicious of new things: we find them both attractive and worrying. The manufactured world around us has been made by cutting and casting and forging for many centuries. We are very comfortable with those processes and we believe that engineers and scientists can exert complete control over them, using these technologies to create the safe and predictable world (on an engineering level at least) we inhabit. This new way of making through 3D printing, in contrast, seems to have appeared suddenly and, somewhat reminiscent of the way it creates, almost out of thin air.

3D printing, or additive manufacturing as it’s also known, has in fact been in use since the 1980s, beginning as a means of prototyping objects through various stages of development. Decades later, we have gained a huge wealth of knowledge and understanding of how the process works. We may marvel at the wonder of it all – and the weird and wonderful shapes that can be created through 3D printing. But the main concern for many is that the properties of 3D-printed materials are equal to their conventionally manufactured equivalents.

To answer this concern, generally speaking a 3D-printed component can have comparable properties to one made conventionally. For example, some surgical implants are already made in this way. Many people have a 3D-printed hip implant, for example, and we know that 3D-printed parts have been a feature of Formula 1 cars and military aircraft for years – and perform very well in those applications. What we are seeing now is that the technology is becoming more mainstream – and that change is helping drive a huge explosion of creative thought about how, and where, we make things.

Surgical implants and even biological tissues can now be 3D printed. Andrew Milligan/PA

Many of the more ambitious ideas about large-scale 3D printing emerge from laboratories and studios of artists and architects who see this as an opportunity to give their ideas physical form, enabling bespoke creations using free-form fabrication. Take for example this bridge in Amsterdam using torch-wielding robot welders: the company behind the project, MX3D, which was formed by Dutch architect and designer Joris Laarman, demonstrated its technology last year and has shown the courage of its convictions in performing this “research” in public.

Aerospace is another great supporter of emerging technologies, and large aerospace companies and supply chains are very clear that they intend to employ 3D printing as a means to manufacture airframes and engine components. In the US, GE, Lockheed Martin and Pratt and Whitney, and Airbus, Rolls Royce and GKN Aerospace in Europe have all made recent investments and announcements of products that employ 3D printing in the direct manufacture of complex components. It’s even a technique used for the manufacture of spacecraft.

Despite all these high-profile, major industrial users there is a feeling among many, still, that 3D printing is all hype that will blow over soon – that there is an element of the Emperor’s New Clothes about it.

If I were to draw a comparison with another field: in 2001 just as the internet was truly taking off worldwide, the author Douglas Adams made a radio program called the Hitchhiker’s Guide to the Future in which he recalled a number of conversations with those working in publishing, music and broadcasting.

They were interested to know what impact the emergence of computers would have on their industries – clearly hoping, he said, that the answer would be “not very much”. Of course 15 years on we know just what a significant impact digitization and the internet has had – changing business models, consumer behavior and expectations beyond imagination.

The reality is that we don’t know where 3D printing will lead us but its potential to change the way we manufacture the things we use in our lives is enormous. As with those in Adams' program, perhaps hoping that the impact of this emerging technology will also be “not very much” is not the right approach. Instead, as with the revolutionary effects it has had on the media, embracing the opportunities it affords us as manufacturers could take us in directions we hadn’t previously considered possible.

By Iain Todd, RAE and GKN Chair in Additive Manufacturing at University of Sheffield. This article was originally published on The Conversation. Read the original article. Top image: Heijmans