As lifestyles in the UK have become more stressful and pressurized, people have started to look at alternative ways to live. Some are now seeking out more of a community feel to their home lives, exploring the option of joining an “intentional community”.

Intentional communities come in many different shapes and sizes. They are, simply put, groups of people who choose to share their lives and live communally with others. This is more than just, say, people who share a block of flats, but on the other hand they have moved on from being stereotypical hippie communes. Intentional communities can be as broad as a group of people squatting together as a protest community, or a group coming together to self-build . They are places where people “live together or share common facilities and … regularly associate with each other on the basis of explicit common values”.

Co-housing in particular – where people buy a “share” of the property and land – is gaining popularity in the UK, and has recently benefited from government funding. There are currently more than 60 groups in the process of developing new co-housing projects, with more on the horizon.

At the same time, other forms of intentional community such as housing co-ops (individuals join for a nominal fee a cooperative which owns the property, and are then both in charge of the property and a co-op tenant) are also becoming more sought after as the cost of renting becomes prohibitive.

There are countless other benefits to living in an intentional community – here are just four more reasons why it may be for you.

1. Collective ownership can give you more

Living in a grand house with its own boating lake is out of reach for many – but not for members of the Dol-Llys community, who live near Lllanidloes in mid-Wales. Dol-Llys was originally a regency house owned by the county council, but was bought by six families in 1992. The families all share the 14 acres of land which includes a man-made boating lake.

Thundercliffe Grange just outside Rotherham, meanwhile, boasts its own woodland, a walled garden and a stable block.

The collective nature of intentional communities often means that when a group pools its resources, the members can significantly increase their buying power. The community of Cannon Frome share a Georgian manor in Herefordshire with its own banqueting hall, while those at Laurieston Hall, in Scotland, reside in an impressive Victorian mansion with 135 acres of woods, pastures and marshland. 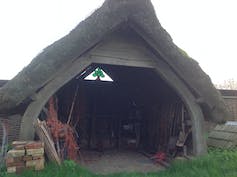 Although not all intentional communities are this grand, collective ownership enables groups to share other resources, too, such as meeting spaces, and communal tool sheds.

2. It can be good for the environment

Many housing cooperatives and co-housing projects share not just space, but also resources. In fact, researchers have found that communal cooking and eating saves on both energy use and food waste. In addition, intentional communities are more likely to participate in pro-environmental activities such as car pooling, collective laundry facilities and, in some cases, are self sufficient.

At Old Hall in rural Suffolk, the community of over 40 adults manages more than 70 acres of land, and has its own cows, chickens, sheep, pigs, bees and vegetable gardens. All meals are eaten communally and a large proportion of their food is grown or produced on site.

There is evidence that communal living, and in particular eating regularly with others, can enhance well-being and may reduce feelings of loneliness, too.

Some communities – such as the Older Womens Co-Housing project in north London – have been set up specifically as an alternative to living alone. Maria Brenton, a longstanding spokesperson for the London project, and advocate for senior co-housing, has carried out extensive research into the well-being aspects of community living and suggests that co-housing has the potential to “keep older people active, healthy and engaged, and reduces demand for health and social care services”.

Custom built co-housing projects like the one in north London often favour community interaction, and have this factor built into the very design of the site. For example, the homes at Lancaster Cohousing all face a shared pedestrian path, increasing social interactions and the feeling of community.

4. Communities aspire to be inclusive

Although they are well populated with graduates and even university lecturers, many intentional communities consider inclusivity to be a key principle, and work hard to be affordable to a diverse range of members. The ownership model behind LILAC, a community of eco-built houses in Leeds was designed to enable those on lower incomes to afford to join. Chapel Town Cohousing, also in Leeds, meanwhile. has a membership policy which allocates spaces to disabled people, people from minority ethnic groups or individuals who identify as LGBTQ.

If you are considering an alternative way of living, you are not alone. In fact, you will be in very good company.

By Kirsten Stevens-Wood, Lecturer, Cardiff Metropolitan University. This article was originally published on The Conversation. Read the original article.