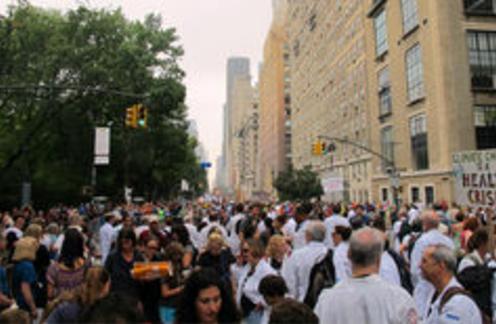 Groundbreaking pledges of funding from the French, 120+ heads of state attending, famous faces calling for greater action and less talk. It’s all happening this week in New York City, where I join the UN Climate Summit.

Hosted by Secretary-General Ban Ki-Moon today, it has been a ‘hit the ground running’ week leading up to this unprecedented event - with building expectation (some would say desperation) that this is where we might see major commitments from governments and an uprising of the public in favor of real climate action.

Tuesday morning in New York City and here is what we have seen so far:

But importantly, climate change is not just about polar bears, this is about you and me too. An important message emerging.

With the world watching, the rhetoric on climate is rapidly changing from one solely focused on the environment, to one firmly focused on global human health too. Hence my attendance.

Leading a charge in this space, the Global Climate and Health Alliance (GCHA) provides thought leadership regarding the overlap and interdependencies between climate with health - I have covered this before. But importantly, they also outline three actions for the health and public health communities for co-mitigation on climate and health.

“Put simply, we will have no health on a dead planet” - says the Stockholm Resilience Centre’s Johan Rockstrom. A hotter, more polluted world in which food scarcities, weather extremes, polluted air/water/land and greater geopolitical instability poses a major risk to global and local public health.

We must continue to work to make these links known.

The World Health Organization head states “climate change, and all of its dire consequences for health, should be at center-stage…whenever talk turns to the future of human civilizations. After all, that’s what’s at stake”. “Dramatic health benefits and associated cost savings would result from a global transition to clean energy, avoiding millions of early deaths each year through improved air quality” says GCHA. Urban areas are home to half the world’s population, but generate around 80% of global economic output, and around 70% of global energy use and energy-related greenhouse emissions.

Air pollution is a growing burden to human health and already kills an estimated 7 million people each year.

Rapid transition to active transport and cleaner energy alternatives will be a major focus of the Summit this week - hopefully with commitments and actions.

3. We need to make investment choices which benefit health.

Following an historic announcement by Hesta in Australia last week to pull any coal investments from their $26B retirement fund, this is a hot topic this week. Divestment is the concept of pulling invested funds away from companies or stocks which contribute to environmental damage - think big oil, gas and coal burners. Using investments as a political tool for change.

An American billionaire family, the Rockefellers joined more than 180 institutions — including philanthropies, religious organizations, funds and governments — pledging to sell assets tied to fossil fuel companies from their portfolios. This is seen as a momentous move and a powerful tool for forcing innovation and private-sector change.

Combined with the United Nations General Assembly week here in New York City, this is set to be a very big day for climate change. We can only hope that it is.

To follow live from home or your smart phone, use #climate2014.

Above all - get involved, stay informed… this is our future.

Alessandro R Demaio, Australian Medical Doctor and Postdoctoral Fellow in Global Health&NCDs at Harvard University, does not work for, consult to, own shares in or receive funding from any company or organization that would benefit from this article, and has no relevant affiliations.