Another Fourth of July is here, the time for backyard barbecues, picnics, cookouts, parades, swimming and fireworks.

One of those Independence Day pastimes, however, stands apart: fireworks. They’re a somewhat controversial topic in the US and are covered by a patchwork of different laws.

Delaware, Massachusetts and New Jersey all ban any kind of consumer use of fireworks. Illinois, Iowa, Maine, Ohio and Vermont permit sparklers and other novelty devices. Arizona permits the sale of novelty fireworks but not sparklers. New York allows fireworks in 31 counties, but not in New York City. California has banned fireworks in some counties because of drought conditions. The other 39 states impose no special restrictions.

Should fireworks be banned in all 50 states?

The last Gallup poll done on the subject in 2001 suggests fireworks are extremely popular. Almost two-thirds (63%) of all people polled planned on attending a fireworks show over the Fourth of July holiday, and 26% planned on setting off their own. This year’s figures should be much higher because the Fourth falls on a Saturday night. (When the 2001 Gallup poll was done, the Fourth fell on a Wednesday.)

While they are popular, using fireworks is dangerous. Most people don’t need the periodic warnings from fire chiefs and doctors about the danger of consumer fireworks to know that devices designed to blow up can cause serious injuries. Each year there is at least one horrific story about a child being maimed or killed by fireworks. 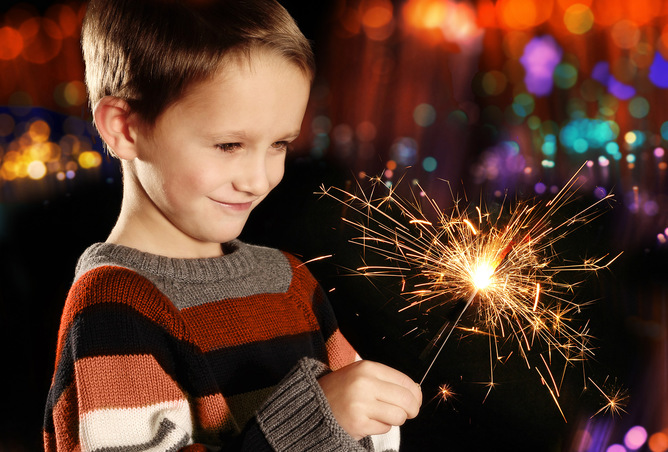 Is a sparkler too dangerous to give to a child? Credit: Shutterstock

The latest retail trade census showed that in 2012 consumers bought US$376 million worth of pyrotechnics from firework stores. This number is only a part of total consumer sales, since around the Fourth many convenience stores and other merchants temporarily stock fireworks, and these temporary sales are not included.

The overwhelming majority of consumer fireworks are imported from China, which is not unexpected given China invented them.

Official government figures do not break out professional fireworks companies separately because the industry is extremely small, and many Fourth of July shows are not run by professional firms but instead are set up by clubs, retired explosive experts from the military or fire department officials. However, the US manufactured about $200 million of professional fireworks and imported about $35 million more in 2012. Together this means fireworks are at least a $600 million per year business, and more likely around $1 billion.

Fireworks are restricted in states and counties because of two concerns: injuries and accidental fires.

The best data on these problems come from the “Alliance to Stop Consumer Fireworks,” which is an umbrella group of firefighting and medical professionals opposed to letting individuals use small fireworks.

The graph below adjusts injury data from the same anti-fireworks group (figure 1 here) for the growing US population. The graph shows the number of people per 100,000 who went to a hospital emergency room with a fireworks-related injury. While in the 1980s, about five people per 100,000 each year went to the hospital, by 2011 the number had fallen to about three. Number of people injured in the US by fireworks and requiring an emergency room visit adjusted for population.

Fireworks, of course, are amazing. My family and I have traveled far and wide to attend fireworks shows. Large explosions filling the night sky are simultaneously thrilling and terrifying.

Firecrackers, Roman candles, bottle rockets and cherry bombs are probably no safer today than they were decades ago. However, at the same time that rising quantities of fireworks are being used, the US is seeing fewer injuries per 100,000 people and fewer accidental firework fires. This suggests people in the US are being smarter and more careful when using fireworks.

Restricting fireworks in places facing drought, restricting their usage near dangerous locations like gas stations, banning young children from using fireworks and banning drunken adults from lighting them off all make sense. But blanket state- or county-wide bans that are not particularly well-enforced around the Fourth don’t make sense.

The patchwork set of rules and restrictions should be eliminated. People should have the freedom to light fireworks on the day set aside for celebrating freedom, the Fourth of July.

By Jay L Zagorsky, Economist and Research Scientist at The Ohio State University. This article was originally published on The Conversation. Read the original article.