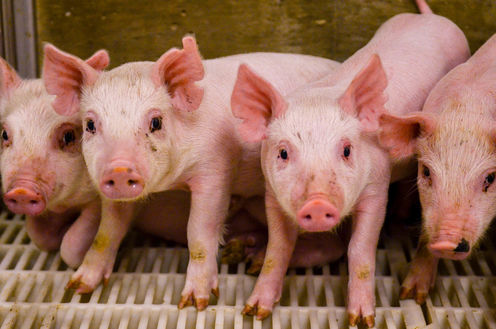 The clinical potential and ethical difficulty posed by gene-editing technology, which can “find and replace” targeted genes, is seemingly endless.

But while public attention is focused on whether we should use it to change the genes of embryos, application of the technology to genetically modify pig tissues and organs for transplantation into humans could potentially have a bigger and more immediate impact on human health.

While progress has been slow, trials have demonstrated benefit in patients with type 1 diabetes who are transplanted with porcine pancreatic cells. And gene-editing research published in October shows incredible promise for making xenotransplantation a reality.

The challenges of xenotransplantation

Xenotransplantation faces two major challenges: the risk of immune rejection and the risk of transmitting diseases from animals to humans (xenozoonosis).

Immune rejection of transplants among humans can be mitigated by carefully matching donor and recipient. But it’s all much more difficult in the case of humans and pigs. The genetic divide means the human immune system is primed to recognize the pig graft as foreign and to attack it.

In terms of xenozoonosis, of particular concern are porcine endogenous retroviruses. These are found in the pig genome and cannot be eliminated by bio-secure breeding. If these retroviruses become activated, they can cause serious infection in human hosts.

While no cases of such infections have been recorded in human recipients of porcine grafts, these viruses have been shown to infect human cells in vitro.

Scientists have explored a range of strategies – either reducing or suppressing the expression of porcine endogenous retroviruses in pig tissue – to mitigate the risk of transmission to humans. But these have limited efficiency and are costly.

Scientists from Harvard University have used the technology to target and inactivate porcine endogenous retroviruses in the genome of pig kidney cells. They showed more than a 1,000-fold reduction of viral transmission to human cells in vitro.

The researchers managed to target genes that sit on the surface of porcine cells, which are known to trigger a human immune response. Their work shows genuine possibility for porcine tissues and organs being modified and transplanted into humans without the need for immunosuppressant medication and with little risk of porcine endogenous retrovirus transmission.

But the gene-editing technology the Harvard scientists used is not without problems. A number of scientific challenges and ethical concerns remain.

Foremost is the uncertain safety profile of CRISPR/Cas9 gene editing. While the scientists found the technology didn’t cause any unintended mutations in the porcine genome, its use in non-viable human embryos has been reported to split DNA segments at sites that weren’t targeted. This raises the possibility it may cause mutations that could lead to cancer.

One of the great challenges of xenotransplantation is that pathogens occurring in the organ may be unknown. While the risk of xenozoonoses due to unknown pathogens is low, the potential risks are profound. And we should avoid scientific hubris in our enthusiasm for exploring the implications of this technology for xenotransplantation.

The technology also raises biosecurity and regulatory concerns, because in contrast with traditional gene modification techniques it’s efficient, cheap and simple to apply. As bioscience becomes “democratized”, technologies like CRISPR/Cas9 may be used by individuals or groups outside regulated research environments or with intent to synthesize virulent organisms to inflict harm on others.

The application of CRISPR/Cas9 in transplantation may also increase pressure for it to be used widely, in settings that are currently tightly restricted or controlled.

And the possibility that it could be used to change sperm, egg and embryonic cells, which are known as germline cells, raises the specter of eugenics and human enhancement for non-medical reasons. This could also lead to trans-generational risks.

While CRISPR/Cas9 may provide the impetus for progress in xenotransplantation that’s been lacking for almost two decades, only if it proceeds in an ethically defensible manner, and with robust regulatory oversight, will it gain widespread public acceptance.