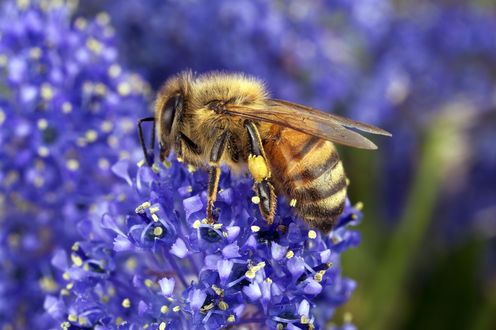 Honeybees pollinate a third of Australia's food crops. Losing them due to varroa might would cost the economy billions of dollars. David McClenaghan, Author provided

A nationwide outbreak of foot and mouth disease; an invasion of a devastating wheat disease; our honeybees completely wiped out. These are just three possible disastrous scenarios facing Australia; they’re considered in the Australia’s Biosecurity Future report published today by CSIRO and its partners.

Intensifying and expanding agriculture, biodiversity loss, and more people and goods moving around the world are the “megatrends” driving what we have called “megashocks” — new outbreaks of diseases and pests.

These three events alone could not only cost Australia’s economy billions of dollars, but would also devastate our agricultural industries and environment and severely alter our way of life.

How well prepared is Australia, and how would our biosecurity system cope with such a situation? For example, governments and farmers near Katherine in the Northern Territory are mounting an emergency response to deal with an outbreak of a new disease — Cucumber Green Mottle Mosaic Virus — and while this virus is not likely to create headlines, it is devastating crops, severely affecting the NT farming community financially and threatening industries elsewhere in Australia.

As part of the drive to help feed the world, Australia will have to increase agricultural production — both through intensification and expansion. Both of these processes could expose new biosecurity challenges.

The United Nations Food and Agriculture Organization (FAO) has forecast that food production will need to increase by 60% (compared to 2005/2007 levels) to meet demand in 2050.

This 2050 scenario could see the value of Australian food exports increasing by 140% compared to 2007 levels.

However, Australia’s agriculture sector is already constrained by limited soil and water resources and future intensification will bring its own challenges through herbicide resistance and more intensive animal production systems. These factors could all increase the impacts of a biosecurity incident, and reduce the industry’s ability to sustainably meet demand.

In 1973 Australia’s wheat production industry was devastated by an outbreak of wheat stem rust, causing an estimated A$200-300 million in damages. While wheat stem rust has been under control since that time, there are new threats on the horizon.

Currently sweeping the world is the even more virulent Ug99, and without stepping up our biosecurity, it is likely to reach Australia. Luckily in this case we have time to prepare by developing varieties resistant to Ug99, but we may not always have such forewarning. Intensifying food production alone may not be sufficient to meet global demand. We may also have to expand into new or previously marginal areas. This could expose agriculture to new biosecurity threats, some that we may not fully understand, through new pathways or new hosts for pests and diseases.

For example, there is considerable government and industry interest in increased agricultural development in Northern Australia. Various reports, including the recent Green Paper on Developing Northern Australia suggest that northern agricultural production could increase substantially through targeted use of soil and water resources.

But this could expose Australia to new biosecurity threats. There are already a number of established pests and diseases in NT. And, importantly, these small areas of northern irrigated agriculture could act as a target for exotic pests and as a bridge for exotic pests to enter, establish and spread southwards.

This could have more severe consequences for established agricultural systems in southern Australia. In 1998 sugarcane smut appeared in the Ord, Western Australia. It then spread to Queensland in 2006, ultimately costing a 10-30% reduction in gross margins thanks to loss of yield, and the cost of planting resistant sugarcane varieties.

So biosecurity needs to be explicitly considered in any plan to expand agriculture in northern Australia – we need to anticipate future threats and mitigate them where possible.

Invasive species are one of the most significant known threats to biodiversity and ecosystem services around the world. In Australia invasive vertebrates such as rabbits, feral cats, pigs and camels impose severe impacts on Australian habitats and wildlife.

But biodiversity is also important in underpinning the ecosystem services for agriculture and the economy. Healthy soil function, pollination, and natural pest control are all driven by biodiversity within agricultural landscapes. Over the past century, crops have lost 75% of their genetic diversity, making them potentially more susceptible to new pathogens or pests. A varroa mite on the head of a bee nymph. Gilles San Martin/Flickr, CC BY-SA

We rely on some species for the services they provide, such as the European honeybees which pollinate our largely non-indigenous crops. Australia is fortunate to be the only continent not yet affected by the devastating bee pest, varroa mite. There is very real potential for it to arrive and spread in Australia.

Elsewhere in the world, varroa mite is driving a complex of factors leading to a global decline of honeybees, and native pollinators are also threatened through pesticide use and habitat loss.

Losing these pollination services, would severely impact the 30% of food crops which are dependent on honeybees, particularly many fruits and vegetables. The impact on our economy would be in the order of A$4-6 billion each year.

The increased movement of people, goods and vessels around the globe increases the chance of biosecurity threats hitting our shores. That’s why our biosecurity border protection is so important.

Inadvertent spread of exotic organisms in shipping containers such as European house borer in Western Australia, on contaminated equipment or carried by people such as the introduction of fire ants, as well as the spectra of deliberate introductions which haven’t yet happened in Australia show the scale and breadth of the issues we have to deal with. An outbreak of foot and mouth disease in Australia livestock could cost tens of millions of dollars. Marc Dalmulder/Flickr, CC BY

An outbreak of an exotic pest or disease, such as foot and mouth disease (FMD) in Australia, which affects cloven hoofed animals such as cattle, pigs and sheep, could close down export markets overnight or make other countries more competitive.

An FMD outbreak in Australia could lead to industry-wide revenue losses for livestock producers of around A$6 billion for a small outbreak and A$50 billion for a large multi-state outbreak over a 10-year period. Additional costs related to disease control, such as labor, decontamination, slaughter, disposal and facilities, would be expected to range from A$60 million to A$373 million.

As an island nation, Australia has been able to maintain an enviable biosecurity status, keeping out many of the world’s worst pests and diseases. This means we have market access for a vast array of export produce, a status which will be increasingly valuable in a growing and highly competitive global market for food.

To ensure we maintain this status, the management of Australia’s biosecurity will require a step change towards smarter and more efficient strategies that are ideally ahead of the pace of change around the world. Smarter technologies, strengthened integration across governments and industry and great commitment will be needed. If we do this, we are surely better able to protect our farmers, communities and environment from the impacts of exotic pests and diseases.

Clearly, we can’t afford to become complacent with our nation’s biosecurity measures. As is true of any threat, it is much better to preempt and avoid than have to deal with the costly consequences.