Ayahuasca literally translates from the Quechua language of the North Andes as “soul vine” or “vine of the dead” and has traditionally been consumed by indigenous communities such as the Aruák, Chocó, Jívaro, Pano, and Tukano across the upper reaches of the Amazon River system in Bolivia, Brazil, Colombia, Ecuador, and Peru.

Ayahuasca is most commonly consumed by indigenous communities in liquid form as part of shamanic rituals designed to communicate with celestial supernatural forces or the spirits of the forest. The psychotropic effects of the drink are caused by three beta-carboline alkaloids: harmine, harmoline and tetrahydroharmine. Owing to their ability to intensify and prolong this psychotropic effect, other natural substances such as tree barks and coca or tobacco leaves can also be combined with the vine.

People outside of indigenous groups may come across ayahuasca through a variety of more or less formal contexts such as new religious movements, enlightenment retreats, neo-shamanic workshops, self-discovery weekends and eco-lodges specializing in spiritual tourism. As with the recent death of Unais Gomes, who was killed while taking part in a shamanic ceremony in the Iquitos region of Peru, most of the fatalities linked with consuming ayahuasca occur in the unregulated and frequently ad hoc rituals of these latter scenarios. Use of ayahuasca began to spread beyond traditional indigenous groups in the latter part of the 19th century due to inter-marriage and contact with non-indigenous people working in the region.

The most common form in which ayahuasca passed from indigenous to non-indigenous use was the combination of the vine Banisteriopsis caapi with the leaves of the shrub Psychotria viridis. The foliage of the P. viridis shrub contains the psychoactive agent N,N-Dimethyltryptamine, or DMT, which intensifies and prolongs the psychotropic effects of ayahuasca consumption. The chemical structure of DMT resembles that of psilocybin, the compound found in psychedelic mushrooms. Beyond the indigenous communities of the Upper Amazon Basin, ayahuasca is most popularly consumed in two kinds of ritual practices. The first is within the Brazilian “ayahuasca religions” of Barquinha, Santo Daime and A União do Vegetal. These religions have many of the formal attributes associated with mainstream traditional religions such as Christianity, Islam and Judaism – for example the inclusion of prayers, songs and ritual disciplines.

Ayahuasca is also consumed within a variety of more or less formal contexts such as new religious movements, enlightenment retreats, neo-shamanic workshops, self-discovery weekends and eco-lodges specializing in spiritual tourism.

The effects of the brew

In its most common form, ayahuasca is a strong smelling brown liquid with a bitter taste. In addition to the age, quality, and type of plants used, the psychoactive potency of ayahuasca differs relative to the environmental conditions in which they are grown, the ratio of their combination and the amount of processing they undergo.

The size of dose and frequency of consumption varies from one ritual context to another. Depending upon individual physiology, ayahuasca begins to make itself felt 20 or 30 minutes after first being consumed, with subsequent doses increasing its psychotropic effects. 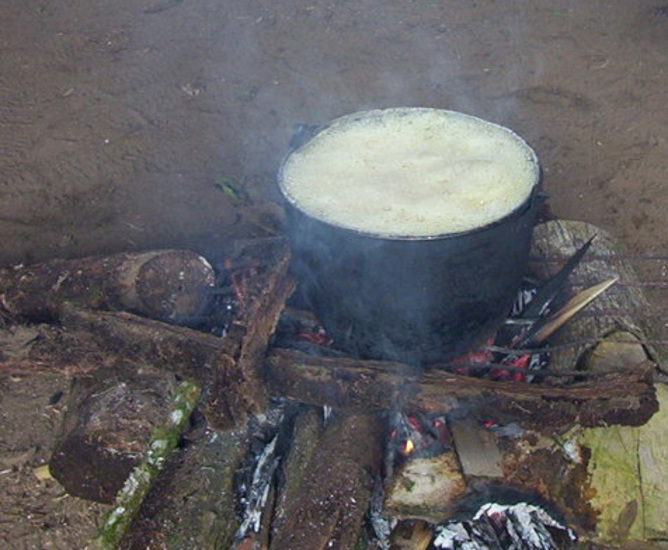 Most renowned for the visual imagery it produces, ayahuasca may also generate auditory and olfactory sensations. The earliest effects of the liquid tend to be a warming of the stomach followed by a spreading feeling of physical relaxation and mental calm. There is, though, no loss of vigour or alertness.

Weaker doses of ayahuasca produce a mild detachment from one’s body and surroundings which allows a mental objectification and critical examination of the smallest of details, feelings and thoughts. Stronger forms of the liquid promote the visual apprehension of irregular shapes, recurring and colourful geometric patterns, distorted and fleeting images, and out-of-body experiences or dream-like visions populated by the familiar and the fanciful.

Sounds may also be heard as distortions of external stimuli or self-contained auditory experiences. Likewise, smell and taste may be affected to a more or less pleasant degree. Given its emetic qualities, ayahuasca consumption often induces vomiting and may also result in the involuntary evacuation of the bowels. While these effects may be moderated by practice and dietary restrictions, their purgative nature is positively construed as an external physical manifestation of inner spiritual cleansing.

DMT is a proscribed substance in various parts of the world; for example it is categorized as a “Class A” drug in the UK and a Schedule I drug under UN conventions. Ayahuasca is frequently subject to many of the same restrictions and sanctions as narcotics such as heroin and cocaine. Nevertheless, the powerful forces of globalisation are spreading ayahuasca consumption beyond its traditional geographical heartlands and this, in turn, is resulting in the legalization or decriminalization of ritual use (but not production) in a growing number of countries (incuding Holland, Italy, Spain, and the United States).

Ayahuasca is a psychoactive substance to be used with care and, like other psychotropics, should not be consumed by individuals with certain physical or psychological conditions.

By Andrew Dawson, Professor of Modern Religion, Lancaster University. This article was originally published on The Conversation. Read the original article.