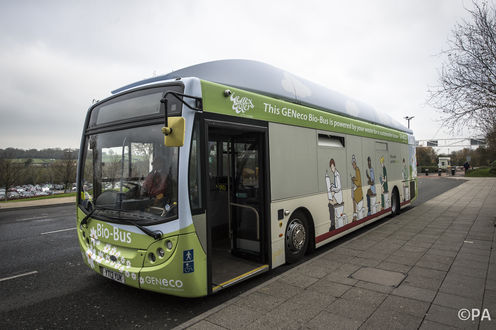 By Sarah Jewitt, University of Nottingham

For those of us who follow these matters – and my academic works include Geographies of Shit: Spatial and temporal variations in attitudes towards human waste – this was an exciting moment, a rare piece of good PR for human waste. After all, most societies strongly associate it with a sense of disgust. Poo threatens the health of around 2.5 billion people … and it smells bad.

Yet it also represents an important resource, used in lots of different ways throughout history. Though the “poo bus” has captured the imagination there are many other uses for human waste.

Urine is particularly versatile. In Medieval Europe, it was widely used to clean clothes while the Romans used it for tanning leather and cleaning wool.

It also makes an excellent agricultural fertilizer. Before the 19th century realization that human waste was a health risk, sewage was routinely transported from British towns to villages for use as manure.

However, most of the health risks can be eliminated if urine (harmless if unpleasant) and feces (full of diseases) are separated at source through some form of urine diversion toilet. Such strategies make sound environmental and economic sense given the urine produced annually by each adult contains enough plant nutrients to grow 250kg of grain, enough to feed them for a year.

China has a long history of using such toilets to collect urine for use as a fertiliser. In some regions of Sweden these toilets are now mandatory, improving environmental quality as well as creating significant savings on fertilizer costs for farmers.

Although harvesting biogas from human waste is not a new concept (Assyrians were using it to warm their bath water back in the 10th century BC), the potential to simultaneously manage waste and generate power has attracted increasing attention in recent decades. What to do with all this sludge? SusAnA, CC BY

Modern waste treatment leaves behind sewage sludge that has traditionally been difficult to dispose of. However when the sludge is fed into a large vat, essentially like a stomach, and left to digest (an anaerobic digestion plant) it can produce valuable biogas and nutrient-rich digestate.

Biogas can be used directly as a fuel, cleaned up to create bio-methane or fed through a combined heat and power unit to generate electricity. The digestate can be used as a fertilizer or soil conditioner, helping in the process to reduce methane emissions, enhance plant growth and sequester carbon through photosynthesis.

Sweden and Germany are particularly big anaerobic digestion users. In Germany, sewage plants can sell their excess energy back to the national grid. Attractive tariffs designed to promote renewable energy have even meant many plants have started to “feed” their anaerobic digestion units with purpose-grown energy.

Though the UK’s biogas industry lags behind that of countries like Sweden and Germany, some sewage works are already releasing biogas into the national grid. With each adult producing around 30kg of dried sewage each year, there is lots of growth potential.

If all of the UK’s sewage plants adopted this technology, around 350,000 homes could be supplied with gas derived from human waste.

The environmental benefits of poo-powered travel are clear: bio-methane produces 95% less CO2 and 80% less nitrous oxide than diesel as well as having no particulate emissions.

In the UK, there is enough bio-methane to fuel half the country’s large trucks.

Four years ago engineers developed a VW Beetle fuelled by bio-methane gas generated at the Avonmouth sewage plant near Bristol. This same sewage plant is now powering the “poo bus” and it could do even more. Avonmouth produces around 17m cubic meters of bio-methane each year which, if exported to the grid, could meet the gas needs of 8,300 homes.

But Sweden, again, is a leader here. Their transport policy has prioritized the development of bio-methane for trucks and buses; an initiative that has helped to clean up the air and meet renewable energy targets.

At a smaller and more experimental scale, meanwhile, researchers at the Bristol Robotics Laboratory have succeeded in charging a mobile phone using electricity generated from urine. Using a microbial fuel stack, they have succeeded in taking advantage of the metabolism of live micro-organisms to create electricity from convert organic matter – in this case urine.

If such technologies can be made to work on a bigger scale, the future for renewable power looks not only bright … but yellow.

Sarah Jewitt, Associate Professor of Geography at University of Nottingham, does not work for, consult to, own shares in or receive funding from any company or organization that would benefit from this article, and has no relevant affiliations.