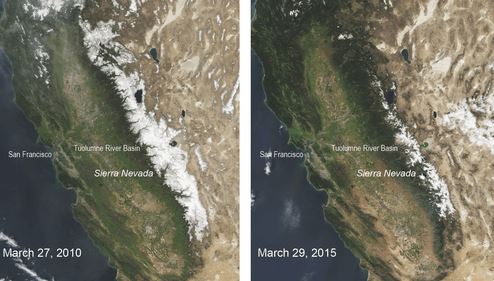 In the Mediterranean climate of California, with its warm, wet winters and hot, dry summers, the snowpack in the Sierra Nevada mountains plays a critical role. It serves as a natural water storage system that feeds waterways and reservoirs during the dry summer months.

That’s why it was very fitting that when Governor Jerry Brown announced the first-ever mandatory statewide water restrictions, he did it from the snow-barren Phillips snow course station in the Sierra Nevada. The April 1 snowpack’s water content has been measured at this station since 1941 and has averaged at 66.5 inches over this period. On April 1 2015, there was no snow on the ground.

The Phillips station underscores how extreme the 2015 snowpack situation is. In our study, we put the 2015 snowpack low in a long-term context and demonstrated that these were the driest conditions in 500 years.

Our research, based on tree-ring data, also suggests that in the future California officials need to alter plans for managing and storing water from the snowpack, which has historically supplied about 30% of the state’s water.

Our team has been working for a couple of years on reconstructing the atmospheric circulation patterns that drive hydroclimate variability over the American Pacific Coast. When the 2015 snowpack levels for the Sierra Nevada were found to be 5% of their historical average on April 1 – the date when snowpack is normally at its peak – we realized that we could provide a century-scale context for these numbers.

As a proxy for winter precipitation over the Sierra Nevada, we used a tree-ring compilation of more than 1,500 blue oak trees in central California. The California blue oaks are some of the most moisture-sensitive trees to be found anywhere on the planet. Their tree-ring width reliably tracks the amount of winter rainfall that central California receives and the storm tracks that bring that rainfall from the Pacific Ocean. These same storm tracks, as they move farther east, then deliver winter precipitation in the form of snow over the Sierra Nevada.

For winter temperature, we used a tree-ring-based winter (February-March) temperature reconstruction developed for and averaged over two gridpoints in central and southern California. Temperature is an important factor in year-to-year snowpack variability because it determines how much of the precipitation falls as rain versus snow and affects the speed of snowmelt. Tree-ring records for blue oak (Quercus douglasii), which is sensitive to winter precipitation, were used to reconstruct the Sierra Nevada snowpack over the last 500 years. miguelvieira/flickr, CC BY

We combined the winter precipitation and the winter temperature data sets in a model that captures how much these factors contribute to snow water equivalent (SWE) values for the April 1 Sierra Nevada-wide measurement. SWE is a widely used measure of snowpack that reflects its water content. We compiled April 1 SWE data from 108 snow course stations throughout the Sierra Nevada that started measurements in 1930 or earlier. We were surprised by how similar the SWE measurements from these 108 stations were and used this common SWE signal to calibrate our tree-ring based multiple linear regression model.

Using tree-ring data, researchers were able to reconstruct precipitation and temperature patterns of the past, showing how this year’s Sierra Nevada snowpack is the lowest in 500 years. The line shows varying levels of snowpack water content. Soumaya Belmecheri, Author provided

Our model allowed us to reconstruct Sierra Nevada April 1 SWE back to the year 1500 CE, and we found that the 2015 April 1 SWE value was the lowest on record over this time span. We further used these 500+ years of data to estimate return periods for snowpack – that is, the likelihood of a 2015 snowpack low as this year to occur. Our results indicate that the expected return period for a 2015-level snow drought is longer than 3,000 years. This estimate has a number of uncertainties, but we can say with 95% confidence that the 2015 SWE return period is longer than the 500-year time span of our reconstruction.

It is important to note that this 500-year return period estimate is based on the past five centuries and cannot be extrapolated into the future. On the contrary, it is likely that the frequency of occurrence of a 2015-level snow drought will increase with anthropogenic climate change. On May 1 of last year, the Phillips, California snow station had no snow in a location that has averaged 40 inches. REUTERS/Max Whittaker

In this context, we found an interesting difference between low (< ~2,130 meters or 7,000 feet) and high elevations (>~2,670 m or 8,750 ft). At low elevations, where winter temperature has strong control over SWE, the 2015 snow drought is strongly exceptional, with an estimated return period of longer than 1,000 years.

At high elevations, however, winter precipitation is the primary driver of snowpack, and the 2015 SWE value exceeds the 95% confidence level for only a 95-year return period. Knowing that the northern Sierras are typically of lower elevation than the southern Sierras, this finding has important implications for water management strategies and deserves further detailed study.

Planning for the future

As we are writing this piece, the Butte fire and Rough fire are raging through the Sierra Nevada, demonstrating in a devastating manner the link between low snowpack, earlier spring snowmelt and increased wildfire risk.

The impact of the 2015 snowpack low on Sierra Nevada ecosystems presents an ominous sign of the severity of the drought conditions that California has been experiencing since 2012.

The impacts of this drought have included water cuts for urban and agriculture consumers, drying wells for local communities and low hydroelectric power generation. Statewide water restrictions have helped to reduce these impacts, but have also revealed California’s vulnerability and lack of preparedness to coping with these societal impacts.

With the Sierra Nevada snowpack historically supplying roughly 30% of California’s overall water, the 2015 snow drought helps explain the state’s drought state of emergency because of the decimating water reservoir levels.

The unprecedented nature of the 2015 snow drought provides some foreshadowing for the future as well: with projected anthropogenic warming, the Sierra Nevada snowpack will be a less reliable source of water for reservoirs and suggests that adequate planning for water management and capturing is needed to build a resilient system for dire situations such as the current one.