While definitions vary, to “cancel” in today’s lingo means to remove people and cultural products from consumption and popular conversation. This is done in light of actions that make them unworthy of praise or critique.

Notable cancellations include R. Kelly over allegations of sexual abuse, Gwen Stefani for apparent cultural appropriation in the 1990s and early 2000s, Roseanne Barr for a racist tweet, and Kanye West for being a Trump supporter. There are a myriad of things that can lead to an individual, and by proxy their work, being canceled.

At present, there exists a lack of critical examination of how we treat art and culture by people who have been canceled. We tend to understand culture from the view of “Great Man theory”, which argues that the genius and ingenuity of one person (typically a man) was responsible for the creation of a thing. It is largely mocked now as we better understand the nature of the village around a creator and marginalized individuals receive acknowledgement posthumously.

It also relies on the neglect of what should be a natural fit for progressive politics – an embrace of the “death of the author”. Asserted first by Roland Barthes in 1967, it became iconic in literary theory and later film and cultural analysis. It argues that, culturally, we live in a time in which it is the audience, not the author, who has ultimate control over the interpretation of arts and culture.

Not the work of one

There is a lot of recent writing reflecting on the role women (particularly wives and partners), people of colour and low-paid assistants played in the making of artistic, scientific and cultural works. This has been seen in the case of the discovery of DNA, contributions to chemistry and the invention of the light bulb.

As such, the traditional great man theory, which centers on the driving creative genius of individual – usually white – men, has been challenged. As a result, it has transformed our understanding of how knowledge and art are produced.

Even iconic works of art that lean into the great man trope have subsequently been found to be based on faulty assumptions. Michelangelo, for example, who was more familiar with sculpture than painting, on receiving the commission of the Sistine Chapel, recruited a number of assistants who worked directly on the ceiling fresco.

In film and television there is a complicated division of labour among all the players, in front of and behind the camera, who have a vital role in getting something produced. To identify and apportion acclaim or blame to one person, however terrible they are as individuals, simultaneously penalises everyone else involved in the production process. 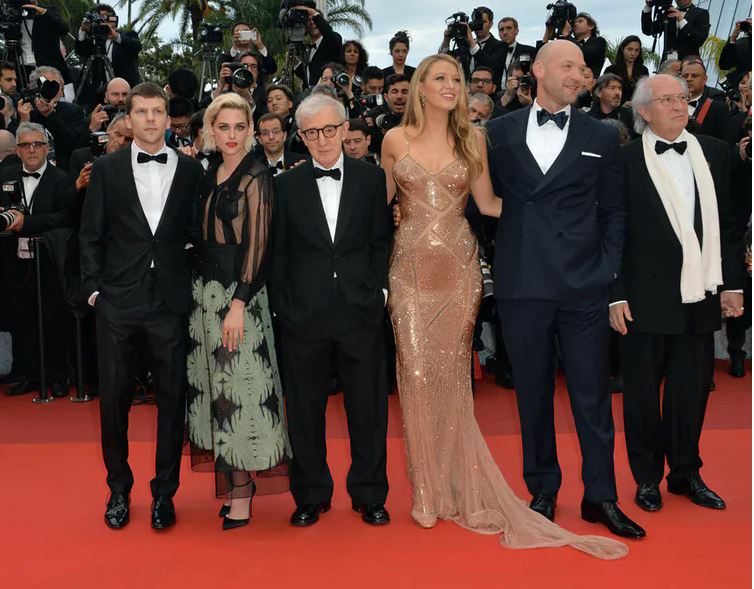 Woody Allen and cast at the premiere of his first Amazon film, Café Society, in Cannes. Featureflash Photo Agency/Shutterstock

This was seen in the case of Roseanne Barr whose tweet led to the rest of the cast and crew losing their jobs as Roseanne was taken off air. This is an example of how great man theory, in a contemporary context, can be extended to women who are now in positions of power where their social infractions can lead to the punishment of the other producers of their work.

This approach perpetuates the individualistic (rather than social), mostly male genius-driven model of history and innovation. Ironically, this is the case even when we evaluate culture from a place of critique and warranted derision. As such, perhaps it might be worth considering whether or not to consume a piece of culture with which a canceled individual has been involved, with this perspective in mind.

The audience is in control

Also worth considering is the “death of the author” theory. This perspective has been made famous by the rise of postmodernism – defined briefly as a reaction against modernity’s trust in hard and fast truths and faith in progress, as well as an artistic push to rebel against cultural conventions.

Essentially, what Barthes argues is that cultural works do not have a singular, secret meaning that we must look for. Rather, it is a revolutionary act to use our own power of interpretation to read things differently. The application of this idea has produced illuminating and transgressive readings of culture and art. This includes feminist readings of films that are misogynistic when viewed superficially, but which can also be read as exposing the fragility of dominant masculinity when examined using a feminist lens.

A good example of this can be found in an essay by the writer Zaron Burnett III in which he makes a persuasive case for reading Disney’s The Little Mermaid as a feminist text. For instance, in the song Part of Your World, in which Ariel articulates her desire to challenge social norms and gain agency.

How we might harness this in the context of work marred by canceled individuals ranges from ignoring their involvement entirely to embracing personal interpretations based on our individual life experiences.

Yet the way in which cancel culture handles such works seems to have swung violently in the opposite direction, resulting in the death of the audience and, in particular, of audience agency. People are not afforded the space to form such personal readings. Instead, a singular narrative prevails that gives no room for any other action than to cancel. Some examples include ongoing arguments in favor of canceling the art of Paul Gauguin, refusing to watch or screen films involving Roman Polanski, and the network cancellations of Cosby Show reruns.

Taken together, the “great man” and “death of the author” frameworks should, at the very least, provide further food for thought. While it is inevitably up to the consumer of culture to decide where they stand and what they feel comfortable consuming, it is worthwhile to consider unorthodox perspectives. Ultimately, isn’t that precisely what great art should challenge you to do?

By Tina Sikka, Lecturer in Media and Cultural Studies, Newcastle University. This article is republished from The Conversation under a Creative Commons license. Read the original article.