Cartoonists Defiant In Response To Terrorist Attack On Charlie Hebdo
By The Conversation | January 8th 2015 09:14 AM | Print | E-mail 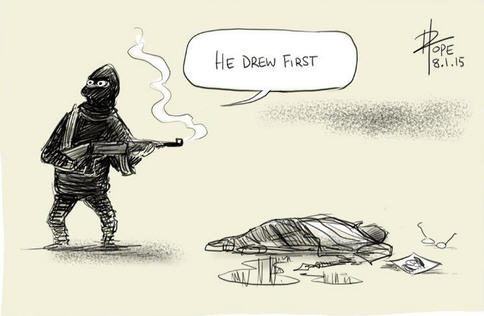 Cartoonists and satirists in “the West” are confronted with the risks of their expressive freedom today as a consequence of the assassinations at Charlie Hebdo in Paris.

This is how illiberal authoritarians respond to satire – not with laughter, shamelessness or low-grade malice, but with violence. It can be an easy life as a cartoonist in places with freeish presses. As long as you are funny, you get to criticize the powerful with something close to impunity.

In Iran, or North Korea, or Myanmar it is really dangerous to ply this trade. In Sydney, or Chicago, or Paris it’s not supposed to be like that. We just know that satirists with a license to mock are part of the freedom we enjoy, that they provide a check against the omnipresent desire of power to blind us with bulldust.

Suddenly, for cartoonists around the free-ish world, it is not like that, and you can see it in the shock registered in cartoons that are being tweeted around the world in recent hours.

So the instant response of cartoonists is to stand firm against the threat and announce solidarity. This is happening more consistently, I think, than it did last time we had a big cartoon controversy. The Danish cartoons of Muhammed, even though they were republished in Charlie, were clearly a right-wing provocation of Islam, aligned to xenophobic politics.

As a lot of cartoonists since the 1960s come broadly from the left, they were not so vigorous in their defense of images they often found simply offensive and mostly amateurish.

The Charlie Hebdo case is different. First because people have actually been gunned down rather than anathematized. Second because the French magazine is almost canonical as a bastion of post-60s left-wing anti-establishment dissent.

Many more cartoonists have woken today to feel viscerally that four of their own have been murdered for fulfilling their vocation as questioners of authority.

It’s hard to tell what might follow from this. We’ll need to keep an eye on whether the terrorists win over the months and years to come by causing restraint among cartoonists on the topic of Islam.

Tomorrow there will be even more brave expressions of solidarity in newspapers, magazines and online. But will editors and cartoonists decide to pick different fights in 18 months? It will be hard to tell definitively, but those of us who think satire an essential part of freedom of expression should keep a watching brief.

Another, more positive consequence might be the development of a coalition between left and right on questions of free speech and satiric license. Perhaps they can agree more clearly on condemning the authoritarian and oppressive forms of ideology, which at present include a thread of Islam.

I want to take the religion out of this and treat it as a matter of a clash of political cultures. Not because religion doesn’t matter, but this is clearly a case of religion in its political aspect. Religious values are therefore like other values (egalitarianism, tolerance, freedom to offend) that need to be brokered in political space.

Cartoons clarify this because they pack so much information, thought and provocation into such a small space. So this is an interesting challenge to the functional impunity assumed by cartoonists in Australia and elsewhere. In a way it’s invigorating – it demonstrates that what they do really matters. But it is a fearful thing too.

Robert Phiddian, Deputy Dean, School of Humanities at Flinders University, does not work for, consult to, own shares in or receive funding from any company or organisation that would benefit from this article, and has no relevant affiliations.