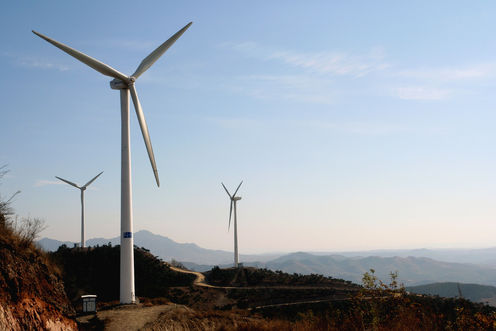 By John Mathews and Hao Tan, University of Newcastle

In an article published today in Nature, we argue that China shows us just such a way. By boosting markets in water, wind and solar power, China is driving down costs and accelerating the uptake of renewable energy.

We argue that this is “contributing more than any other country to a climate-change solution”, and could be viable alternative to international climate agreements such as the Kyoto Protocol, which has been so ineffective in cleaning up the world’s still carbon-heavy energy supplies.

But China’s large investments in renewables are best understood as enhancing the country’s energy security and not solely as a means of reducing carbon emissions.

This goes against the grain of most commentary on China, which sees the country as fully committed to a black, coal-fired energy future

But there is another, green side to China’s energy story – as argued on The Conversation by Ross Garnaut.

As the scale of Chinese manufacturing has grown — in our article we note that production of solar cells has expanded about 100-fold since 2005 — the costs of renewable-energy devices have plummeted. Countries such as Germany and South Korea, like China, are boosting their national renewable-energy industries and markets.

But others, including the United States, seem yet to notice this shift and are pursuing ineffective energy policies, including considering alternative fossil-fuels sources like coal-seam gas and putting trade tariffs on Chinese-made solar panels. Indeed oil addiction in the US appears to be worse than ever.

There are clear implications for Australia too. The current wave of anti-renewables rhetoric and negative reaction by the Australian government is out of step with the rest of world, and in particular with China and India, (and Germany) all of which countries see renewables as an important and growing element of their energy mix.

Today’s discussions about energy security are focused almost exclusively on access to fossil fuels. “Energy security” really means, from this perspective, “oil security” or “gas security”. Keeping the lights burning is, of course, a primary goal— but the means for achieving it are considered from a very narrow perspective.

If the perspective is broadened, to include renewables, then many new vistas open up. Renewables are the products of manufacturing, which any country can practice. And the more that countries manufacture renewables, and expand the market for renewables devices like solar cells and wind turbines, the more their cost comes down, through the operation of the learning curve (which displays the reduction in costs as scale of production expands). In the case of solar PV cells, costs have fallen by 80% in just the last five years, as the global market has expanded.

To see energy security in terms of manufacturing capacities of course plays to China’s strengths. While the rest of the world has been fixated on China’s build-up of black, fossil-fuelled energy systems, the country has been quietly building a mammoth green energy system, based on water, wind and solar power. China’s renewable power capacity now exceeds that of every other country. By 2013 China had 378 gigawatts of electric power generating capacity based on renewable sources, primarily water, wind and solar sources. The US is a distant second, with its renewable energy sources reaching a capacity of 172 gigawatts; while Germany reached 84 gigawatts in 2013, and India, rapidly expanding, reached 71 gigawatts. But it is the rate of expansion that is so remarkable. China is rapidly expanding its renewable energy industries and its use of renewable devices to generate electric power.

Its latest target is that renewables will have a capacity of 550 gigawatts — over half a trillion watts — by the year 2017. We calculate that this will exert a major impact in China — enhancing energy security; reducing emissions pollution; and reducing carbon emissions.

But the primary impact will be on energy security. China became a net importer of oil in 1993; of natural gas in 2007; and of coal in 2011. If it can reach its 2017 target of 550 GW renewables, we calculate that this would translate into a saving of 45% on current imports of coal, oil and natural gas.

China is leading the way to a world of decarbonized energy, by placing the emphasis of its policy on growing the markets for renewables and building the industries to supply wind turbines, solar cells, batteries and other devices.

In this way it is driving down costs, through the learning curve, and making renewables more accessible to all countries. This is good for China, and for the world.

John Mathews is Professor of Strategic Management, Macquarie Graduate School of Management at Macquarie University. Hao Tan is Senior Lecturer in International Business at University of Newcastle. The authors do not work for, consult to, own shares in or receive funding from any company or organization that would benefit from this article. They also have no relevant affiliations.