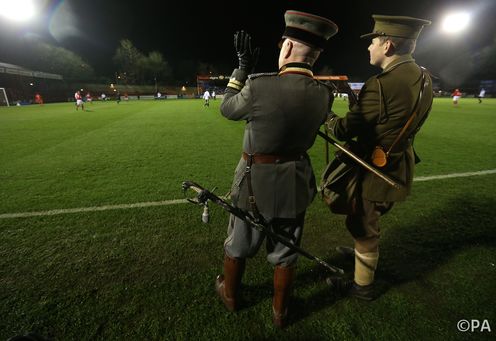 World War One Christmas Truce Commemoration match – but it's debated whether the original ever happened. Mike Egerton/PA Wire

The Christmas Truce is no stranger to popular entertainment – this year more than any other as its 100th anniversary is marked. The famous moment when British and German soldiers climbed out of the trenches in peace on Christmas Day 1914 has been replicated and ruminated upon in history books, film, and propaganda – and now advertising. In the UK, the supermarket Sainsbury’s 2014 Christmas advert dramatizes the event, prompting cries of outrage that it has trivialized it.

But what really happened 100 years ago?

On Christmas Eve, 1914, the conflict that was soon to be called “The Great War” had dragged on inconclusively for almost five months. Most of the powers on the western front had assured their populations that the war that began on July 28 would bring a quick victory by Christmas. German soldiers confidently marched to the train stations that would transport them westward shouting “Nach Paris!” (“To Paris!”), while French troops heading in the opposite direction cried “À Berlin” (“To Berlin!”).

It quickly became evident that these war plans were doomed as under the deadly firepower of the machine gun and heavy artillery the powers were forced to dig themselves into a long line of parallel trenches stretching from the North Sea to Switzerland.

Throughout the autumn and early winter of 1914, periodic efforts to break the stalemate failed.

In the meantime, the belligerent governments unleashed a powerful propaganda campaign designed to strengthen the morale of the soldiers at the front by assuring them that their efforts were essential to the preservation of civilivation. The main feature of those propaganda campaigns, captured in hundreds of posters printed and circulated widely, was the depiction of the other side as the quintessence of evil.

In Britain the epithet “Hun” was resurrected as a label for the German army that had invaded neutral Belgium on its way to France, violating the rules of war by executing innocent civilians in retaliation for the death of German soldiers at the hands of freelance Belgian snipers.

German propaganda depicted the British as despicable traitors to the “Anglo-Saxon race” by intervening in the war on the side of France.

But this attempt to demonize the inhabitants of the opposite trenches as subhuman beasts was suddenly contradicted when a large number of German and British soldiers spontaneously launched was has come to be known as “The Christmas Truce”.

On Christmas Eve both sides erected Christmas trees on the parapets of their trenches and began to sing Christmas carols. On Christmas Day soldiers from both sides climbed out of the trenches and advanced into No Man’s Land, where they exchanged treats and holiday good wishes and arranged for the burial of dead comrades caught between the two lines.

Contrary to the version put forward by Sainsbury’s, it was actually German soldiers that made the first move, with the British soon following. And historians dispute whether there was in fact a football match. This informal cease-fire formed part of a widespread practice known by the slogan “live and let live” whereby soldiers refrained from launching aggressive operations toward the opposite trench during mealtime or teatime. But the Christmas Truce represented something much more fundamental than reciprocal consideration for the lives of others — fraternization with the enemy.

“Such a thing should not happen in wartime” complained Corporal Adolf Hitler on hearing of the incident. “Have you no German sense of honor left at all?” And French platoon commander Charles de Gaulle also denounced the few incidents of fraternization with the enemy as “lamentable”.

The century since the Christmas Truce has seen a long succession of attempts to use the event as a way of making a statement about war. A scene depicting the truce appeared in the 1969 British film Oh! What a Lovely War. The event formed the centerpiece of the 2005 French film Joyeux Noel. Two scholarly books devoted to the subject, Malcolm Brown and Shirley Seaton’s Christmas Truce and Stanley Weintraub’s Silent Night, have delved into the available primary sources in a careful bid to separate fact from fiction.

In the run-up to the centenary of the event, the Christmas Truce became an object of considerable public attention in Britain and the United States. The Martin Luther King Peace Committee at Northumbria and Newcastle Universities assembled a collection of material about the Christmas Truce to enable schoolteachers to provide their pupils with an alternative to what the pacifist organization sees as the British government’s campaign to glorify World War I in its centenary years.

And then Sainsbury’s revealed their Christmas advert, which has since gone viral. Yes, it got some of the facts wrong, but the most important thing to remember is that the advert ends before the sequel to the real Christmas Truce: the resumption of the human slaughter that took the lives of some nine million soldiers before the war was over, a month before Christmas, 1918.

William Keylor, Professor of History and International Relations at Boston University, does not work for, consult to, own shares in or receive funding from any company or organization that would benefit from this article, and has no relevant affiliations.