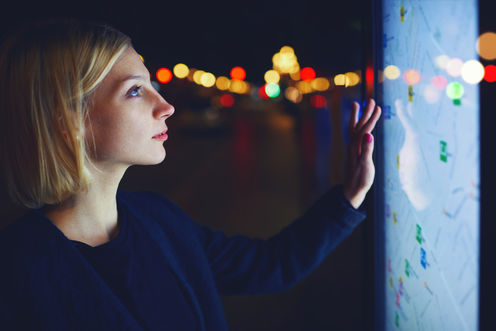 Behind the success of the new wave of location based mobile apps taking hold around the world is digital mapping.

Location data is core to popular ride-sharing services such as Uber and Lyft, but also to companies such as Amazon or Domino’s Pizza, which are testing drones for faster deliveries.

Last year, German delivery firm DHL launched its first “parcelcopter” to send medication to the island of Juist in the Northern Sea. In the humanitarian domain, drones are also being tested for disaster relief operations.

Better maps can help app-led companies gain a competitive edge, but it’s hard to produce them at a global scale. A few select players have engaged in a fierce mapping competition. Google leads the race so far, but others are trying to catch up fast.

Apple has enlarged its mapping team and renewed its licensing agreement with TomTom. TomTom has plans to 3D map European and North American freeways by next year. DHL’s prototype ‘parcelcopter’ is a modified microdrone that costs US$54,900 and can carry packages up to 1.2kg. Wolfgang Rattay/Reuters

In Europe, German carmakers Audi, BMW and Mercedes agreed to buy Here, Nokia’s mapping business. The company had been coveted by Uber, which has gained mapping skills by acquiring deCarta and part of Microsoft Bing.

Further signs of the fever for maps are startups such as Mapbox, Mapsense, CartoDB, Mapillary, or Mapzen. The new mapping services are cloud-based, mobile-friendly and, in most cases, community-driven.

A flagship base map for the past ten years has been OpenStreetMap (OSM), also known as the “Wikipedia of mapping”. With more than two million registered users, OpenStreetMap aims to create a free map of the world. OSM volunteers have been particularly active in mapping disaster-affected areas such as Haiti, the Philippines or Nepal. A recent study reports how humanitarian response has been a driver of OSM’s evolution, “in part because open data and participatory ideals align with humanitarian work, but also because disasters are catalysts for organizational innovation”.

A map for the commons?

While global coverage remains uneven, companies such as Foursquare, Flickr, or Apple, among others, rely on OSM free data. The commercial uses of OSM primary data, though, do not come without ongoing debate among the community about license-related issues. The steering wheel is seen resting in the middle of the dashboard inside a Rinspeed Budii self-driving electric city car in Geneva. Ard Wiegmann/Reuters

Intense competition for digital maps also flags the start of the self-driving car race. Google is already testing its prototypes outside Silicon Valley and Apple has been rumoured to work on a secret car project code named Titan.

Uber has partnered with Carnegie Mellon and Arizona Universities to work on vehicle safety and cheaper laser mapping systems. Tesla is also planning to make its electric cars self-driving.

Are we humans ready for this brave new world? Research suggests young people in North America, Australia and much of Europe are increasingly becoming less likely to hold a driver’s license (or, if they do, to drive less).

But even if a new generation of consumers were ready to jump in, challenges remain huge. Navigation systems will need to flawlessly process, in real time, position data streams of buildings, road signs, traffic lights, lane markings, or potholes. And all this seamlessly combined with ongoing sensing of traffic, pedestrians and cyclists, road works, or weather conditions. Smart mapping at its best.

Legal and ethical challenges are not to be underestimated either. Most countries impose strict limits on testing self-driving cars on public roads. Similar limitations apply to the use of civilian drones. And the ethics of fully autonomous cars is still in its infancy.

Autonomous cars probably won’t be caught texting, but they will still be confronted with tough decisions when trying to avoid potential accidents. Current research engages engineers and philosophers to work on how to assist cars when making split-second decisions that can raise ethical dilemmas.

But the future of digital maps is not just on the go. Location-based service revenues are forecast to grow to €34.8 billion in 2020. The position data deluge of the upcoming geomobile revolution gives maps a new frontier: big data analytics. As Mapsense CEO Erez Cohen notes:

“the industry is much larger than the traditional GIS industry. It’s actually growing at a massive rate, and there are a massive number of new companies that need the services of mapping analytics because they’re generating all this location data.”

Digital mapping technology promises to unveil our routines, preferences, and consumer behavior in an unprecedented scale. Staggering amounts of location data will populate our digital traces and identities. The impact on our lives, organizations, and businesses is yet to be fully understood, but one thing is sure: the geomobile revolution will be mapped.