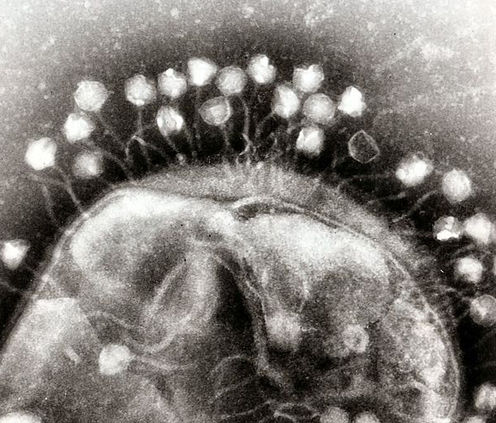 Bacteria under attack by a flock of bacteriophages. Credit: Graham Beards/Wikimedia Commons

Bacterial infections remain a major threat to human and animal health. Worse still, the catalogue of useful antibiotics is shrinking as pathogens build up resistance to these drugs. There are few promising new drugs in the pipeline, but they may not prove to be enough. Multi-resistant organisms – also called “superbugs” – are on the rise and many predict a gloomy future if nothing is done to fight back.

The answer, some believe, may lie in using engineered bacteriophages – a type of viruses that infects bacteria. Two recent studies, both published in the journal Nature Biotechnology, show a promising alternative to small-molecule drugs that are the mainstay of antibiotics today.

From basic to synthetic biology

Every living organism has evolved simple mechanisms to protect itself from harmful pathogens. This innate immune system can be a passive barrier, blocking anything above a certain size, or an active response that recognises foreign molecules – such as proteins and DNA – then kills them.

In bacteria, an important component of the immune system is composed of a family of proteins, which is tased specifically with breaking down foreign DNA. Each bug produces a set of these proteins that chew the genetic material of viruses and other micro-organism into pieces while leaving its own genome intact.

In vertebrates, a more advanced mechanism – called the adaptive immune system – creates a molecular memory of previous attacks and prepares the organism for the next wave of infection. This is the principle on which vaccines are built. Upon introduction of harmless pathogen fragments, the adaptive immunity will train specialist killer cells that later allow a faster and more specific response upon contact with the virulent agent.

Until recently, people thought bacteria were too simple to possess any sort of adaptive immunity. But in 2007 a group of scientists from the dairy industry showed that bacteria commonly used for the production of cheese and yogurts could be “vaccinated” by exposure to a virus. Two years earlier, others had noticed similarities between repetitive sections in bacterial genomes and the DNA of viruses. These repetitive sequences – called CRISPR for “clustered regularly interspaced short palindromic repeats” – had been known for 20 years but no one could ever explain their function.

With both these observations it quickly became clear that bacteria were introducing viral DNA fragments into their own genome to protect themselves from later attacks. But it took another five years to get the whole picture.

In 2012, a German team identified all the pieces and showed how exactly bacteria transcribe viral DNA into a short RNA – usually the messenger molecule – which guides the DNA-cutting protein called Cas9 and tells it where to chop off viral DNA.

This could have been just one more interesting scientific observation, but in an era of synthetic biology, natural functions can quickly become designers tools. Within two years, many laboratories demonstrated that, by tailoring the short RNA guide, any gene could be cut out from a chromosome using the CRISPR-Cas9 system.

Since that breakthrough, hundreds of scientists have used it to manipulate the genome of bacteria, yeast, worms, crops, fruit flies, zebrafish, mice, rats, or even human cells. Although there are limitations, a procedure that used to take months using previous technologies – such as breeding or genome editing – can now be done in a few weeks.

Now two teams of scientists, one led by Timothy Lu of the Massachusetts Institute of Technology and the other by Luciano Marriffini of Rockefeller University, each used the CRISPR-Cas9 system to generate their own version of a prototype technology that turns a bacteria’s defense mechanism into a self-destructing weapon. The main idea behind their work was to use genetic engineering to rewire the bacteria’s immunity to produce “boomerang” antibiotic targets only bugs carrying specific genes.

To do this, their teams built an artificial CRISPR-Cas9 system – that could cut out specific genes – by assembling pieces in the lab before reintroducing it back into bacteria using viruses. Once injected into the bug, the guide RNA recruits the Cas9 protein to target genes that endow the bug antibiotic resistance or other harmful properties by embedding viral DNA. After those genes are removed, the superbug either dies or turns into an harmless one.

Although the method still needs improving to become useful for treatment, its ability to specifically kill pathogens has significant potential because it can limit their spread to other bacteria.

Fighting antibiotic resistance would not be the only application for these engineered viruses. Current small-molecule antibiotics also end up killing other healthy bacteria in our body. The new method would the harmless bugs intact, and thus minimize side-effects of antibiotics use.

In the past few years, the role of friendly microbes living in the human gut has become clearer. Imbalance in the diversity of species and their relative abundance may influence the development of certain conditions – including depression, diabetes and obesity. In this context, engineered viruses that would restore or shape the microbiota (or flora) could greatly improve health.