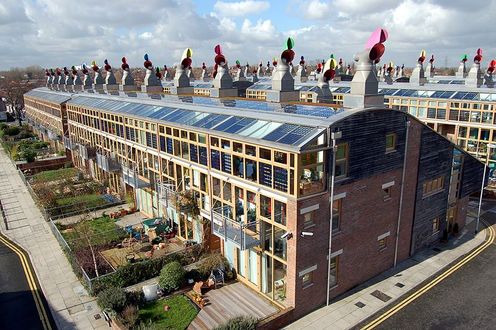 The primary goal of home energy efficiency initiatives might be to reduce total energy consumption, but these projects could have a negative impact on public health if we do not take care.

Global climate change has been called the biggest global public health threat of the 21st century – and energy efficiency is a key tool in our efforts to reduce greenhouse gas emission levels.

Efficiency projects allow us to more effectively manage energy consumption growth without sacrificing services that we value. In the cost-optimized 2°C scenario set out by the International Energy Agency (the temperature rise that we have to stick within if we’re to mitigate climate change), end-use efficiency improvements are responsible for 38% of the global emissions reductions between now and 2050.

Without these emissions decreases, the World Health Organisation expects 250,000 additional deaths to occur each year, caused by climate-related malnutrition, malaria, diarrhea and heat stress around the globe.

Given these numbers, it seems logical to push forward with blanketing energy efficiency investments. However, there is evidence to show that we must take care in how we implement projects.

In a 2014 article published in the British Medical Journal, James Milner and his co-authors outlined how some home energy efficiency improvements could cost lives by increasing indoor radon exposure and the resultant risk of developing lung cancer.

According to the authors, energy efficiency projects could lead to an estimated 56.6% increase in average indoor radon concentrations. They calculate that the corresponding increase in radon exposure could lead to 278 premature deaths (the equivalent of 4,700 life years lost) each year in the UK.

After smoking, radon exposure is the most important risk factor in developing lung cancer. This colorless gas, which occurs naturally from the indirect decay product of uranium or thorium, can be found in indoor air. It produces a radioactive dust that is trapped in our airways. This radiation then causes lung damage and increases the chance that we will develop lung cancer. Each year, an estimated 1,400 cases of lung cancer in the UK are primarily due to radon exposure, and about 21,000 in the US.

The increased radon concentrations in the Milner study stem from the fact that many energy efficiency improvements alter the way that buildings exchange indoor and outdoor air. These alterations are often aimed at reducing energy losses due to leaky windows or drafts around unsealed doors. In turn, these buildings can be more effectively heated and cooled, leading to observable public health improvements and decreases in total energy use.

However, they can increase some health risks. According to Milner and co-authors, while an individual project can be “good for energy efficiency, indoor temperatures in winter and protection against outdoor pollutants, it has the potential to increase concentrations of pollutants arising from sources inside or underneath the home.”

A 2013 study suggested similar risks in retrofitted buildings from mould growth and “sick building syndrome”, where occupants appear to experience health issues from occupancy in a building. By trapping humidity inside the building, energy efficiency retrofits could unintentionally lead to dangerous mold growth. In turn, people in these buildings would be more prone to chronic fatigue, irritated lungs, and watery eyes.

Using fans and other equipment to carefully control the indoor air quality could reduce or eliminate the negative co-impacts documented in these studies. Of course, the use of these technologies would offset some of the energy savings. But, they could also prevent an array of illnesses, which could stymie future energy efficiency proposals.

Energy efficiency projects can help to reduce total energy consumption. They are a key part of mitigating the impacts of global climate change. But we must be aware of any potential negative co-impacts on human health and take care to reduce their effect.

Melissa C. Lott is a PhD Student: energy, environmental and public health trade-offs of energy system technology transitions, focusing on air pollution at University College London. One of the co-authors of the BMJ study mentioned in the article is Melissa Lott's secondary PhD supervisor.