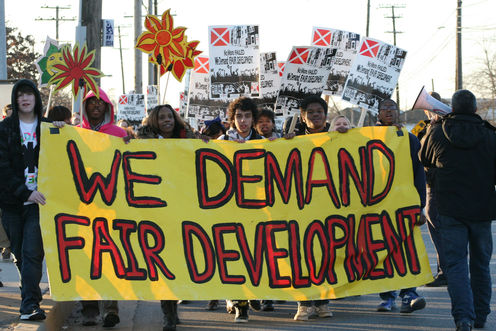 As we celebrate Earth Day this week, it is an opportune time to recognize that not all Americans have equally enjoyed the dividends of our nation’s environmental protections.

Decades of research clearly demonstrate that poor and minority communities often experience more environmental burdens and enjoy fewer environmental amenities. These communities tend to host a disproportionate number of landfills, incinerators and other polluting facilities. These are not only unpleasant to live by but also can pose significant health risks.

We know from epidemiological studies, for example, that rates of asthma, impaired lung function and other respiratory ailments, and cardiovascular disease, are higher in minority and low-income communities, and that these health conditions are often caused or exacerbated by exposure to pollution.

The federal government has long been aware of these disparities, in large measure due to the advocacy efforts of the environmental justice movement, which has been pounding on the doors of the Environmental Protection Agency (EPA) and other agencies for three decades. Most of the policies that are in place have their origin in the Clinton Administration, which initiated a series of policy mandates, research and data-collection initiatives, and enhanced outreach and community capacity-building programs.

Now 20 years later, what do we know about the effectiveness of this presidential executive order, and these other federal policy efforts?

In a published book last month, Failed Promises: Evaluating the Federal Government’s Response to Environmental Justice, I worked with an interdisciplinary team of researchers to answer this question. Unfortunately, we conclude that far too little has been achieved. The EPA in particular has repeatedly and systematically failed to incorporate environmental justice considerations through its core programs and decision-making procedures. In areas ranging from permitting and standard-setting to economic analysis and enforcement, the agency has neither prioritized environmental justice nor made it a regular component of its work.

In addition, the EPA has not taken sufficient strides to meaningfully involve low-income and minority groups in its decision-making. It has not successfully resolved complaints brought under Title VI of the Civil Rights Act, which is designed to prevent discrimination against people who receive federal financial assistance. And the EPA, along with the Department of Justice, has not aggressively used the courts to pursue environmental justice goals.

This failure is bipartisan and long-term and not specific to a particular presidential administration or EPA administrator. Among the central themes that emerge from our study is that the EPA has failed to develop clear policy and technical guidance. That has impeded the conversion of the goals and aspirations stated in the executive order into concrete steps that permit writers, rulemakers, enforcement officials and others should take to consider equity into their decisions.

In addition, the EPA has not effectively coordinated environmental justice activities across the state-level programs it oversees, which has resulted in inconsistent implementation. And finally, there has been a lack of steady leadership, which too has stunted progress.

Despite these discouraging conclusions, there is some reason for optimism. Former EPA Administrator Lisa Jackson made environmental justice a priority during her tenure, and as a result the issue has regained prominence on the agency’s agenda.

Under the leadership of current administrator Gina McCarthy, these efforts have continued. For the first time in two decades, the EPA is taking significant steps through its development of Plan EJ 2014 to translate the intent of the presidential executive order on environmental justice into specific policies and procedures. The agency has developed a number of new tools and guidance materials that, if consistently implemented, have the potential to create real improvements for minority and low-income communities. And, just last week, the EPA announced a new initiative, EJ 2020 Action Agenda, which is a framework to expand upon this recent progress. The disproportionate environmental burdens many poor and minority communities face are the result of a number of factors – many beyond environmental policy – that have materialized over many generations. Only time will tell if the EPA’s new policy initiatives will generate significant and sustained changes in federal environmental decision-making.

To be sure, as we mark this 45th Earth Day, and look forward to Earth Days to come, we should aspire to broaden the environmental gains we have made to date to all Americans.

By David Konisky, Associate Professor at Georgetown University. This article was originally published on The Conversation. Read the original article.
The Conversation
More Articles All Articles
About