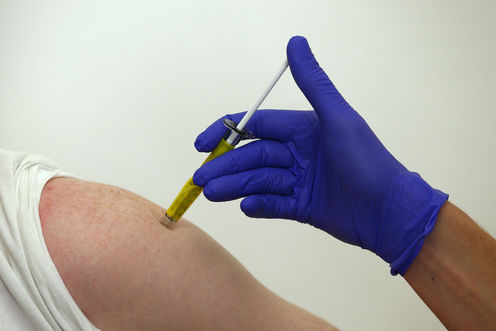 A volunteer receives a trial Ebola vaccine at the Centre for Clinical Vaccinology and Tropical Medicine in Oxford, southern England January 16, 2015. Eddie Keogh/Reuters

Recently, Phase II and III trials of two vaccines for Ebola started in West Africa. The development of possible vaccines is welcome news. Like most vaccine trials, the current Ebola trials are being conducted under ethical guidelines derived from US standards for clinical research in human beings.

Research in humans is a crucial part of our medical system. We need to be able to test that vaccines and drugs are safe and effective in people before they are released to the general public. While standards exist to govern these testing processes, our protections for human subjects of medical experiments are badly outdated.

Vaccines merit public scrutiny especially during the early years of their use and development. Not only are problems most likely to appear while vaccines are being tested, but the volunteers in these early, risky stages often have little political power.

It is useful to look to a vaccine trial conducted 50 years ago where researchers from the US National Institutes of Health studied the effects of a virus called SV40 in human subjects – in this case federal prisoners.

In 1960 scientists discovered that a vaccine culture used throughout the United States had been contaminated with a monkey virus, SV40. Among other things, this vaccine culture had been used to make polio vaccine that had been given to 98 million Americans – more than half the US population at the time.

The discovery raised major concerns. Scientists knew that SV40 caused cancer-like tumors in lab animals and human tissue. But they did not know how it affected living people. In 1963, scientists gathered in La Jolla, California to discuss the “safety of polio and measles vaccines and their possible contamination by viruses capable of causing cancer in lower forms of animals.”

As we report in a recent article, scientists at the time felt that running a controlled clinical trial was the only way to find a definitive answer. But they also felt it would be unethical to experiment on people if one outcome might be cancer. And then an opportunity to do an “ethical” human trial presented itself.

At the same time that the US National Institutes of Health (NIH) learned about the SV40 contamination, NIH scientists were also developing and testing new vaccines on federal prisoners who had volunteered to take part in an intentional infection program. Using prisoners for clinical research was not uncommon at the time. Prior to the 1970s, almost all Phase I and II drug trials were conducted on prisoners. J. Anthony Morris, a molecular biologist at NIH, was testing a new vaccine for the common cold on prisoners. And SV40, the same virus that had contaminated the polio vaccine, had also stowed away in the experimental vaccine Morris was using. Since the prisoners had already been exposed to SV40 once by mistake, scientists decided they had a rare opportunity. Morris and his team created a controlled study to examine the affects of SV40 in humans.

To their relief they found that while SV40 affected the prisoners’ immune response, it fell beneath the threshold of clinical notice. They felt confident that any accidental low dose of SV40 – in polio vaccine, for example – would not affect people’s long-term health.

Our ethical standards are better, but not by much

Since the 1960s, our knowledge about vaccines has improved, and our standards for vaccine trials have evolved. The people used in the 1960s vaccine research — namely, prisoners — were eventually safeguarded under regulations for the protection of human subjects of medical research, which passed in the 1970s.

Now almost 50 years later, the US Office of Human Research Protections has stated that these old rules are inadequate to protect human subjects. Yet research on human subjects has radically expanded both the numbers of human subjects and the transnational reach of the old rules. The US government knows that at the least they need better ways to track adverse events and inform participants about results. They need earlier warning systems and the resources for more systematic governance of clinical trials.

Despite the deficiencies in our human research protocols, medical researchers in other countries have followed US human subject protections since the 1970s. The regulatory apparatus is lagging to such an extent that in 2011, the US government pledged to revise the rules to account for new populations and methods used in 21st century medical experiments. Yet these outdated rules remain unchanged today.

Phase I and II trials are the riskiest, the first tests of new drugs that are done in human beings. In the United States these tests tend to be done on people with little money and lots of time out of the workforce – the very people who most need protection.

Turning our eye to the Ebola trials, we must ask who is taking part and how they will be protected. Experiments for the Ebola vaccine are at risk of being done with the best of intentions on people susceptible to the disease by virtue of geopolitical location and a history of inequality.

By Laura Stark, Assistant professor, Center for Medicine, Health, and Society at Vanderbilt University, and Nancy D Campbell, Associate Dean for Graduate Studies&Research at Rensselaer Polytechnic Institute. This article was originally published on The Conversation. Read the original article.