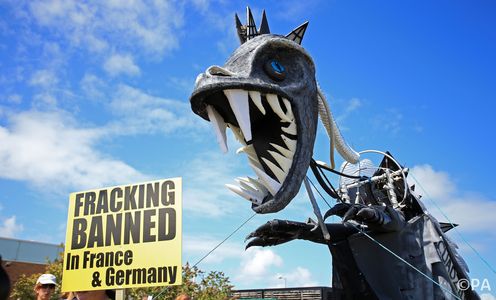 Better get our heads out of the sand and run. Credit: Peter Byrne/PA

By Erik Bichard, University of Salford

The consistent message from those who would seek to exploit shale gas is that it has three distinct advantages over existing forms of fossil fuel energy: it is cheap, it has a lower influence on global warming, and it reduces the reliance in foreign imports.

In the United Kingdom the ability of shale gas to replace substantial amounts of other energy sources is unproven. The International Energy Agency (IEA) says even high levels of shale gas extraction by the middle of the century would still only leave shale on an equal footing with gas, coal and oil.

Claims of low energy prices have been rejected by many commentators including the industry itself. Lord Browne, former head of BP and current chair of the leading shale gas company Cuadrilla, contradicted both the prime minister and the chancellor last year by saying that in the U.K. fracking would not reduce gas prices.

This leaves the mitigation of climate change as the central plank of the shale gas argument. Replacing coal and oil with gas would, it is argued, emit lower carbon dioxide volumes per unit of energy which is a major contributor to global warming.

However, a new report published in the journal Nature shows that this is unlikely to be true either. Haewon McJeon from the US Pacific Northwest National Laboratory along with teams from Australia, Italy, Germany and Austria ran five different models to see what would happen if abundant gas was made available on the market.

They concluded it would indeed change things, but it would not mitigate climate change. Such cheap, available gas would affect CO2 emissions by between -2% and +11%. This in turn would lead to a slight increase in climate forcing (imposed disturbances in the earth’s energy balance) according to most models, of between -0.3% and +7%. This means that large-scale shale gas extraction will actually mean more CO2 emitted into the atmosphere, and more human-generated climate change. It’s certainly some way off the minimum 80% carbon reduction climate scientists say we need to achieve from our energy by 2050.

The researchers explain that an abundance of gas will lead to higher levels of consumption, even when growing populations and wealth are accounted for. If gas is cheap, people will use more of it. This higher consumption assumes that prices of gas will come down, contradicting the industry view in Europe. However, if prices stay the same as oil and coal, the expectation is that impact in global warming will be considerably worse.

The team ran a further unlikely scenario where coal would be effectively outlawed to see the effect of new gas reserves on climate change. This produced CO2 emission reductions of up to -6% – still a long way from the required -80%.

Unfortunately, this is a best case scenario. One of the many concerns about fracking for shale gas is that it produces high levels of fugitive methane, another greenhouse gas which has over 20 times the warming properties of carbon dioxide. When the team modeled this, the upper influence of climate forcing goes from +7% to +12% by 2050. The unequivocal conclusion of the team is that:

This work confirms what the IEA has known for some time. In May 2012 the agency issued a special report on the exploitation of shale gas called Golden Rules for a Golden Age of Gas. Committed readers needed to go past the executive summary and soldier on until the 90th page before reading that if shale gas was fully exploited it would mean global warming will increase to at least 3.5C, well past the comparative safety and current target of 2C.

Politicians have thus far been able to resist the tide of academic works that have shown why exploiting a new source of fossil fuel may not be a particularly great idea. This latest report is particularly stark and has a better chance than most to divert evidence-based policy towards a more sustainable direction.

Erik Bichard, Professor in Regeneration&Sustainable Development at University of Salford, does not work for, consult to, own shares in or receive funding from any company or organization that would benefit from this article, and has no relevant affiliations.