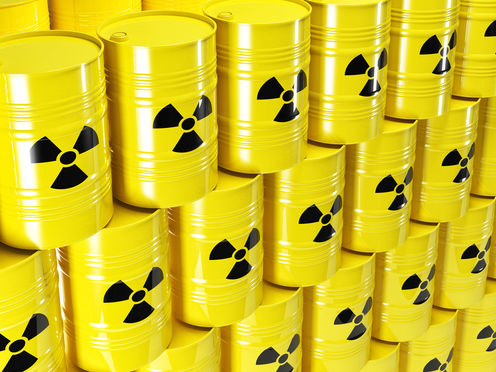 A very unusual exchange is about to take place over the Atlantic. The UK is sending some 700 kilograms of highly enriched uranium to be disposed of in the US, the largest amount that has ever been moved out of the country. In return, the US is sending other kinds of enriched uranium to Europe to help diagnose people with cancer.

The vast majority of the UK’s waste comes from its fleet of nuclear power stations. Most of it is stored at the Sellafield site in north-west England. But the material being sent to the US is a particularly high (weapons usable) grade of enriched uranium that you wouldn’t want to move to Sellafield from its current location at Dounreay in the north of Scotland without building a new storage facility – presumably more expensive than the cost of transportation.

The decision to move this radioactive waste out of the UK has been presented as making it harder for nuclear materials to get into the hands of terrorists, but this is implausible. The UK is capable of managing homegrown highly enriched uranium itself. The plan also contradicts the principle that countries are responsible for managing their own nuclear legacy.

The announcement draws new attention to an old issue: how to find a long-term solution to nuclear waste. Countries with atomic weapons or civilian nuclear power have been wrestling with this for several decades. This is partly because the problem was neglected for years, but more fundamentally because governments have failed to develop a strategy acceptable to the communities affected.

This reflects the uniqueness of the problem, of course – we are talking about substances which could harm human health for tens of thousands of years into the future. It raises profound ethical issues of equity between generations.

The scientific community does in fact agree on how to dispose of these materials safely: deep underground in appropriate geology such as clay or granite, with well engineered radiation barriers as an extra defence. Yet only Sweden and Finland, with political systems built on more trust and consensus than most countries, have a clear repository plan – and it will be several years before they become operational. Most of the storage facilities at Sellafield are designed to last mere decades. The UK has been sporadically focused on deep disposal since the early 1980s, but for a long time approached it top-down and secretively. This became known as the “DAD” method – decide, announce, defend. But it has always led to “abandon” when local communities, having had no part in the siting decision, have rebelled successfully.

It was not until 2008 that the government introduced a system of rules under which local communities would conditionally volunteer a site and then negotiate a deal with the authorities. So far it has produced no result: attempts by district councils around Sellafield to volunteer it were overruled in 2013 by Cumbria county council, the local-authority tier above them, and no other communities have come forward. The government has reserved the right to override the voluntary process but shows no sign of doing so yet.

In such circumstances it becomes tempting to look for short cuts. One occasionally raised is to put all the world’s problematic waste somewhere very remote like the west Australian desert. This is a non-starter. The Czech and Slovak experience illustrated this. As a single country they planned a single repository, but after their “velvet divorce” each insisted it would not permanently manage the other’s waste. Such an international solution also contradicts the aforementioned issue of being responsible for your own legacy. The other major hope is that science will find a convincing way either to use waste as fuel for reactors, and/or that “partitioning and transmutation” would drastically reduce the half-lives of the relevant isotopes. Yet these approaches are complex and expensive, involving molten salt reactors or accelerator-driven systems. And critically, there would still be some volume of long-lived waste that needed to be managed – no method can yet promise to drastically reduce the half-lives of all the different waste types. The only credible way forward is deep burial.

In the absence of a deep-disposal plan, the UK has a more immediately pressing issue – what to do with Sellafield’s contaminated materials and waste from the UK’s near-70 years in the nuclear power and weapons business, much of which is housed in dilapidated facilities that are not fit for purpose. The Nuclear Decommissioning Authority (NDA)expects it will cost some £68 billion to clean up Sellafield by stabilizing and safely packaging the waste and building new stores. This will only be completed by around 2120.

This problem is at least now getting serious attention and resource – despite the climate of public austerity. Currently the country is spending over £1.5 billion a year on the site, which is one of the most hazardous in Europe.

Sellafield stores a further 140 tonnes of waste plutonium that also stems from British and some overseas nuclear power. If used in bombs this amount could obliterate humanity several times over. The NDA is now focusing on what to do about this too, after years of political inattention. Yet the decision-making is labored and the currently favored solution of using the plutonium as fuel for conventional reactors lacks credibility – no operator wants to use plutonium-based fuel because it is more difficult and expensive to manage than conventional fuel; and moving it around the country is a security risk.

So nuclear waste remains the Achilles heel of the nuclear industry, in the UK and elsewhere. While the financial problems behind the proposed new nuclear station Hinkley Point C attract most of the headlines, the waste problem hangs over the industry behind the scenes. Until we find a way forward that is scientifically and politically acceptable, it will continue to do so.

By Gordon MacKerron, Professor of Science and Technology Policy, University of Sussex. This article was originally published on The Conversation. Read the original article.