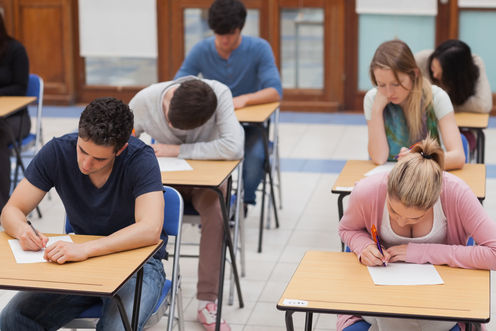 What role do genes have to play in children's exam results? Student test by  wavebreakmedia
/Shutterstock

The idea that children can inherit the ability to get good results at school can spark heated debate. But, put simply, all this means is that children differ in how easy and enjoyable they find learning and that these differences are to a large extent explained by differences in their genes, rather than differences between schools or teachers.

We know from previous research that educational achievement in primary, middle school years and at the end of compulsory education is highly heritable. Heritability is a population statistic – it doesn’t tell us anything about a single individual. It describes the extent to which differences between children can be put down to DNA differences, on average, in a particular population at a particular time.

Our new study, published in the journal Proceedings of the National Academy of Sciences, focused on the UK-wide standardized exam results at age 16, the General Certificate of Secondary Education (GCSE). We obtained exam grades from over 13,000 identical and non-identical twins from the Twins Early Development Study who were also assessed on nine broad psychological domains, including intelligence, educational self-belief, personality, behavior problems, and well-being.

Our study showed that the mean results in the GCSE core subjects of English, mathematics and science is more heritable (62%) than the nine other psychological domains (35–58%) we looked at.

This means that differences in how well children perform at exams are to a large extent explained by the difference in their DNA. Importantly, it does not mean that genetics explain 62% of a single child’s school achievement.

When we analyzed different traits, we found that educational achievement is correlated with many characteristics of children, not just intelligence. Our results indicate that these correlations are largely mediated by genetic factors. To the extent that children’s traits predict educational achievement, they do so largely for genetic reasons.

The children in this study were all taught the national curriculum, so to some extent received a similar education. As children’s learning experiences become more similar, they begin to explain the similarities between them rather than the differences between them. As a result of these diminished environmental differences, the relative genetic influences increase. So in a way, high heritability is an indicator of equality.

So what to make of this? Genes are important, not just in educational achievement or intelligence, but in a whole raft of other traits which contribute to how easy and enjoyable children find learning. Education is more than what happens passively to a child. Children are active participants in selecting, modifying, and creating experiences that are matched to their genetic predispositions. In genetics, this is known as “gene-environment correlation”.

At the practical level, our findings add support for the trend in education toward personalised learning rather than a one-size fits all model. None of this means that schools, parents or teachers aren’t important. Of course they are – and each has an important role in helping children achieve the best of their potential.