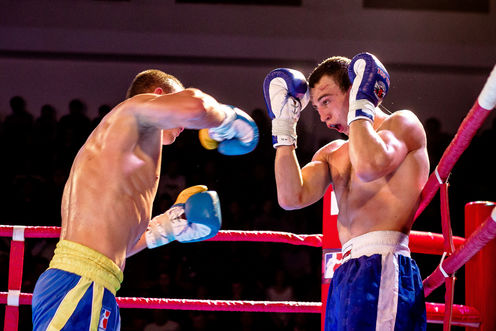 The tragic death recently of a young Queensland boxer raised the question of safety in the sport and whether boxing should be banned.

Claims that boxing is safer than a number of very popular and well-accepted sports warrant careful scrutiny as they often derive from overly simplistic analyses.

The risks associated with boxing should never be trivialized, but science and technology could possibly help to mitigate them.

Between 1890 and 2007 at least 1,216 boxers (923 professionals, 293 amateurs) died from acute injuries, particularly to the head and neck, with subdural hematoma the most common cause of death.

Additionally, boxing can lead to chronic brain injury through cumulative head impacts. About 20% of professional boxers eventually suffer from dementia pugilistica, characterized by discernible anatomical changes to the brain and diverse neurological symptoms.

The incidence of less severe pathological and functional deficits is likely much higher. Magnetic resonance imaging of the brains of 76 boxers showed that 38% of professionals and 11% of amateurs had abnormalities probably resulting from boxing.

In another study, more than a third of 61 amateur boxers (but no age-matched controls) had raised levels of anti-hypothalamic and anti-pituitary antibodies, suggesting that head trauma had produced an auto-immune response that could compromise pituitary function.

Other concerns about boxing

Arguments against boxing are not exclusively medical.

Ethicists contend that intent to harm the opponent is a core element of boxing and that occasional catastrophic consequences therefore cannot be considered entirely accidental. Legal experts note that boxing consists of activities that in other contexts would constitute criminal assault.

There are also perceptions that the sport entails exploitation of vulnerable young people by profit-hungry entrepreneurs and promotes the idea that physical violence is acceptable and may even yield fame and fortune.

Despite the concerns, boxing retains widespread support. Some arguments can be mounted in its favor. It is accessible even in dense urban environments and underpins popular physical fitness programs.

For many participants, it offers hope of escape from poverty, pride in mastery of complex skills and opportunity to build identity.

It has catalyzed positive social change and has inspired much literature and art. Most professional boxers reportedly love the sport (although more than 80% would not want their children to pursue it).

The greatest impetus for continued legality of boxing is probably financial.

Professional boxing is big business. Boxers have received purses of more than US$50 million for single world championship bouts and huge profits can be generated through gate receipts, pay-per-view television sales and gambling.

A sport able to produce such substantial economic activity will always have political supporters. Professional boxing was banned for more than 30 years in Sweden and Norway, but the bans were recently rescinded.

Attempting to make boxing safer might be the most pragmatic approach. But how might this be achieved?

There is demonstrable scope for modifying boxing through scientific and technological advances. Maximum durations of professional bouts have been reduced based on evidence that this decreases serious injury risk.

As long ago as the 1960s, there were efforts to develop pneumatic boxing gloves to diminish impact forces. Potential exists to design better head guards. Modified forms of boxing involving subjective restriction of punch forces have arisen in various locations.

But there is advocacy for more radical change.

Various authorities have proposed removing the head and neck from the target area. The American Medical Association recommends combining this with development and use of low-impact gloves.

The Australian Medial Association, while opposed to all forms of boxing, suggests that there should at least be decreased emphasis on scoring head blows and an increase in glove size.

A version of boxing incorporating these recommendations has evolved in Australia over the past nine years.

Called Box'Tag, it also makes use of an automated scoring system developed through research collaboration between the Australian Institute of Sport and CSIRO.

The sensor fabric incorporates stripes of silver-coated nylon yarn through which a low-level electrical current can be run. A small transceiver worn at the back of the vest generates the current. Patches of conductive material are affixed to the gloves. When this material bridges two vest stripes a change in the electrical resistance of the vest occurs, enabling impact detection.

Electrical resistance data are transmitted by Bluetooth to a ringside computer, where customized software determines whether a point is awarded. Scores can be displayed in real time.

The scoring system rewards light rapid, punching rather than forceful impacts. It provides an option for assigning handicaps to contestants, so facilitating bouts between athletes of differing standards.

Despite prohibition of head and neck impacts, Box'Tag contestants wear protective equipment, including head guards, to diminish effects of any accidentally misdirected contacts. Gloves incorporating bladders to reduce impact forces are in use but require further iteration.

Popularity of the safer sport

Presently, the modified form of boxing is being practiced at only a few clubs. Research by myself and colleagues shows that it has gained enthusiastic participation in those settings, with safety among the major attractions. Its potential for wider uptake remains to be investigated.

Box'Tag overcomes essentially all the objections to conventional boxing although the modifications are likely too substantial to gain universal acceptance and replace traditional professional boxing events.

While Box'Tag provides for audience involvement through ability of spectators to submit SMS messages indicating their subjective assessments of contests, its elimination of knockouts and blood flow will almost surely prevent it from ever attracting big crowds and therefore the sponsorship and TV interest enjoyed by professional boxing.

But learnings from the development of Box'Tag may help fuel the emergence of several different forms of modified boxing that together can satisfy the requirements of diverse interest groups while all providing some enhancement of safety.

Over time, a few of the modifications might be adopted into traditional boxing with significant benefit to the sport.

By Allan Hahn, Adjunct Professor at University of Canberra. Hahn has received funding from the Olympic Solidarity Commission of the International Olympic Committee, the Queensland Academy of Sport, Boxing Australia Limited, a joint research program of Commonwealth Scientific and Industrial Research Organisation and the Australian Institute of Sport, and the Cooperative Research Centre for Microtechnology to explore development of modified boxing.This article was originally published on The Conversation. Read the original article. Top image: WorldSeriesBoxing, CC BY-ND