Between 6 and 8 million people worldwide suffer from inflammatory bowel disease, a group of chronic intestinal disorders that can cause belly pain, urgent and frequent bowel movements, bloody stools and weight loss. New research suggests that a malfunctioning member of the patient’s own immune system called a killer T cell may be one of the culprits. This discovery may provide a new target for IBD medicines.

The two main types of IBD are ulcerative colitis, which mainly affects the colon, and Crohn’s disease, which can affect the entire digestive tract. Researchers currently believe that IBD is triggered when an overactive immune system attacks harmless bacteria in the intestines. Although there are many treatments for IBD, for as many as 75% of individuals with IBD there are no effective long-term treatments. This leaves many patients without good options. 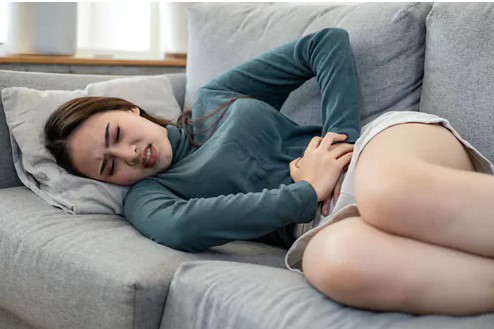 I am a physician-scientist conducting research in immunology and IBD and in a new study, my team and our colleagues specializing in immunology, gastroenterology and genomics examined immune cells from the blood and intestines of healthy individuals and compared them with those collected from patients with ulcerative colitis to gain a better understanding of how the immune system malfunctions in IBD. There are many reasons why current treatments aren’t permanent, but one reason is that scientists don’t fully understand how the immune system is involved in IBD. It is our hope that closing the current knowledge gap about how the immune system is involved in this disorder will eventually lead to new durable treatments for IBD that target the right immune cells. 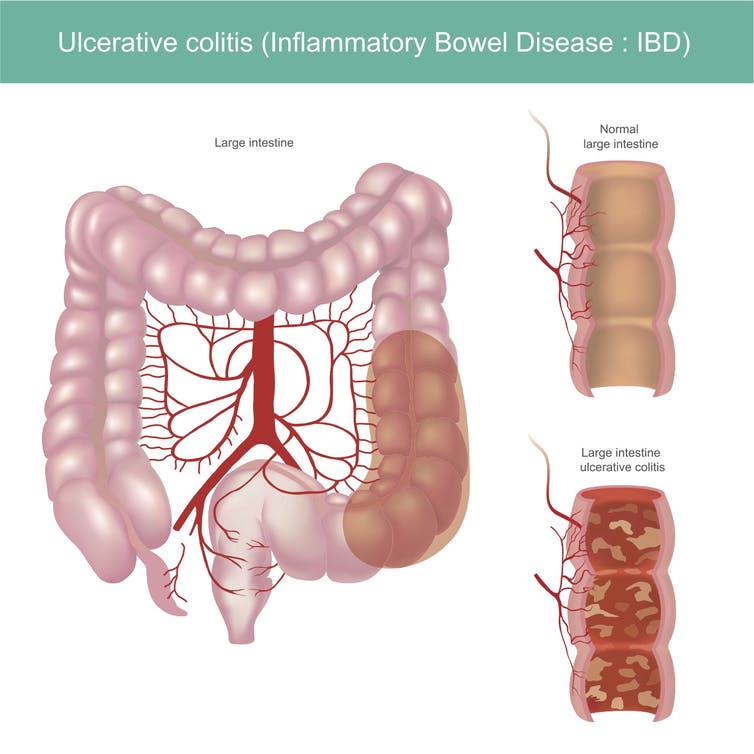 Ulcerative colitis is a type of inflammatory bowel disease that results in chronic inflammation and damage to the large intestine. Graphic_BKK1979/iStock via Getty Images

The immune system can be divided into innate and adaptive branches. The innate branch is our first line of defense and acts quickly – within minutes to hours. But this system senses changes caused by microbes generally. It does not mount a targeted response against a specific pathogen, which means that some invaders can be overlooked.

The adaptive branch is designed to detect specific threats, but is slower and takes a couple of days to get going. T cells are a part of the adaptive immune system and can be further subdivided into CD4⁺ and CD8⁺ T cells.

CD4⁺ T cells are helpers that aid other immune cells by releasing soluble molecules called cytokines that can induce inflammation.

CD8⁺ T cells can also release cytokines, but their main function is to kill cells infected by microbial invaders. This is why CD8⁺ T cells are often referred to as serial killers.

After the infection is cleared and the pathogen has been destroyed, cells called memory T cells remain. These memory T cells “remember” the pathogen they’ve just encountered and if they see it again, they mount a stronger and faster response than the first time. They and their descendants can also live for a long time, even decades in the case of certain infections like measles.

The goal of a vaccine is to provide a preview of the microbe so that the immune system can build an army of memory cells against an infectious agent, such as SARS-CoV-2, the virus that causes COVID-19. That way, if the virus attacks, the memory T cells will spring into action and activate an immune response including the production of antibodies from B cells.

Immunologists further subdivide memory T cells into different classes depending on if and where they travel in the body. Circulating memory T cells are scouts that look for signs of infection by patrolling the blood, lymph nodes and spleen.

Tissue-resident memory cells, abbreviated TRM, are sentries stationed at key ports of entry into the human body – including the skin, lungs, and intestines – and act rapidly to counter an infectious threat. Intestinal TRM also function as peacekeepers and do not tend to overreact against the many harmless microbes living in the intestines.

In the new study, our team analyzed blood and intestinal samples to discover that intestinal CD8⁺ TRM come in at least four different varieties, each with unique features and functions.

We noticed that individuals with ulcerative colitis had higher numbers and proportions of cells belonging to one of these four varieties. This particular variety, which we’ll call inflammatory TRM here, carried instructions to make very large amounts of cytokines and other protein factors that allow them to kill other cells. High levels of certain cytokines can cause inflammation and tissue damage in the body.

It seems that in individuals with ulcerative colitis, the balance of memory cells is shifted in favor of this rogue population of inflammatory TRM that may become part of the problem by causing persistent inflammation and tissue damage.

We also found evidence consistent with the possibility that these inflammatory TRM might be exiting the intestinal tissue and entering the blood. Other studies in mice and people have shown that TRM, despite being called “tissue-resident,” can leave tissues in certain circumstances. 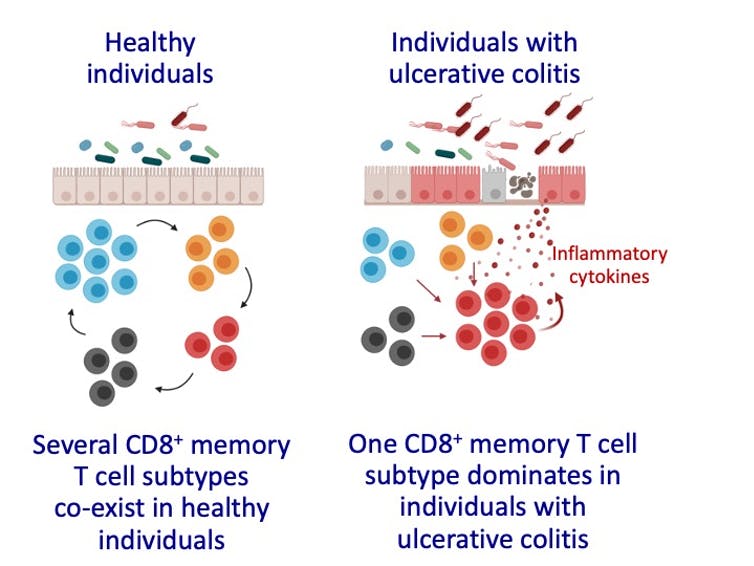 IBD and other autoimmune diseases as a memory problem

The very features that make memory T cells so desirable for vaccines – their capacity to live for such a long time and mount a stronger response when they encounter a microbial invader for the second time – may explain why autoimmune diseases are chronic and lifelong.

It is important to point out that none of the current drug treatments for IBD specifically target long-lived memory cells, which might be a reason why these therapies don’t work long-term in many individuals. One therapeutic approach might be to target inflammatory TRM for destruction, but this could result in side effects like suppression of the immune system and increased infections.

Our findings build on previous studies showing that different TRM varieties, like the CD4⁺ subtype, may also be involved in IBD, while other studies show that TRM play a role in autoimmune diseases affecting other organs like the skin and kidneys.

The possibility that T cell memory is co-opted in IBD is exciting, but there is much that we still don’t understand about TRM. Can we selectively target inflammatory TRM for destruction? Would this be an effective treatment for IBD? Can we do so without causing major side effects? Further research will be needed to answer these important questions and to strengthen the link between TRM and IBD.

By John Chang, Professor of Medicine, University of California San Diego. Chang receives research grant funding from the National Institutes of Health, the Kenneth Rainin Foundation, Takeda, and Eli Lilly. This article is republished from The Conversation under a Creative Commons license. Read the original article.