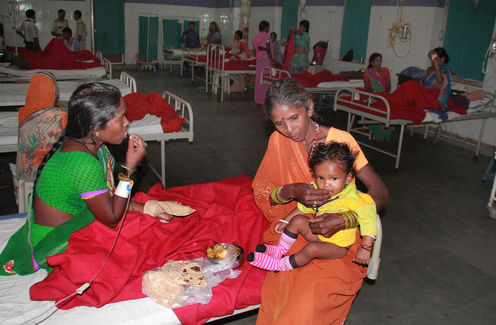 A sterilization camp held in Chhattisgarh, an impoverished state in central India, has claimed the lives of 13 women, most of whom were young and marginalized. The women, who died within hours of the procedure, were among a group of 83 patients sterilized over the course of just five hours at the mobile clinic.

It now appears they died as a result of contaminated medicines. The incident raises critical questions about surgical standards, infection control protocols and post-operative care in India’s reproductive health and family-planning program.

The tragedy that unfolded at this clinic shows how urgently the approach taken to sterilization in India needs to be changed. Warnings have been made before about conditions in these camps. In 1994, as part of a team of researchers, I observed 48 procedures carried out in just over two hours at a camp in Kerala, a state in southern region which ranks the highest among Indian states in terms of human capital, social and health development.

Yet, surprisingly, regulations were being violated at the campsite and poor hygiene standards and a lack of decent infrastructure were clear. There was inadequate counseling for the patients undergoing sterilization and they were not getting follow-up attention.

The history of sterilization

The debate on the quality of care in Indian family planning programs dates back even before this time though. The government first introduced mass sterilization camps in the 1970s. At that time, India and China had similar fertility rates of six children per woman.

The two countries took different routes in response to the problem but both were seeking long-term solutions to controlling their rapid population growth. Female sterilization continues to be the most popular and dominant method of contraception in India. This is especially the case in southern states, which managed to achieve a fertility below replacement level way back in the late 1980s and 1990s – so each couple had just enough children to replace them.

The program initially promoted vasectomies and targeted couples with two or more children. The government set targets and health providers were offered cash incentives to recruit eligible couples for sterilization. Many men, including those who were unmarried and illiterate – or were political opponents of the government – were coerced into accepting sterilization without consent.

The vasectomy program was deemed a major failure. There was serious a public backlash, blaming the government for forcing sterilization on poor people. Evaluations of the program identified weaknesses including method failure, side effects and sub-standard quality of care during and after the procedure. The ruling Congress government even had to step down during an emergency period in 1975-77, following allegations made about the coercive family planning program.

Since the 1980s, sterilization programs have focused solely on women. Now, more than two-thirds of contraceptive use in India is female sterilization. In some southern and western states, as many as 50% of women have been sterilized. The method has been widely used, mostly by young women, across India for more than three generations.

In most cases, women have few options and rely directly on sterilization as the first method of contraception they ever use. Although the government removed family planning targets in 1998, there is still evidence of coercion in sterilization camps in many parts of India.

There are national guidelines about how sterilization camps should be organized, the clinical training that staff need to receive and the essential medical supplies that should be on hand – including antiseptic solutions and drugs. Sterilization camps, in mobile or institutional settings, mostly operate at the district or sub-district level and are co-ordinated by the district health administrators.

For both clients and providers, the camps are convenient, easy to access and cost-effective. Only qualified and trained medical professionals are allowed to conduct sterilizations.

Local health workers recruit women or their husbands and usually arrange transport facilities to the camps. They have to provide adequate information about the procedure to clients including potential side effects, indications and contra-indications associated with the method.

The clients are expected to declare their age, family information, medical history and physical and mental health status before the procedure. They should undergo physical and laboratory examinations prior to the surgery. The protocols require clients to make an informed, voluntary decision to be sterilized and counseling services are offered to help them make that choice.

There is, however, evidence to suggest that in most camp settings, these protocols are overlooked or violated for the sake of convenience or due to high case loads. Botched sterilization surgeries have been reported on a number of occasions in India, especially in remote and deprived areas.

Level of care and negligence has remained a major concern more generally in the delivery of family planning services and particularly those requiring clinical assistance.

The Indian population is still growing at an annual rate of 1.2%. Larger states such as Uttar Pradesh, Bihar and Rajasthan are predicted to almost double in size over the next 30 years. On the other hand, young couples in India increasingly want small families. And given persistently high rates of early marriages and long exposure in the reproductive life, sterilization is a highly effective method that limits the number of unwanted pregnancies and abortions. In fact, there is a high use of sterilization among women who have just given a birth and those who have had an abortion.

Undoubtedly, a long-term solution is educating and empowering women to make informed choices. There is a dire need for considering innovative strategies to promoting family planning information, education and counseling services – especially in rural areas where women are often forced to surrender to the state-sponsored and incentive-based family planning programs.

Program managers need to ensure gender balance in the promotion of contraceptive methods. That could mean revisiting vasectomy as the preferred option, since it is relatively less risky than tubectomy or laproscopy.

With such a high demand for reproductive care, it is essential that health systems offering family-planning services at various levels are systematically monitored and evaluated to ensure that quality of care standards are met. Even though these camps might be coercing some into sterilization, there is evidently high demand for the procedure. So the standard of care on offer must be guaranteed or more women will be risking their lives.

Sabu S Padmadas, Professor of Demography and Global Health at University of Southampton, does not work for, consult to, own shares in or receive funding from any company or organization that would benefit from this article, and has no relevant affiliations.