Is Immolation A Valid Punishment Under Islamic Law?
By The Conversation | February 6th 2015 01:32 PM | Print | E-mail 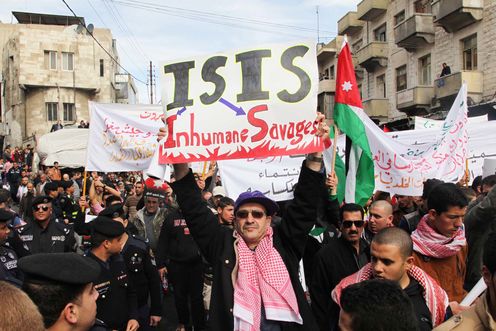 There is confusion about whether immolation is permissible under Islamic law. EPA

By Jon Hoover, Associate Professor of Islamic Studies, Faculty of Arts a University of Nottingham

The killing of Jordanian pilot Moaz al-Kasasbeh by Islamic State has been explained as an act of retaliation for the air campaign against it. But there have been many questions about whether immolation is a valid form of punishment in Islamic law – and many Muslim scholars have argued that it is not.

This is where the 14th-century Muslim scholar Ibn Taymiyya comes in. The 22-minute video of al-Kasasbeh’s murder ends with a quotation from his works and has sparked much debate. Retaliation and vengeance, as well as retribution, are perhaps important categories for making sense of the killing but they miss Islamic State’s stated intention: deterrence and a call to convert.

Ibn Taymiyya of Damascus was one of the most prolific and sophisticated scholars of medieval Islam, and his legacy is fiercely debated today.

It is not only jihadist ideologues who take inspiration from him, but also a wide range of Salafis, modernists and even philosophical theologians. Debate has been most intense over whether Ibn Taymiyya’s religious rulings against the Mongols threatening Syria in the early 1300s can be used to justify jihadist violence today.

The Mongols had converted to Islam, but Ibn Taymiyya ruled that they should be fought anyway because they resembled the rebel Kharijis of early Islam. Some contemporary jihadists have invoked Ibn Taymiyya’s anti-Mongol rulings to justify making enemies of fellow Muslims. Most Muslim scholars, on the other hand, insist that Ibn Taymiyya’s rulings are certainly not relevant for today and were perhaps even imprudent in their time.

Islamic State’s video does not cite Ibn Taymiyya’s anti-Mongol fatwas but it does feature a quote from him as justification for the murder of al-Kasasbeh:

If in public exemplary punishment (tamthil) there is a call to [the unbelievers] to believe or a deterrence for them from hostility, then it is here [a matter of] carrying out the prescribed punishments and legal jihad.

The Arabic word tamthil, which I have translated as “exemplary punishment”, is often understood to include mutilation of the body. But the text provides no explicit justification for immolation, and I do not know whether Ibn Taymiyya could be cited to legitimate that kind of punishment. Rather, the point of the quotation is to provide pragmatic reasons for punishing enemies: it is to deter them from fighting against the Muslims and even to draw them to Islam.

I found the video’s quotation in two collections of Ibn Taymiyya’s works, first in a 1987 edition of Al-Fatawa al-kubra (5:540), and second in the jihad section of the Supplement or Mustadrak to Majmu‘ al-fatawa (3:223-4). There are minor differences between these two texts and the quotation in the video. For example, the video reads “public” (sha’i‘) to speak of exemplary punishment where my two sources read “permissible” (sa’igh). Jordan has launched heavy attacks on IS in response to the murder. EPA

Ibn Taymiyya’s argument in the two texts is that, in war, Muslims have a right to retribution and vengeance if enemy unbelievers punish them in a way that makes a public spectacle of them. However, Muslims need not retaliate at all, and this is fact better because it adds nothing to the jihad effort.

Yet, if punishing unbelievers is not a matter of vengeance and retribution but rather calling the enemy unbelievers to faith or deterring them from hostility, then the exemplary punishment of unbelievers is justified as part of jihad and carrying out punishments prescribed by Islamic law.

If Islamic State fighters are reading Ibn Taymiyya closely, we need to take that seriously. In this context, this video and others are a carefully calculated strategy of war, not simply mindless acts of violence. Whether they are in fact deterring hostility and inviting to faith is of course open to serious question – and whether Ibn Taymiyya is to be blamed for all of this is another question entirely.

No one needs Ibn Taymiyya to remind them that success in war requires pragmatic calculation – Islamic State simply cites him to add prestige to its effort. However, this scholar in particular can perhaps be helpful in reminding us all to avoid the trap of vengeance and a senseless cycle of retaliation.