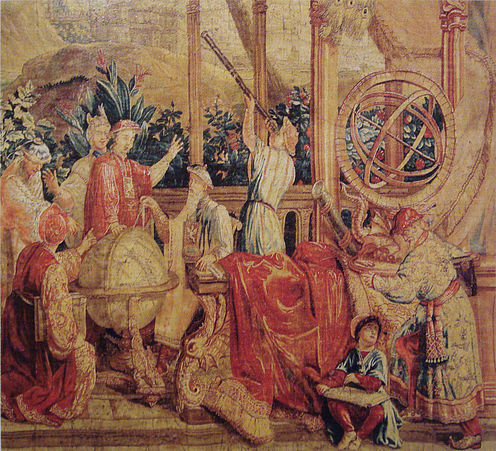 A Catholic, a Jesuit and a scientist walk into a bar. What do they have to talk about? And just how do those conversations go?

This scenario is no joking matter. Conflict as well as collaboration have characterized the historical relations between these three parties since the founding of the Society of Jesus, nearly 500 years ago. How do these three interact today in an era of “War on Science” that tends to politicize so many scientific issues?

With a pope at the helm of the Roman Catholic Church who is at once the first Jesuit to hold the post, a man of science (as many commentators have emphasized) and a voice for how the world’s 1.2 billion Catholics ought to think about scientific issues in light of their religious commitments, it’s worth looking into the past and potential futures for science and Catholicism through a Jesuit lens.

From the start, members of the Society of Jesus were men on a mission. In the critical years after the Society received papal approval in 1540, one early Jesuit, Jerónimo Nadal, wrote to his confreres that the houses in which they dwelt included “the journey” itself, by which “the whole world becomes our house.” Unlike monks bound by a vow of stability to a particular monastery, Jesuits committed themselves to walk in the world for the sake of their ministries. Missions were a principal Jesuit ministry both in the Catholic heartland and beyond the historical bounds of Christendom. The historical and global dimensions of the Jesuit enterprise may be measured by their numbers – already nearly 1,000 priests, brothers and novices dispersed across Italy, Spain, France, Germany, Portugal, Brazil, Ethiopia, India and Japan over Society founder Ignatius of Loyola’s lifetime. Even with a significant decline over the course of the 20th century, it is still the largest single Catholic religious order of men, with over 17,000 members worldwide in 2013.

Science a part of Jesuit mission from the start

Their journey into the world led the early Jesuits to take on schools and colleges as part of their ministry. When the Society was suppressed in 1773, some 700 educational institutions were under its supervision. Jesuits are still active in education today, with 28 colleges and universities in the United States alone. And Jesuit missions and schools together have long provided an institutional framework housing both science education and research.

Science emerged as a particular opportunity for the expanding Society’s ministries. Mathematical sciences and natural philosophy – and the modern scientific disciplines that emerged from them – were vital for the Jesuits to successfully compete in the educational marketplace. They often set themselves apart by offering more thorough science instruction than other institutions. Engraved title page of Clavius' 1596 book on astronomy. By courtesy of the Department of Special Collections, Memorial Library, University of Wisconsin-Madison.

An early example of Jesuit science was Christoph Clavius (1538-1612), who taught and researched at the Jesuit college in Rome for some 40 years. He wrote treatises on arithmetic, geometry, trigonometry, algebra, astronomy, instrumentation and calendrics that traveled widely throughout the Jesuit network of schools and missions.

When some of Clavius' students went to China, they drew heavily on his writings to publish on scientific topics in Chinese. Their successors likewise made use of Jesuit scientific resources to meet the interests of their Chinese auditors. Seeking audiences with scientific interests, whether in or out of the classroom, often meant showing that Jesuits were keeping up with the latest developments. The frontispiece to Jesuit Giovanni Battista Riccioli’s New Almagest (1651), for example, made clear the rapid development of astronomy in recent decades.

The telescope Argos holds to his knee points toward the phases of Venus and Mercury, Jupiter’s satellites, the moon’s cratered surface and Saturn’s bulging “arms.” And Riccioli examined 126 arguments that could be made about Copernicus' sun-centered system: 49 for, 77 against.

An overarching institutional commitment to science is visible in the globe-spanning networks of seismological stations and the 74 observatories the Society of Jesus operated following its restoration in 1814. It continues to provide qualified personnel for the Vatican Observatory, staffing both its facility outside Rome as well as the Vatican Advanced Technology Telescope, the latter part of the Mount Graham International Observatory in southeastern Arizona.

Jesuit science sometimes out of step with Catholic mainstream

Clearly, Jesuits stand out among Catholics in a world where faith and science often seem to be in conflict. Of course, we’re long past the litmus test of the Galileo affair, which focused on the clash between the earth-centered Ptolemaic and sun-centered Copernican views of our solar system. But Jesuit investment in scientific work has not always been celebrated. Jesuit directors of the Imperial Astronomical Bureau in Beijing in the 17th and 18th centuries faced heavy criticism from Protestants, their co-religionists, and even their confreres for what many saw as a role incompatible with their apostolic duties and spiritual character.

Just this year, two Jesuit scientists – George Coyle, director emeritus of the Vatican Observatory, and Agustín Udías, professor emeritus of geophysics – argued that the “Jesuit scientific tradition” was a “special apostolate in the Catholic Church” and that “the field of scientific research” was itself “a mission territory.”

That this argument still needs to be made is telling. But so too is Pope Francis’ recent appointment of MIT- and Arizona-trained Detroit native Guy Consolmagno as director of the Vatican Observatory, the latest in a long line of Jesuits to fill the post. Brother Consolmagno’s outreach has included a visit to The Colbert Report in 2009. Comedy Central

Last year Consolmagno received the Carl Sagan Memorial Award for Public Understanding of Science from the American Astronomical Society, given for his work as a “voice of the juxtaposition of planetary science and astronomy with Christian belief, a rational spokesperson who can convey exceptionally well how religion and science can coexist for believers.” He’s even filled Stephen Colbert in on the Vatican position on extraterrestrial life.

Pope Francis, for his part, took the announcement of Consolmagno’s Vatican Observatory appointment as another occasion to urge further dialogue between religion and science. Will Catholics notice a difference in Church attitude toward science from that under Pope Benedict XVI? Osservatore Romano/Reuters

It’s hard to predict how Pope Francis' background and leadership might influence the Catholic church’s stance on contemporary scientific issues. But in a major 2013 interview, he emphasized Ignatian discernment – the patient process of perceiving how “great principles must be embodied in the circumstances of place, time and people” – as fundamental to “real, effective change.”

That description bears comparison with how the Jesuit physicist Timothy Toohig thought of his work in helping build Fermilab in Illinois, the Superconducting Super Collider in Texas (for which he led a public prayer when the House of Representatives voted again to cancel its funding), and the Large Hadron Collider at CERN in Switzerland.

Toohig addressed both scientists and his fellow Jesuits on how physics research was akin to the search for God. For Toohig, “honesty” in “confronting data, even when they might contradict my previous experience and expectations” and in recognizing “the tentative quality of both our knowledge and our ignorance” was critical to “Ignatian discernment,” the process through which discoveries – scientific as well as spiritual – are made.

The same seems to be the case for this pope, for whom “the Jesuit always thinks, again and again, looking at the horizon toward which he must go, with Christ at the center.” Keeping that horizon in sight while paying close attention to current scientific research and its implications led to this year’s environmental encyclical “Laudato Si.” The papal letter cites not only the “Canticle of the Creatures” by Saint Francis of Assisi, the pope’s namesake, but also the 1992 Rio Declaration on Environment and Development and the 2000 Earth Charter.

While the Big Bang and evolution are settled issues for this pope, end-of-life issues are likely to be part of his ongoing process of discernment. Stem cell research will also have his attention as the Vatican prepares for its third conference on cell therapy. And there’s no question that the world has its attention on him.

But who will follow Pope Francis as he walks a Catholic path in today’s world? Surely that path will not be catholic enough to accommodate all possible intersections of current science and today’s religious beliefs and practices.

Yet it will likely be one guided by careful consideration of how mainstream science accords with a broader spiritual horizon. While this pope’s leadership on specific scientific issues will not suit everyone, it promises to give the world an illuminating example of how science and religion might progress together.