Hank Campbell
Literature scholars love to debate Shakespeare. Like 'the greatest baseball player of all time' everyone can have an opinion and they are all just as valid, if even a modicum of thought went into it.(1) He was real, he was not real, he was a fraud, he was the greatest writer of all time, he was a woman, you name it and someone in the humanities has argued for it.

He was Catholic? Catholics say so, at least after the fact, but that evidence is circumstantial, like everything else except his writing.

It takes some suspension of disbelief and no small amount of cultural meandering to conclude he was Catholic though he was a member of a Protestant church and hung around with Catholic apostates, and to make him a Jesuit takes even more. The Jesuits are the short form name of the Society of Jesus, founded by the Spanish soldier (and later Saint) Ignatius of Loyola and officially approved by Pope Paul III in 1540. During the Counter-Reformation, the Catholic re-modernizing that took place in light of Martin Luther declaring that Catholicism was not conservative enough before everyone else decided it was not liberal enough, the Jesuits were important to getting with the times. But it seems a little Forrest Gump-ish to have Shakespeare be not only secretly Catholic, when that was uncool in England, but also a Jesuit. 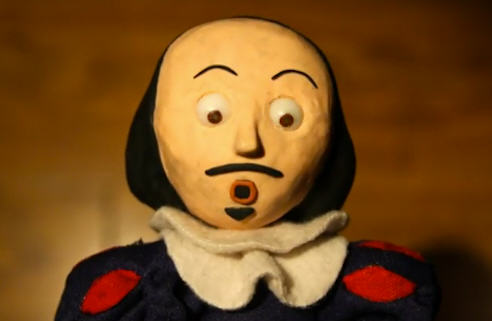 The genesis of the speculation is that after Shakespeare died in 1616, a Jesuit printer in modern-day Belgium changed the preface of a book of poems by the Jesuit (and later Saint, due to martyrdom) Robert Southwell, who had been tortured by Queen Elizabeth's top "priest hunter" before being hung and disemboweled in 1595. The change to the preface was substantial: From "The Author to his loving Cousin" became "To my worthy good cousin Maister W.S.’ from ‘Your loving cousin, R.S."

There is lots of other circumstantial stuff, some of it downright leaps of faith, in a new paper by Andrea Campana, but it is interesting reading.(3)

Why be skeptical? This was just after the time of Queen Elizabeth. Not only did she create the Anglican Church and declare herself the Supreme Governor,(4) she had succeeded the Catholic Queen Mary, who had a bunch of Protestants burned at the stake, and happily returned the favor in various ways. Another Catholic Mary, her first cousin once removed and Queen of Scotland, was imprisoned for 18 years by Elizabeth before being executed. Elizabeth's England was not a good time to be a prominent Catholic and certainly not healthy to be Jesuit, an order that had become quite popular at a time when the conflict between Catholics and Protestants still raged in England.(5)

Good Queen Bess had spies everywhere. That Shakespeare could have secretly been not only Catholic but Jesuit without being tripped up borders on historical fiction.

Was that revised preface instead some political gamesmanship? Perhaps, and historians are prone to taking the bait. Some experts on Shakespeare contend that he was influenced by Southwell's work - everyone influenced Shakespeare, according to some expert on Shakespeare somewhere - and almost anything can be an allegory for something else in culture if you try hard enough, so if you want to believe Shakespeare's works had secret Catholic messages, okay.

Yet any time it requires that much connecting of odd threads, it is better to stick to facts. For example, I have a picture of Bloggy with science journalist Carl Zimmer.(6) If the apocalypse happens tomorrow and all that remains for humans 400 years from now are scraps of information like pictures of a stuffed bear, humanities scholars may claim we are the same person because we have both been seen with Bloggy. Or that I influenced him because we have both written about plant stamen.

“The article, which proposes the Jesuit theologian and controversialist John Floyd (1574-1649) as the editor of the press at St. Omer most likely to have written the dedication, was published amid a flurry of excitement over the recent discovery of a First Folio at the site of the former Jesuit library in St. Omer,” said Campana in a statement. “In combination with the extensive quotation of Shakespearean plays by Floyd in his political writings, even before publication of the plays in some cases, and before the death of Shakespeare, the discovery strengthens arguments not only for the use of Shakespeare’s work for Jesuit instructional purposes but for a real and tangible biographical relationship between the playwright and the Jesuits.”

It's certainly possible that they knew each other - Shakespeare was quite prominent - and he was friends with everyone. Like all great writers, he was voracious in learning new things and incorporating them into his work, but jumping from the idea that other writers quoted Shakespeare, so they were secretly connected, and that his work could be interpreted as being pro-Catholic so he must be a Catholic and perhaps a Jesuit takes a real effort. He could also be considered pro-Jewish, but that did not make him a Jew.

(1) For example, you can not seriously contend he was a Vampire Slayer, though William Shakespeare, Vampire Slayer' would have to be more entertaining than that Abraham Lincoln movie where Abe did the same. We could make Christopher Marlowe his "frenemy" secretly running the Big Vampire paramilitary group that is out to wreck vampire-human relations and that Will wants to prevent. Bill Nighy would have to be involved, since that actor is in apparently every one of those types of movies, a modern day Peter Lorre.

If you're a producer reading this, call me. We'll take a meeting.

(2) This film was Anna Cohen's animated short film final project at Emuna College in Jerusalem, released in July, 2010. It tells the story of William Shakespeare with writers' block, and how his two "friends" (Romeo and Juliet) assist him in overcoming it. The animation was made using two animation techniques: stop-motion and Flash animation.

(3) Like in declaring Babe Ruth the greatest baseball player because he could hit home runs and pitch, I may have my reasons for what I write here, but someone in the humanities, including perhaps the author of the article, will contend I am uninformed and stupid for seeing things with clarity that experts may lack. Be it so, Lysander.

(4) Imagine America had an Archbishop of California and he was appointed by President Obama. Like with the monarchy, Brits don't take religion all that seriously so they do not fret over that the way atheists in America do.

(5) That popularity faded as hostility toward the Pope in specific and Catholics in general became more prominent in the 18th century and lingered ever after. In the 1960 election one of the claims Republicans made is that Senator John F. Kennedy would be taking orders from the Pope - and Papist was something of a slur in heavily Protestant America. They needn't have feared, Democrats easily reconciled Catholicism and governance. Rep. Nancy Pelosi of San Francisco campaigns for reelection almost exclusively on unlimited partial-birth abortion on demand yet takes Catholic communion.

However, being a Jesuit is cool again. In 2013, the Jesuits got their first Pope, Francis.

(6) Carl is too modest to attribute his success to outstanding journalism so he probably gives an appearance with Bloggy more credit than it deserves. Also getting some Bloggy career juju is Jennifer Ouellette and Dr. Kirsten Sanford.