Killer Robots: Debating The Future Of Autonomous Weapons
By The Conversation | April 13th 2015 05:30 AM | Print | E-mail 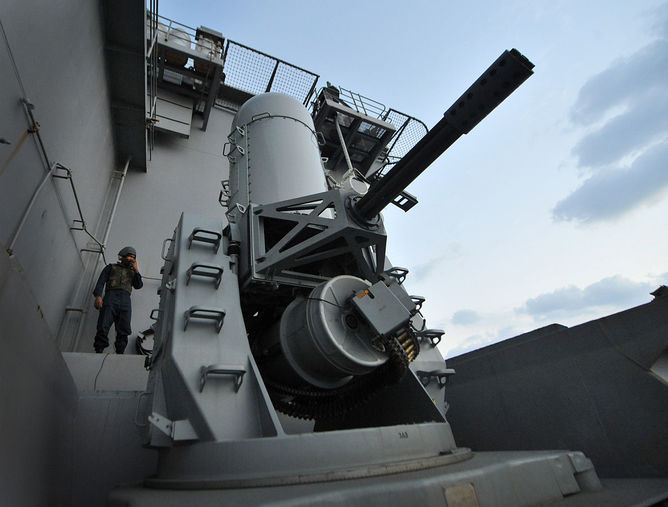 The roles played by autonomous weapons will be discussed at a meeting in Geneva, Switzerland, this week which could have far reaching ramifications for the future of war.

The second Expert Meeting on Lethal Autonomous Weapons Systems (LAWS) will discuss issues surrounding what have been dubbed by some as “killer robots”, and whether they ought to be permitted in some capacity or perhaps banned altogether.

The discussion falls under the purview of the Convention on Certain Conventional Weapons (CCW), which has five protocols already covering non-detectable fragments, mines and booby traps, incendiary weapons, blinding lasers and the explosive remnants of war.

Australia and other parties to the CCW will consider policy questions about LAWS and whether there should be a sixth protocol added to the CCW that would regulate or ban LAWS.

There are generally two broad views on the matter:

The Campaign to Stop Killer Robots (CSKR) argues for a ban on LAWS similar to the ban on blinding lasers in Protocol IV of the CCW and the ban on anti-personnel landmines in the Ottawa Treaty. They argue that killer robots must be stopped before they proliferate and that tasking robots with human destruction is fundamentally immoral.

Others disagree, such as Professor Ron Arkin of Georgia Tech in the US, who argues that robots should be regarded more as the next generation of “smart” bombs.

They are potentially more accurate, more precise, completely focused on the strictures of International Humanitarian Law (IHL) and thus, in theory, preferable even to human war fighters who may panic, seek revenge or just plain stuff up. Malaysian Airlines flight MH17, after all, appears to have been shot down by “meaningful human control”.

Only five nations currently support a ban on LAWS: Cuba, Ecuador, Egypt, Pakistan and the Holy See. None are not known for their cutting edge robotics. Japan and South Korea, by contrast, have big robotics industries. South Korea has already fielded the Samsung SGR-A1 “sentry robots” on its border with North Korea. Not everyone is thrilled about the idea of allowing autonomous weapons systems loose on, or off, the battlefield. Global Panorama/Flickr, CC BY-SA

At the end of last year’s meeting, most nations were non-committal. There were repeated calls for better definitions and more discussions, such as from Sweden, Germany, Russia and China.

Few nations have signed up to the CSKR’s view that “the problem” has to be solved quickly before it is too late. Most diplomats are asking what exactly would they like to ban and why?

The UK government has suggested that existing international humanitarian law provides sufficient regulation. The British interest is that BAE Systems is working on a combat drone called Taranis, which might be equipped with lethal autonomy and replace the Tornado.

LAWS are already regulated by existing International Humanitarian Law. According to the Red Cross, no expert disputes this. LAWS that cannot comply with IHL principles, such as distinction and proportionality are already illegal. LAWS are already required to go through Article 36 review before being fielded, just like any other new weapon.

As a result, the suggestion by the CSKR that swift action is required is not, as yet, gaining diplomatic traction. As their own compilation report shows, most nations have yet to grasp the issue, let alone commit to policy.

The real problem for the CSKR is that a LAWS is a combination of three hard to ban components:

Japan has already indicated it will oppose any ban on “dual-use” components of a LAWS. The problem is that everything in a LAWS is dual-use – the “autonomy” can be civilian, the lethal weapons can be human operated, for example. What has to be regulated or banned is a combination of components, not any one core component.

Close In Weapon Systems already autonomously react to and shoot down incoming missiles without requiring a human to pull the trigger. Stephanie Smith/U.S. Navy

Out of the loop?

The phrase “meaningful human control” has been articulated by numerous diplomats as a desired goal of regulation. There is much talk of humans and “loops” in the LAWS debate:

It could be that a Protocol VI added to the CCW bans “off the loop” LAWS, for example. Although the most widely fielded extant LAWS are “off the loop” weapons such as anti-tank and anti-ship mines that have been legal for decades.

The meeting taking place this week will likely wrestle with these definitions, and it will be interesting to see if any resolution or consensus emerges, and what implications that might have on the future of war.

By Sean Welsh, Doctoral Candidate in Robot Ethics at University of Canterbury. This article was originally published on The Conversation. Read the original article.
The Conversation
More Articles All Articles
About