The first thing iRobot Corporation wants you to know, because they have been asked so many times, is that the Packbot is no Terminator - and never will be.

Robots in the military are not the stuff of science fiction but their mission parameters are very specific - and they are all teleoperated, meaning that there is someone operating the robot from a remote location, perhaps with a joystick and a computer screen.

While this may seem like a caveat in plans to add robots to the military, it is actually very important to keep humans involved in the robotic operations. 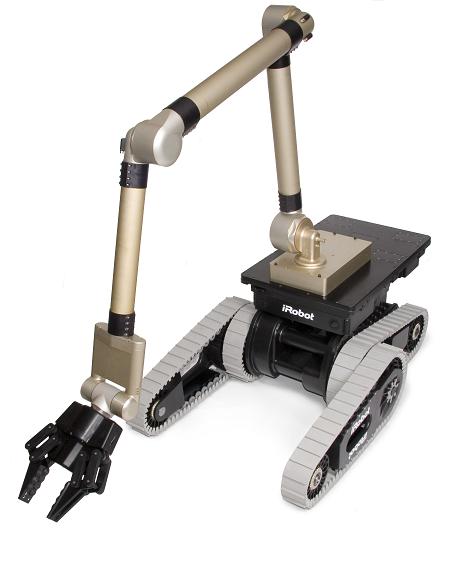 Washington University in St. Louis's Doug Few and Bill Smart are on the cutting edge of this new wave of technology and say that the military goal is to have approximately 30% of the army be robotic forces by somewhere around 2020.

"When the military says 'robot' they mean everything from self-driving trucks up to what you would think of as a robot. You would more accurately call them autonomous systems rather than robots," says Smart, Ph.D., WUSTL assistant professor of computer science and engineering.

And while movies display robots as intelligent beings, Smart and Few aren't necessarily looking for intelligent decision-making in their robots. Instead, they are working to develop improved, "intelligent" functioning of the robot.

"It's oftentimes like the difference between the adverb and noun. You can act intelligently or you can be intelligent. I'm much more interested in the adverb for my robots," says Few.

Few, who is Smart's Ph.D. student, is also interested in the delicate relationship between robot and human. He is working to develop a system in which the robot can carry out a task while keeping a human in the loop and with the ability to create new goals for the robot. Few says that there are many issues that may require "a graceful intervention" by humans and these need to be thought of from the ground up.

"When I envision the future of robots, I always think of the Jetsons," says Few. "George Jetson never sat down at a computer to task Rosie to clean the house. Somehow, they had this local exchange of information. So what we've been working on his how we can use the local environment rather than a computer as a tasking medium to the robot. "

To work toward this goal, Few has incorporated what many would simply consider a toy into robotic programming. Using a Wii controller, Few capitalizes on natural human movements to communicate with the robot. Using something as simple and as common as this video game controller also has added benefits in a military setting. Rather than carting around a heavy laptop and being forced to focus on a joystick and screen, soldiers in battle can stay alert and engaged in their surroundings while performing operations with the robot.

"We forget that when we're controlling robots in the lab it's really pretty safe and no one's trying to kill us," says Smart. "But if you are in a war zone and you're hunched over a laptop, that's not a good place to be. You want to be able to use your eyes in one place and use your hand to control the robot without tying up all of your attention."

Robots are already finding a place among deployed troops. There are unmanned aerial vehicles and ground robots for explosives detection. Robotics advancements do, however, raise new ethical questions, such as where to place the blame if a robot kills someone. Nevertheless, as the technology progresses, more robots are being sent into battle first. The mangled Packbot on display at iRobot is just one such example of a fortunate casualty.

"When I stood there and looked at that Packbot, I realized that if that robot hadn't been there, it would have been some kid," reflects Few.