Could Lyme disease in the U.S. be the result of an accidental release from a secret bioweapons experiment? Could the military have specifically engineered the Lyme disease bacterium to be more insidious and destructive – and then let it somehow escape the lab and spread in nature?

Is this why 300,000 Americans are diagnosed annually with this potentially debilitating disease?

It’s an old conspiracy theory currently enjoying a resurgence with lots of sensational headlines and tweets. Even Congress has ordered that the Pentagon must reveal whether it weaponized ticks.

And it’s not true.

Ticks can indeed carry infectious agents that could be used as biological weapons. Military research has long focused on ticks. Sites around Long Island Sound, near the military’s Plum Island research lab, were some of the first places where the American Lyme disease epidemic was identified.

But there was no release of the Lyme disease agent or any other onto American soil, accidental or otherwise, by the military.

I started working on Lyme disease in 1985. As part of my doctoral thesis, I investigated whether museum specimens of ticks and mice contained evidence of infection with the bacterial agent of Lyme disease prior to the first known American human cases in the mid 1970s.

So decades before Lyme was identified – and before military scientists could have altered or weaponized it – the bacterium that causes it was living in the wild. That alone is proof that the conspiracy theory is wrong. But there are plenty of other lines of evidence that show why Lyme disease did not require the human hand changing something Mother Nature had nurtured. 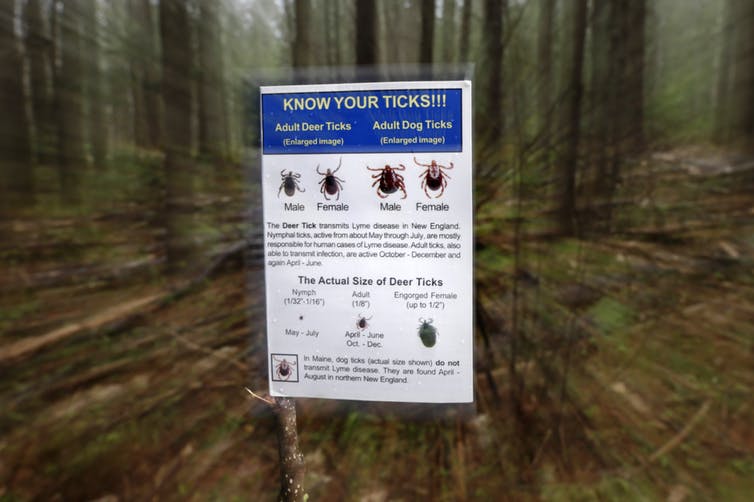 Ticks and the diseases they spread can do just fine without being altered in the lab as weapons. AP Photo/Robert F. Bukaty

Lyme is an unlikely bioweapon

I teach a graduate course in biodefense. Biowarfare, the use of biological agents to cause harm, was once an interest of the U.S. military and that of many other countries.

One of the most important characteristics of a biowarfare agent is its ability to quickly disable target soldiers. The bacteria that cause Lyme disease are not in this category.

Lyme disease does make some people very sick but many have just a flu-like illness that their immune system fends off. Untreated cases may subsequently develop arthritis or neurological issues. The disease is rarely lethal. Lyme has a weeklong incubation period – too slow for an effective bioweapon.

And, even though European physicians had described cases of Lyme disease in the first half of the 20th century, the cause had not been identified. There was no way the military could have manipulated it because they did not know what “it” was. None of us knew – until 1981, when the late Willy Burgdorfer, a medical entomologist, made his serendipitous discovery.

Burgdorfer’s discovery of the Lyme bacterium

Burgdorfer had done his graduate studies in Switzerland in the late 1940s, investigating the biology of tick-borne relapsing fever, a bacterial disease that can spread from animals to people. During the course of that work, he developed new methods to detect infection in ticks and to infect ticks with specific doses of a pathogen. Those methods are still used today by people like me.

Eventually, Burgdorfer moved to the Rocky Mountain Laboratories in Montana, an outpost of the U.S. Public Health Service and National Institutes of Health – at the time, the world center for tick research

Burgdorfer’s unique expertise was studying how microbial agents were adapted to the internal tissues of their tick hosts, using experimental infections and microscopy. Until Lyme disease came along, his reputation was as the world’s expert on the life cycle of Rocky Mountain spotted fever (RMSF). 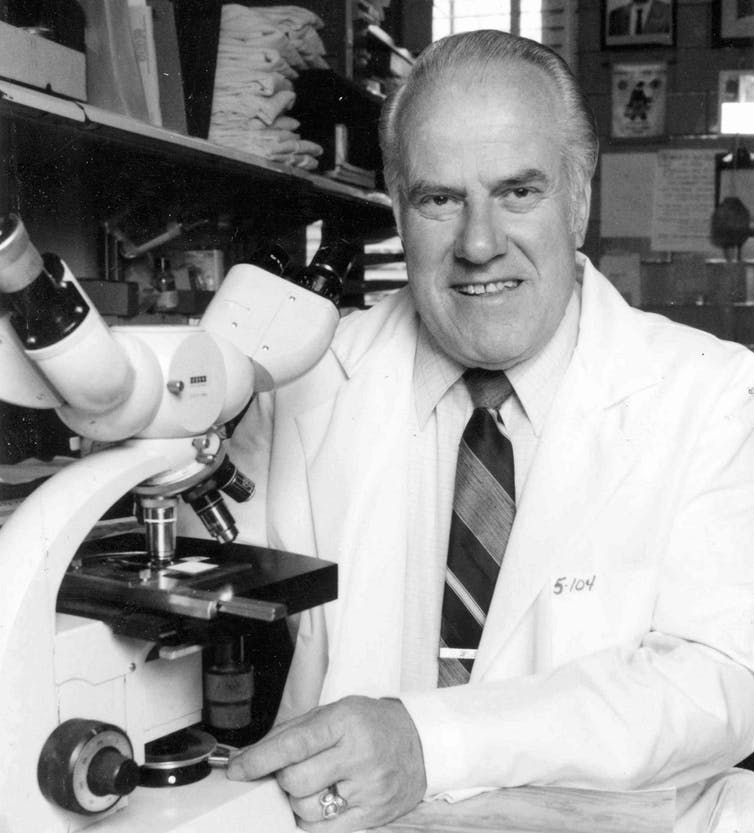 Burgdorfer at the microscope. NIH, CC BY

It was RMSF that led Burgdorfer to the cause of Lyme disease. He had been working to better understand RMSF on Long Island in New York. Why were dog ticks, the acknowledged vector, uninfected even in areas where people were getting sick? He knew that a new tick, the deer tick, had recently become common on Long Island and been incriminated as a disease vector.

So Burgdorfer asked his colleague Jorge Benach at Stony Brook University for some deer ticks to test for the presence of RMSF bacteria. Benach happened to have some from nearby Shelter Island that he sent along.

In testing the “blood” of the deer ticks, Burgdorfer did not find RMSF bacteria. But he did find spiral-shaped bacteria called spirochetes. The spirochetes were very similar to what he had studied as a graduate student: the cause of relapsing fever. If spirochetes caused relapsing fever, perhaps other spirochetes were responsible for the mysterious new Lyme arthritis for which a cause was not known.

This ah-ha moment led to the landmark 1982 paper in Science with a question for a title: “Lyme disease – a tick-borne spirochetosis?”

Some have overanalyzed the fact that Lyme disease spirochetes were first found in ticks from New York’s Shelter Island, right next to Plum Island, an isolated facility used as a military research lab until 1954.

But it was just a coincidence that Benach’s Shelter Island ticks were the ones in which Burgdorfer made his serendipitous finding. By 1984, once researchers knew what to look for, Lyme disease spirochetes were found in ticks from coastal Connecticut, New Jersey and even California. 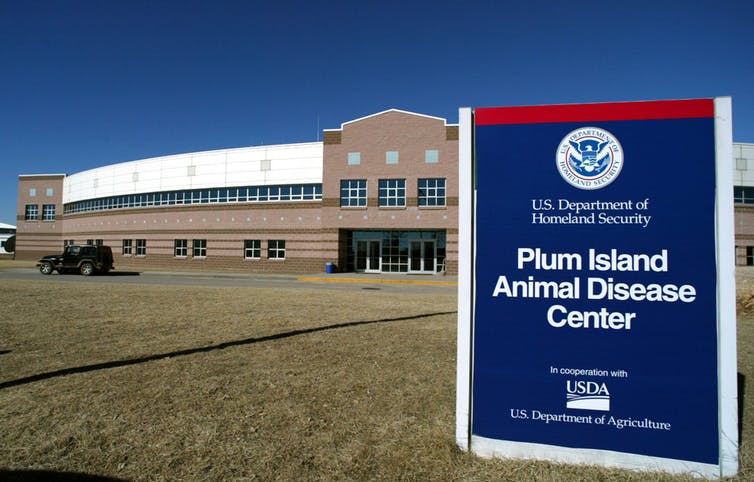 The research center on Plum Island focuses on animal diseases that could damage the agroeconomy. AP Photo/Ed Betz

But let’s pretend the military started working immediately on the newly found agent of Lyme disease in 1981. That’s long after Fort Terry on Plum Island was repurposed in 1954 by the U.S. Department of Agriculture to study exotic animal diseases. It’s also after President Richard Nixon outlawed biowarfare research in 1969. If the bacteria was manipulated, it had to have been done after 1981 – so the conspiracy theory’s timeline just doesn’t work.

The real nail in the coffin for the idea that Lyme disease in the U.S. was somehow accidentally released from military bioweapons research is to be found in the fact that the first American case of Lyme disease turns out not to have been from Old Lyme, Connecticut, in the early 1970s. In 1969, a physician identified a case in Spooner, Wisconsin, in a patient who had never traveled out of that area. And Lyme disease was found infecting people in 1978 in northern California.

How could an accidental release take place over three distant locations? It couldn’t.

Population genetics research on Borrelia burgdorferi, the bacterial agent of Lyme disease, suggest that the northeastern, Midwestern and Californian bacteria are separated by geographical barriers that prevent these populations from mixing. Had there been a lab strain, particularly one engineered to be more transmissible, that escaped within the last 50 years, there would be greater genetic similarity between these three geographic populations. There is no evidence for a recent single source – such as a release from a lab – for Lyme disease spirochetes.

The real reasons for the epidemic becoming so burdensome include reforestation, suburbanization and a failure to manage deer herds.

Conspiracy thinkers make much of the military’s interest in tick-borne infections and how it influenced top researchers. Until Lyme disease came along, the number of tick laboratories in the world could be counted on both hands. As an acknowledged expert on ticks and the infections they transmit, it’s surely possible that Willy Burgdorfer received funding from the military, undertook studies for them, or was consulted by them. They were one of the few sources of research funds for tick projects in the period from 1950 to 1980. The overarching goal of such applied work would have been understanding the tick-related risks American soldiers faced while deployed, and how to protect them.

That Burgdorfer alluded to biowarfare or biodefense programs in interviews toward the end of his life should not be construed as an admission of participation in top-secret work. I met Burgdorfer several times and was struck by his wry sense of humor. It’s my guess that his hints that there was a bigger story to what he did for the military was a prankster’s way to toy with the interviewer.

As someone who has worked for more than three decades to understand the epidemiology and ecology of Lyme disease in order to reduce the risk of Americans getting infected, I am appalled that this conspiracy theory is taken so seriously that Congress is now involved. The idea that Lyme disease is due to bioweapons research gone wrong is easily disproven. Our legislators could better spend their time fighting for efforts to prevent disease instead of investigating a far-fetched story that’s based on misinterpretation and innuendo.

By Sam Telford, Professor of Infectious Disease and Global Health, Tufts University. This article is republished from The Conversation under a Creative Commons license. Read the original article.