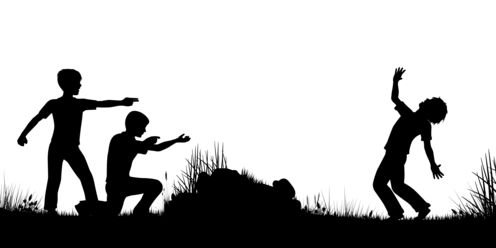 Violent rhetoric appeals to disaffected young men because it gives them a challenge to express aggression as 'proof' of manhood. Credit: Sillouetted children playing as soldiers/Shutterstock

Is this a view of masculinity that merely happens to be violent? Or does masculinity actively underwrite and sustain extremist movements?

The paradox is that while the world sees extremism as dangerously anti-social, the men themselves appear to see it as a profound social duty.

They exhibit dogmatic conformity to group social norms, they see an opportunity for masculine notoriety and to have a risky “boy’s own” adventure. Above all, they see it as the ultimate demonstration of manhood.

Understanding how this occurs should be a top priority - especially how young boys go down the path of terror - because this understanding ultimately paves the way for interventions, de-escalation and peace.

Where do these images come from?

A number of alternative explanations exist for the prominence of hyper-masculine imagery in reports of terrorism. The imagery may well reflect Western media biases and serve the propaganda purposes of Western governments. That is to say, the reports largely speak to Western cultural viewpoints and political agendas.

While this may well be the case, there is clearly much more to the story.It is also possible that hyper-masculinity is a side-effect of the posturing of war. But this merely reinforces the view that masculinity is indeed a potent force at work here.

The lure of self-transformation

In addition to obvious hyper-masculine imagery, three other features strike a chord with my own research:

First is the youth of the recruits, including many teenagers.

Second is the transformation from quiet kid into terrorist warrior – think “lone wolf”.

Third is the way that young men identify with a cause and affiliate with extremist groups.

These features – young male, group identification, transformation into warrior - have much in common with, and should draw our attention to, the more familiar rites of passage that mark the transition from childhood to manhood. The Sun Vow by Herman Atkins McNeil shows a young Native American boy undergoing a manhood ritual under the eye of an older warrior. Peter Roan/Flickr, CC BY

The transition from boyhood to manhood is a crucial time in boys’ lives. Becoming a man is the ultimate social endorsement and personal accomplishment.

Most boys apply themselves to the task without question. In part, this is because the change seems so normal and because they rightly sense that failure is associated with some of the deepest social taboos of all.

Most cultures, including those in the West, have limited tolerance for members who “deviate” from accepted gender norms. For all intents and purposes becoming a man is compulsory.

Many pathways to manhood

For most, becoming a man seems natural, probably because it appears to stem from the biological changes of puberty. But there are actually many pathways to manhood and many possible outcomes. The natural “feel” is deceptive.

There is plenty of research that shows that masculinity is highly variable and above all is a social achievement, which is largely independent of biology. The Boy Scouts is one way many Western countries have imparted masculine ideals to boys. Click to see more details. Freeparking/Flickr, CC BY

Different societies define manhood very differently: they define what a “real man” is, set the standards that boys ought to aspire to, and orchestrate the transition to manhood through a variety of mechanisms.

Indeed, becoming a man is potentially so variable that anthropologist David Gilmore reminds us that:

Boys have to be encouraged, sometimes actually forced, by social sanctions to undertake efforts toward a culturally defined manhood, which by themselves they might not do.

Traditional societies seem to have addressed the uncertainties in the transition to manhood by developing initiation rituals to guide young men through. These rituals typically entail some form of risky challenge, which boys use to prove their manhood and to earn the right to be called a man.

The boys always underwent initiation under the guidance of older mentors and in the company of their peers. The rituals served to make the transition orderly, meaningful and invested it with shared social purpose.

Modern-day social change has witnessed a decline in all but the most basic rites of passage. Yet becoming a man is as important as always, and the transition to manhood remains very challenging.

This raises the question: how do boys navigate the transition now? I argue that many boys now invent their own rites of passage.

Research in the West Indies showed that social change has led to a loss of older mentors from boys’ lives due to long working hours and commuting times, fewer men in teaching, suspicion about men in youth clubs, changing family structures and so on.

These shifts have left a power vacuum that is vulnerable to exploitation. Boys are spending more time in the sole company of their peers: on street corners, in shopping malls and in their cars.

Instead of growing up with the role models and standards of older, more experienced men, most of their role modelling comes from peer groups. In the absence of alternatives, these groups resort to raw physical masculinity as the yardstick for what masculinity should look like, how boys should behave and who should dominate.

They also develop their own rituals to admit members, some of which are extreme, anti-social and high-risk. It is a willingness to take risks that is considered the hallmark of a “real man”.

So how does this relate to terror? Hypermasculine imagery is prominent in the media. Terror recruits are young, group-affiliated and primed to take risks. They are supposedly disaffected and therefore susceptible to mentoring by like-minded peers and older men, whose motives differ from those of their parents and community.

There are key similarities with classic rites of passage and key parallels with my own work on masculinity elsewhere. The social pressures and events around the transition to manhood are especially susceptible to exploitation.

It is difficult not to conclude that masculinity is a key force that underwrites and sustains extremism. In terrorism, we are witnessing a very specific configuration of the passage to manhood.

David Plummer, Professor of Population Health at Griffith University, does not work for, consult to, own shares in or receive funding from any company or organization that would benefit from this article, and has no relevant affiliations.