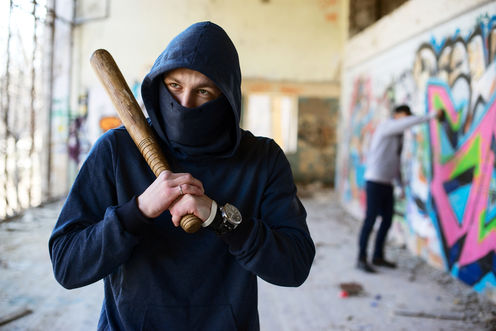 For many years, scientists have believed that there is a connection between severe antisocial behavior and abnormal brain development. But there has been very little research testing this idea.

We scanned the brains of 58 young people (aged 16 to 21) with conduct disorder and 25 healthy controls in the same age range. We used the scans to measure the thickness of 68 different parts of the outer layer of the brain (the cortex) – which plays a role in areas such as awareness, perception, attention, memory and language among other things. We then measured the degree of similarity between these different regions of the cortex.

This measure of similarity tells us something about whether different areas of the cortex develop at similar rates (suggesting that they “grow together” – which might indicate that they work together and are functionally connected) or alternatively, whether they develop at very different rates (which would suggest that they have different functions). We expected to find that the young people with conduct disorder would show the latter, so less similarity between the thickness of different parts of the cortex than the healthy controls.

We found that different parts of the cortex were much more similar to each other in terms of thickness in the teenagers who had developed behavior problems early in life compared with healthy controls. This suggests that brain development proceeds in a more synchronized way in children with early-starting behavior problems. It could mean that their brains are less specialized, whereas in typically developing children, parts of the cortex that are close to each other develop at similar rates while others that are further away from each other, or that have different functions, develop at different rates – meaning their brains are more specialized into different networks with different functions. But we don’t know how specialism specifically relates to antisocial behavior. Another thing that surprised us was the extent of the structural changes. Rather than finding differences between the groups (antisocial versus healthy controls) in very specific parts of the brain that have previously been linked to antisocial behavior – such as the frontal cortex – we found widespread changes across virtually the whole cortex.

However, we also found a very different pattern of changes in thickness in the teenagers who had developed behavior problems in adolescence (the “late starters”). Different parts of their cortex were even less similar to each other compared with the typically developing teenagers. Again, this was a widespread pattern affecting many different parts of the brain, rather than just one or two specific regions. This finding might reflect changes in brain development that occur specifically during adolescence. For example, brain regions that normally develop in late childhood or adolescence might develop more slowly in this group compared with healthy controls.

These results provide some of the strongest evidence to date that abnormalities in brain development may contribute to the development of serious antisocial behavior in childhood or the teenage years. They also suggest that there are important differences in brain structure between those who develop behavior problems early in life and those who go “off the rails” in their teenage years.

Studies that track changes in brain development and antisocial behavior over time are needed to study whether the person’s behavior improves if the development of their brain becomes more normal. They also need to examine whether the person’s behavior becomes worse if the development of their brain becomes more abnormal. And the method that we used to study the “wiring map” of the brain could also be used in the future to study the impact of psychological or drug therapies, or early interventions, targeting high risk children – such as the younger siblings of young offenders – before they develop serious behavior problems.

By Graeme Fairchild, Associate professor, University of Southampton. This article was originally published on The Conversation. Read the original article. Top image: Shutterstock.com