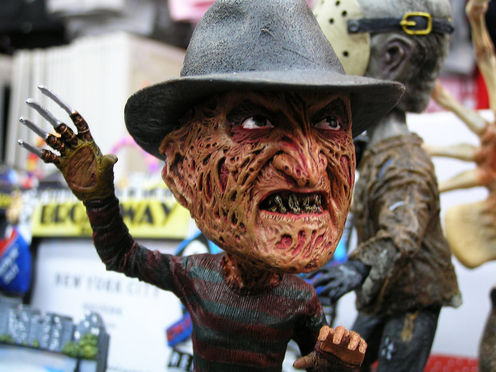 Children and adults alike are digging out those spooky costumes ready for a celebration.

We’ve reached that time of year again: Halloween. October 31 is dedicated to remembering the dead.

We’ve all experienced fear, but Halloween is the particular time of year when we look for that rush that usually accompanies feeling scared. Are you in need of a “scare-specialist” for this year’s Halloween celebrations? Then you need not look further than your very own brain.

Perhaps you’ll be spending Halloween watching A Nightmare on Elm Street with your hands over your eyes? Or maybe you’d rather wander around a haunted house waiting for ghouls and critters to pop out of unseen annexes?

Whatever your tastes may be, when faced with such spine-tingling situations your brain enters into fight-or-flight mode. This mode is a primitive survival mechanism in which your body undergoes a stress response to a perceived threat in your surrounding environment.

While this reaction originally developed to help our ancestors circumvent predators in a world filled with danger, it is more common today for us to experience such feelings in response to mental threats. Mental threats are threats which are unlikely to harm us physically, but those which are more likely to cause some psychological distress.

The fight-or-flight response is handled by your amygdala – the part of your brain involved in the experience of emotion. This ancient brain system is an integral part of fear processing, but it is unable to distinguish between a physical or a mental threat. So while sweaty palms and anxiety may make more sense in the presence of a hungry bear, they also manifest in undesirable scenarios such as during job interviews or scary films.

There is plenty of evidence to support the involvement of the amygdala with fear processing. Impressively, when this brain region was completely removed in rats they no longer displayed fearful or avoidance behaviors towards their sworn mortal enemy – the cat.

So when that creepy atmospheric music in your horror movie starts to get louder and louder, and the sudden appearance of the masked murderer makes you jump, this will act as a stimulus which will trigger a signal in your amygdala. In response to a perceived threat, it releases a brain chemical called glutamate, which acts on two other regions of your brain.

The first signal is sent deep into the base of the brain, into an area called the mid-brain, which we have little control over. This makes us freeze or involuntarily jump, which isn’t great if you’ve got a box of popcorn in your lap.

Feel the dopamine kicking in yet?

The second signal is sent to the hypothalamus, a section of the brain responsible for producing hormones. The hypothalamus triggers our autonomic nervous system – which is how our fight or flight instinct starts to kick in. The heart rate and blood pressure go up, and adrenaline and dopamine (the brain’s “reward hormone”) are pumped throughout the body.

This helps our bodies to prepare for deadly combat or for the run of our lives, and it is why you feel such a rush whenever you’re scared.

Some people actually enjoy these experiences of fear and the accompanying rush more than others. Perhaps you’re one of those individuals who watches terrifying films throughout the year or seeks out extreme sports or risky activities.

There is emerging evidence that our underlying brain chemistry may also be responsible for individual differences in the enjoyment of being afraid. David Zald and colleagues from Vanderbilt University showed that people differed in their chemical responses to thrilling situations.

We know that dopamine is released in response to scary and thrilling situations, but in those who reported enjoying such terrifying situations, their brain lacks a “brake” on the dopamine release and re-uptake in the brain. This means that they experience more pleasure and reward in spooky or risky situations from even higher levels of dopamine in the brain. While some of you may cower at the mere mention of Freddy Krueger, others will feel the bubbles of excitement beginning to brew.

So if you get your kicks from ghoulies and ghosties and long-legged beasties and things that go bump in the night, this is probably why.

Kira Shaw, PhD Researcher in Neuroscience at University of Sheffield, is one of the Sheffield NeuroGirls @Shef_NeuroGirls. This article was originally published on The Conversation. Read the original article.