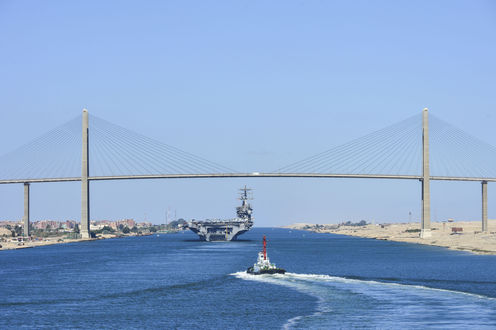 For a month or two every summer, beaches across the south-eastern Mediterranean might be packed but the inviting seas remain suspiciously empty. It’s jellyfish season, and the “nomads” are out in force. Bathers avoid the sea while the swarm is offshore; their stings are painful and may last weeks, and one is likely to feel a burning sensation even without touching the creature.

Yet the nomad jellyfish (Rhopilema nomadica) is but one of more than 350 marine invasive alien species that have traversed the Suez Canal from the Red Sea into the Mediterranean.

People long dreamed of joining the two seas, and these ideas gained force as Europe’s maritime trade with the East became increasingly profitable. Indeed, one of Napoleon’s aims in his Egyptian campaign was to “…cut the Isthmus of Suez … for the French Republic”.

In 1854 the French vice-consul to Egypt, Ferdinand de Lesseps, was given the go-ahead. Private investors in France put up half the capital needed and much of the rest was invested by Egypt’s ruler, Mohammed Said, who also supplied the bulk of the workforce – 20,000 conscripted fellahin (peasants) and prisoners.

That canal, completed in 1869, was 8 meters deep, 58-90 meters wide and 160 kilometers long. The canal was deepened and widened several times until it reached its present size: 24 meters deep and 313 meters wide.

A corridor for invasion

The Suez Canal is now one of the primary pathways for invasions by alien marine species globally – and its impact on the Mediterranean has been particularly harmful.

The invasion was foretold. Even before the original Suez Canal was excavated Leon Vaillant, a French zoologist, argued that the canal would allow organisms to “emigrate”. He called for a survey of the pre-canal ecosystem – what today would be considered a “baseline study”. That never took place. The nomad finds a new home. Bella Galil, CC BY

The silver-cheeked toadfish (Lagocephalus sceleratus), a poisonous pufferfish from the Indo-Pacific Ocean, has become highly abundant in fishing catches right across the Mediterranean over the past decade and has now made it as far as Crimea. It poses severe health hazards: between 2005 and 2008, 13 people were treated for poisoning in Israel alone and hospitalizations occurred in Egypt, Lebanon, Cyprus, Turkey and Greece.

Alien invasive rabbitfish have created extensive barren areas along rocky shores. They’re algae-eaters with few competitors. Their overgrazing has dramatically reduced the habitat available for other creatures, with knock-on effects right through the food web.

In August this year Egypt announced plans to further enlarge the Suez Canal, doubling its capacity by creating a new waterway parallel to the current channel. This should mean more invasions from the Red Sea. The Mediterranean is a sensitive and unusual environment – a sea full of unique wildlife. Therefore risky projects of this magnitude must, at minimum, be subject to a transparent and scientifically sound Environmental Impact Assessment (EIA) and risk analysis.

This in turn should lead to control and mitigation measures. One of the possible choices may be the introduction of locks and a salinity barrier – the original Suez Canal passed through a highly salty artificial lake which kept some organisms from crossing. Yet the publicly available information on the enlargement of the canal makes no reference to an EIA.

Marine biologists are apprehensive, and a group of 18 of us have expressed our concerns in the journal Biological Invasions. We fear an increased influx of additional marine invasions in the Mediterranean Sea.

We recognize Suez enlargement is inevitable, as global trade and shipping are vital to society. Yet the existing international agreements also urge for sustainable shipping that minimises unwanted impacts and long term consequences. There are means available to limit the introduction of invasive species, which can be carried out at the early stages of a project but which become increasingly expensive as the project progresses.

The ecological and economic cost of inaction may be substantial, potentially leading to irreparable, large-scale ecosystem damage.