Newspapers are currently reporting a surge in jellyfish numbers in the Mediterranean.

Along with the surge in jellyfish numbers, or bloom, is a surge in bad reporting about global warming.  This is one occasion when I am on the side of the 'natural cycles' folks: jellyfish have a 20 year boom and bust natural cycle.

For the record: I am convinced that global warming is a reality and that we humans are causing it.  There are many strange events which appear very likely to be caused by our profligate use of fossil fuels, but I do not count surges in jellyfish numbers among those events.  Global warming may be a contributory factor in some cases of jellyfish blooms, but it is in the nature of jellyfish to bloom.  Every economist should study the jellyfish: while not quite so cuddly as lemmings, they are the very model of a boom and bust economy. 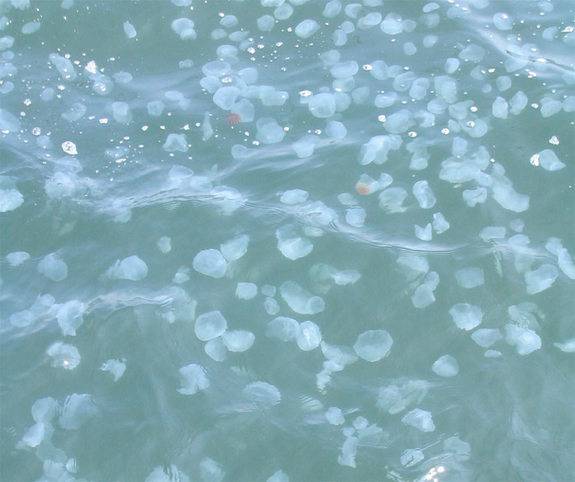 I well remember back in the late 1950s that we were being warned by our school teachers about the dangers of the Portuguese man o' war.  These 'jellyfish' were being seen in large numbers in the Thames Estuary.  Although they are not really jellyfish they still are subject to boom and bust cycles - and the vagaries of winds and ocean currents.  Such a bloom was reported last year by the Telegraph:

Surge in number of men o'war being washed up on beaches
Beachgoers and surfers are being warned of a surge in the number of deadly Portuguese men o’war off the coast of British beaches.

The creatures, which resemble jellyfish but are in fact a colonial organism known as siphonophores, can inflict a severe and painful sting which in some cases can be fatal.

They have been appearing in increasing numbers on beaches in south-west England, Wales and Ireland. There have even been reports of a man o’war being washed up as far north as the Isle of Man.

According to the Marine Conservation Society their increasing numbers on British beaches has been caused by global warming and a rise in sea temperatures.

I must ask the Marine Conservation Society: if the 2012 bloom was caused by global warming, what, then, was the cause of the bloom which I remember from my childhood?  And the 2003 bloom ?

I spend many happy weekends sailing, walking by the sea and bird watching. Some of the most memorable events of last summer were the tens of thousands of jellyfish swimming up the Torridge estuary.
Baroness Miller of Chilthorne Domer, Lords Hansard, December 13 2004

From time to time there are jellyfish - and siphonophore - blooms around the shores of the U.K.  Jellyfish are so widely known to the people of these islands that the term 'jellyfish' is used as a metaphor for someone who is said to be spineless.  One might almost track the blooms by the frequency with which Members of Parliament use the term 'jellyfish' as an insult.

Even the day-to-day running of the White Fish Authority is classified information, jealously guarded by some faceless jellyfish who scrabbles away in a Whitehall office waiting for his inflation-proof pension to become due. I want to know what he is up to. I share the view of Stanley Baldwin, who said that power without responsibility was the prerogative of the harlot.

What does science say about jellyfish blooms ?

Wikipedia has a quite accurate entry on jellyfish blooms:

Jellyfish bloom formation is a complex process that depends on ocean currents, nutrients, sunshine, temperature, season, prey availability, reduced predation and oxygen concentrations. Ocean currents tend to congregate jellyfish into large swarms or "blooms", consisting of hundreds or thousands of individuals. Blooms can also result from unusually high populations in some years. Jellyfish are better able to survive in nutrient-rich, oxygen-poor water than competitors, and thus can feast on plankton without competition. Jellyfish may also benefit from saltier waters, as saltier waters contain more iodine, which is necessary for polyps to turn into jellyfish. Rising sea temperatures caused by climate change may also contribute to jellyfish blooms, because many species of jellyfish are relatively better able to survive in warmer waters...

Given the simple fact that jellyfish blooms have been reported at many times and places, one is entitled to ask if there is some natural cycle at work.  This does indeed appear to be the case.

Though some reports suggest jellyfish are taking over the world’s oceans, long-term records of these gelatinous animals fail to show a global increase in jellyfish blooms likely caused by pollution, warming, coastal development and other human influences.

While the analysis of a team of researchers who have pulled together records of jellyfish presence going back to the 19th century don’t support a rising gelatinous menace, the team did find a surprise: roughly 20-year cycles in the abundance of jellies.
...
A number of research papers have suggested that not only are blooms increasing on a global scale, but humans are likely responsible, because humans alter the oceans in ways that favor jellyfish.

However, others have maintained information on jellyfish populations just isn't sufficient to draw such conclusions.

This most recent study drew upon 37 datasets, each of which included at least 10 years of records of jellyfish presence in an area.

Even though the records don't evenly represent the ocean — the majority came from the Northern Hemisphere, particularly in the Atlantic Ocean and the Mediterranean Sea — they include all available annual measurements, including datasets used to support work indicating increases in jellyfish, the authors write in a study published online today (Dec. 31) in the journal Proceedings of the National Academy of Sciences.
LiveScience, December 2012

A recent publication contains a wealth of information about jellyfish blooms:

Review of jellyfish blooms in the Mediterranean and Black Sea

Gelatinous plankton is formed by representatives of Cnidaria (true jellyfish), Ctenophora (comb jellies) and Tunicata (salps). The life cycles of gelatinous plankters are conducive to bloom events, with huge populations that are occasionally built up whenever conditions are favorable. Such events have been known since ancient times and are part of the normal functioning of the oceans. In the last decade, however, the media are reporting on an increasingly high number of gelatinous plankton blooms. The reasons for these reports is that thousands of tourists are stung, fisheries are harmed or even impaired by jellyfish that eat fish eggs and larvae, coastal plants are stopped by gelatinous masses. The scientific literature seldom reports on these events, so time is ripe to cope with this mismatch between what is happening and what is being studied.

I recommend the above pdf to my readers: it will equip them to deal with bad reporting about jellyfish and global warming.
.
The Chatter Box
More Articles All Articles
About