Supertranslations And Eternal Ghosts: Black Holes No Closer To Being Understood
By The Conversation | August 31st 2015 07:59 AM | Print | E-mail 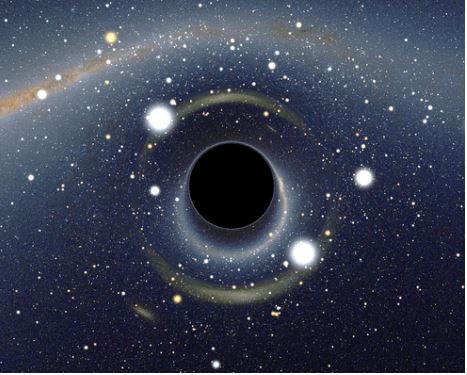 Stephen Hawking said something! And again the international media is all a'buzz.

The physics community is a little more muted, but after hearing the pronouncements of the famous theoretical physicist, of supertranslations and horizons, like those listening to Douglas Adams’s Deep Thought, you might be wondering what the actual question is.

We don’t have to go far, as a little over a year ago I wrote about Hawking’s previous proposed solution to the same problem, namely the paradox of information and black holes.

All about the information

As a quick reminder, the core issue is the apparent forgetfulness of black holes. Black holes can swallow anything that comes too close, squashing all matter into the apparently point-like singularity on the way.

Only a few properties of the infalling material are remembered, imprinted on the black hole’s gravitational field, namely the mass, the charge and the angular momentum. All other properties appear to be promptly forgotten; neglecting spin and charge, all black holes of the same mass are identical, whether they were built of collapsing stars or from an immense number of tennis balls.

This “no hair” of black holes, telling us that they can only remember the mass, spin and charge of infalling objects, has been known for half a century.

But as I noted previously, the other pillar of modern science, quantum mechanics, cares deeply about information, and to lose information is not simply careless, it’s downright forbidden. And somehow black holes should remember the quantum details of all the material that ever fell in.

This is especially important given Hawking’s key insight into black holes, namely that they can evaporate, leaking a feeble radiation due to quantum mechanical interactions in their vicinity. This featureless radiation robs a black hole of mass, diminishing its gravitational field until it vanishes in a final puff.

But after it has completely evaporated, where did all that quantum information go? The potential solutions and counter solutions to this have given us the black hole wars, where theoretical researchers have argued about different ways that information could escape.

Hawking’s latest pronouncement is the next salvo in the war, changing his view that the information is somehow stored and is eventually released when the black hole is in the final stage of evaporation.

The new solution involves supertranslations, something that I have yet to get my head properly around. But it seems to rely on the well known fact that an “image” of infalling matter seems to get imprinted onto the “surface” of a black hole.

A quick explanation. Imagine you drop a green iguana into a black hole (no iguanas were hurt during the writing of this article). Initially, as you watch, you see the iguana happily wriggling about as it falls.

But as it gets closer, the light reaching your eyes has had to struggle out of the ever increasing gravitational field. This struggle has robbed the light of some energy and the iguana starts to change colour, from green to red.

Due to the effects of relativity, the strong gravitational field also influences clock rates, and the iguana’s wriggling slows.

As it continues to fall, the effects of relativity grow, and eventually it crosses a point of no return, the Event Horizon, and any light from the iguana is also destined to head towards the black hole centre.

But just before it crossed the Event Horizon, there was the last light from the iguana’s skin. This light is heading outwards at the speed of light, but is held in place by the immense gravity. This last light remains as a final image of the infalling iguana, an iguana that no longer exists.

There’s the information, sort of

Back to Hawking! It seems that such images can be treated as records of all of the things that fell in, a record of their quantum information (I am waving my hands a little as I type this). And this information gets encoded into the radiation leaking from the black hole, steadily carrying it away as it evaporates.

The process, however, seems to scramble the radiation, making it effectively useless (meaning an awful lot of detective work is required to piece together the details of what actually fell in). The information is seemingly saved and lost at the same time! Paradox solved.

Is this the last shot in the Black Hole wars? I seriously doubt it. This is an idea, one of many, that has been proposed, and a paper detailing the actual process has yet to appear.

When it does, it will be digested by the community of researchers working in this seemingly esoteric corner of physics, and arguments and counterarguments are likely to fly. There will be talks at conferences, discussions over coffee, and arguments in corridors, the usual way that science proceeds.

But the general public is unlikely to hear anything until we have our next “Hawking says something” story.

Geraint Lewis is Professor of Astrophysics at University of Sydney. This article was originally published on The Conversation. Read the original article. Top image: Wikimedia/Alain r, CC BY-SA