The aviation industry is a major source of greenhouse gas emissions. In 2011 aviation contributed around 3% of Australia’s emissions. Despite improvements in efficiency, global aviation emissions are expected to grow 70% by 2020 from 2005. While the industry is seeking new renewable fuel sources, growing biofuels takes up valuable land and water that could be otherwise used to grow food.

But what if you could grow biofuels on land nobody wants, using just seawater and sunlight, and produce food at the same time?

That’s just what a new project in Abu Dhabi is seeking to do. The Integrated Seawater Energy and Agriculture System, or ISEAS, will grow sustainable food and aviation fuel in the desert, using seawater and sunshine, in a way that is eminently transferable to similar arid regions around the world.

The project was announced in January 2015 and is now under construction.

So, how does the project solve the biggest environmental problems?

Energy, water and food problems frequently compound each other, each making the others more difficult to resolve.

Examples abound: think of wasteful irrigation coming up against water limits and threatening reductions in food production. But there are some projects that turn the issue around and bring water, energy and food issues into positive relations, each strengthening the others.

One example of this is the Sundrop Farms project in South Australia, on which I previously wrote on The Conversation, where abundant sunshine and seawater are used to produce electric power and fresh water to cultivate greenhouse crops like tomatoes.

The Sundrop Farms project is moving ahead, and has won substantial financial support from the global venture capital firm KKR in addition to its earlier support from the Clean Energy Finance Corporation, as well as a contract to supply fresh produce to supermarket chain Coles over the next ten years.

The Abu Dhabi project is even more ambitious and is called “seawater farming”. It involves the use of salt-tolerant plants like mangroves and the oil-rich Salicornia as well as aquaculture of seafood such as shrimps and fish.

Salicornia is a salt-loving plant that doesn’t mind getting wet. Cristiano Cani/Flickr, CC BY

The project was developed through the Sustainable Bioenergy Research Consortium in Abu Dhabi. It involves as partners the airline Etihad Airways, the Masdar Institute of Science and Technology (from the UAE), as well as corporate giants Boeing, General Electric and UOP Honeywell. These corporations provide the funding and a potentially (vast) market.

The idea is to rapidly scale up various options for securing the biomass and complementing it with associated activities to generate a closed loop operation.

First, seawater is used in aquaculture ponds, where (2) fish and/or shrimp varieties can be grown (= food). Then (3) the wastewater from the aquaculture, which is rich in organic nutrients, is used to irrigate a salt-tolerant crop of Salicornia.

This crop is harvested (4) and the oil extracted from the seeds (= aviation biofuel). Water is then drained from the salt-tolerant crops (5) and fed into a mangrove wetland, where it is naturally purified and carbon can be sequestered (6).

Outside this sequence there is solar energy input to drive the crop production and energy production needed for pumping.

A chart of the process is shown here: 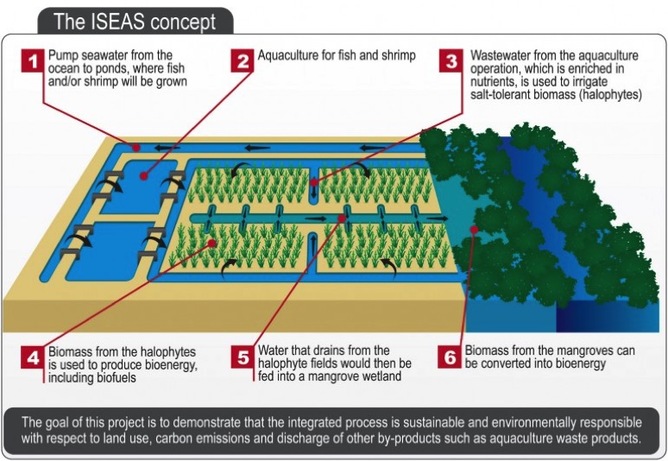 The project solves the problem of waste disposal with fish farming (aquaculture) by channeling the organic wastes as irrigation to act as fertilizer for the cultivation of the Salicornia plants. The Salicornia plants themselves (known as halophytes, or salt-resistant species) need only the seawater and grow on arid land.

The project eliminates the problem with most biofuels that they are perceived as taking away water and arable land that could be used for food production. Instead the Abu Dhabi project produces fuel and food and recycles everything.

The current pilot farm is entirely closed-loop, with the seawater drawn originally from the ocean passing through the various stages and finally fed to mangrove plantations. The water is filtered through the mangroves, extracting the final nutrients, and the water can either be fed back to the ocean or recycled to the fish farms. All energy used (such as for pumping the water) is generated with a solar array – so there is no fossil fuel input at all.

The project is achieving remarkable success because it is backed financially by large players – Etihad itself as the principal airline, the Masdar Institute of S&T, and corporate giants like Boeing.

The project will scale up quickly. The pilot project is a plant covering 2 hectares, but in three years it is expected to grow to a 200 ha demonstration scale involving around 140 ha for the Salicornia cultivation, 30 ha for the aquaculture and 20 ha or more for the mangrove plantation.

Could Australia do the same?

Australia is a country with vast arid areas, copious quantities of seawater and sunshine – all the ingredients needed for a similar solar biofuel and food project.

It has a national air carrier in Qantas that has already experimented with various kinds of aviation biofuels. It has a national R&D organization in CSIRO that could organize such a project.

Australia has long experience in development of agricultural models that can cope with high salinity levels. There is a strong research tradition cultivated in West Australia with the CRC for Plant-based Management of Dryland Salinity and its successor the Future Farm Industries CRC – which had to close its doors in mid-2014 for lack of continued support.

Such a project would produce food, both for domestic consumption and export; it would produce aviation biofuel and help restore a fuel processing value chain and again a domestic as well as an export product; and it would utilize water in a way that can promote a means of halting desertification and restoring fertility in arid areas. It is a big idea for a big country.

John Mathews is Professor of Strategic Management, Macquarie Graduate School of Management at Macquarie University. This article was originally published on The Conversation. Read the original article.