From the Neolithic to present times, the amount of sunlight we see in a day has had a profound impact on human culture. We are fast approaching the winter solstice for the Northern hemisphere, which takes place on December 21. This is the longest night of the year – once celebrated as “Yule” by the pagan people of Northern Europe before it became Christmas.

Stonehenge and the nearby Neolithic site of Durrington Walls (circa 2,500 BC) were each built to be orientated to face the midwinter sunset and sunrise respectively. This focus on the winter solstice was an important time marked by feasting and possibly animal sacrifice.

Millennia later, the Romans celebrated Saturnalia (until the fourth century AD) – a festival over the week of the winter solstice dedicated to the god Saturn, involving games and merriment. The last day of Saturnalia was referred to as the “dies natalis solis invicti” (birthday of the unconquered sun) by the Romans, who celebrated it by giving gifts to each other on December 25.

The pagan Anglo-Saxon event known as Yule was in full swing during the winter solstice a few centuries after that, eventually evolving into the festival we now know as Christmas.

But what causes the winter solstice? Our planet has an axial tilt (of 23.4°) with respect to its orbital plane around the sun, which results in the seasons. The winter and summer solstices, and the vernal and autumnal equinoxes, are the extreme points in each of these seasons (see image). In winter, the Earth’s tilt away from the sun causes sunlight to be spread out over a larger surface area than in summer. It also causes the sun to rise later and set earlier, giving us fewer hours of sunlight and colder temperatures.

As it happens, the direction of the Earth’s tilt changes over time. These variations have been known about since the time of the ancient Greeks. Hipparchus, one of the founders of modern astronomical techniques, wrote one of the first comprehensive star catalogues in 129 BC. After compiling his catalogue, he noticed that the position of the stars had changed from those in much earlier records, such as the Babylonian.

Interestingly, the stars appeared to have moved position by the same amount, and he realised that the location of north in the sky must have moved in the intervening centuries. Currently, our celestial north is marked by the position of the star Polaris. But this was not always the case.

The rotation of a spinning object, like the Earth, can be affected by external forces. Given that the Earth is already spinning, any force applied to it, such as gravity from the moon or other bodies in the solar system, will modify this rotation (known as torque). The result on Earth is called the precession of the equinoxes – a phenomenon which affects our observations of the stars. A visible example of this on a smaller scale is shown several times during the film Inception, where the precession of a spinning top was used to determine whether the main character was in reality, or still dreaming.

For the Earth, this precession traces out a circle on the sky once every 26,000 years (see image below). In 3,000 BC, the celestial north was the star Alpha Draconis (Thuban), in the constellation Draco. Given that we can predict this motion, we know that 13,000 years from now our north star will be Vega, in the constellation Lyrae. 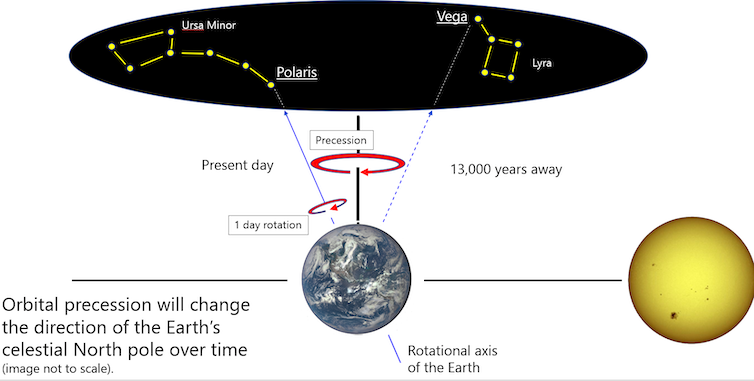 This also affects the onset of the seasons over the length of a year as part of this 26,000 year cycle, and therefore has important implications for anyone attempting to attribute any cultural significance to a particular point in a given season. The time it takes for the Earth to orbit the sun is approximately 365.25 days, meaning we have an extra day every four years. By comparison, the precession of the equinoxes results in about 20 minutes of difference between the Earth’s orbital period when measured against the fixed background stars (a sidereal year), and the time it takes for the sun to appear to return to the same position in the sky each year (a solar year).

As a historical aside, it was the discrepancy between the length of the solar year and the length of a year as defined by the Julian calendar that prompted the conversion to the presently used Gregorian calendar. The precession of the equinoxes was known about and had caused a discrepancy of a few days which prompted the council of Nicaea to change our calendar system.

Under the Julian calendar, originally established by the Romans in 46 BC, New Year’s day in England used to be on March 25, and this was also used to define the start of the tax year. The adoption of the Gregorian calendar in 1752 shifted the date of the tax year forward by 11 days, but set New Year’s to January 1. However, to avoid 11 days of lost tax revenue, the government of that time set our tax year to begin on April 6 where it remains to this day.

So, given that there are 1,440 minutes in a day, and a difference of 20 minutes between the sidereal and solar years, then over a period of 72 years the dates of the equinoxes (and the solstices) would shift backwards in the calendar by a full day, if they were not corrected for (which they are). That means a Roman using the winter solstice as a reference point for the timing of Christmas would have been celebrating Christmas near the end of our November. Even further back, the builders of Stonehenge would have experienced the winter solstice in our September.

The winter solstice has clearly been important historically, but what about the future? Perhaps in a few hundred years, humans settlers will be celebrating Christmas on Mars. The planet Mars also has an axial tilt (25.2°), and hence seasons like we do. Mars also experiences a precession of the equinoxes, but the precession period is less stable than Earth’s. One full Martian precession is approximately 167,000 years.

This means that any future Mars colonists who wish to recreate the winter solstice “festivities” at Durrington Walls thousands of years ago or, perhaps, just marking Christmas, would have to get used to celebrating in different Martian seasons almost every year.