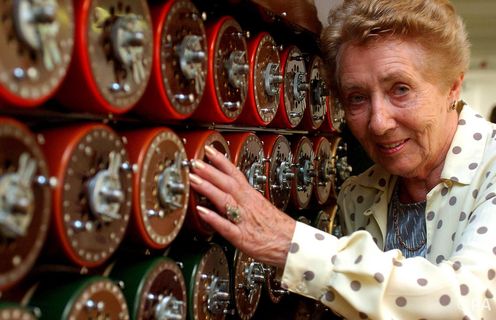 Jean Valentine, a bombe operator at Bletchley in the 1940s. Rui Vieira/PA

By Bryony Norburn, University of Buckingham

Bletchley Park is a name on everyone’s lips at the moment thanks to the generous coverage stemming from a film that rightly celebrates the role played by men like Alan Turing.

But what about the women? At its height there were more than 10,000 people working at Bletchley Park, of whom more than two-thirds were women.

Home to the Government Code and Cypher School, Bletchley Park – affectionately called BP by its incumbents – was shrouded in secrecy during the war and for decades after. Only comparatively recently has it had the recognition it deserves as records are gradually released into the public domain and books are researched and written – another was published just recently.

Wrens on the code-breaking frontline

Many of Bletchley’s women performed very monotonous roles, but nevertheless important jobs that required great concentration for hours on end. They worked in shifts, where no matter what shift they were on they had to fall in line with the others. So those getting up in time for a midnight shift had to endure stew and dripping for breakfast or spend the eight-hour shift hungry.

But for all its foibles, it was a fascinating place to be: one day you might be sitting next to Ian Fleming at lunch, creator of James Bond and frequent visitor, the the next sharing a bottle of celebratory wine with Admiral Andrew Cunningham, the first sea lord. Jean Valentine, as a young Wren in the 1940s at Bletchley. PA

Women held numerous roles at Bletchley, ranging from administrators, card index compilers and dispatch riders to code-breaking specialists. Initially the men in charge had assumed that women were incapable of operating the Bombe cryptoanalysis machines and later the Colossus code-breaking computers – until a group of Women’s Royal Naval Service (Wrens) were brought in.

Proving themselves up to the job, many women who had signed up to travel and see the world in the navy instead found themselves assigned to “HMS Pembroke V” – the naval assignation for Bletchley Park – in deepest Buckinghamshire about 100 miles from the sea.

They came from a variety of backgrounds: some were secretarial college graduates, others from universities, while others came straight from school aged 14. Debutantes, those women from high society backgrounds, were among the first brought to Bletchley as they were considered the most trustworthy – a time when those with the right connections could walk straight into a job in the nation’s most secret organization.

Irrespective of background, all were looking for a job that would make a difference to the war effort. While the many women operating these machines were cogs in the giant code-breaking machine, they were for that no less important than their male counterparts. Operating one of the Colossus code-breaking computers at Bletchley. HMSO/The National Archives

In other areas of Bletchley were women who worked directly on code-breaking. Working under Dilly Knox, “Dilly’s Girls” as they were known included university graduates and actresses among others.

To name but a few, Mavis Lever cracked Italian codes, including messages that led to the Allies' victory against the Italian navy at Matapan. Working on German and Russian codes, Margaret Rock was described by Knox as the “fourth or fifth best in the whole of the Enigma staff”. Their work led Knox to exclaim (after Aristotle): “Give me a Rock and a Lever and I will move the universe”. Joan Murray née Clarke, immortalized by Keira Knightly in The Imitation Game, was a brilliant mathematician who went on to be deputy head of Bletchley’s Hut 8 due to her code-breaking skills. These women and many others did vital work at Bletchley.

Since Bletchley’s secrets were first revealed with the publication of The Ultra Secret in 1974, Bletchley veterans have begun to open up about their experiences. At almost every reunion – each September the park hosts a reunion for all former staff – a new memory is recalled and recorded for posterity. Families also come to learn more about what their relatives did, the younger children brought up on confessional social media often aghast at the idea of keeping secrets for 30 years.

Their work arguably shortened the war by two years. Many of the women were decommissioned at the end of the war or, leaving as married women, usually could not continue working. However some stayed on as the organization transformed into GCHQ as it is today. It’s entirely possible that some of these women continued to play important roles in the early days of computing and intelligence after the war, but we will have to wait for those records to be released.

Such secrecy is a shame, because while there is no let-up in the arrival of new generations of brilliant young female minds, we – men and women – need more reminders of what women working in computing and technical fields have achieved in the past, and what they could achieve today and in the future.

Bryony Norburn, Phd Student at University of Buckingham, is affiliated with Bletchley Park - volunteer. This article was originally published on The Conversation. Read the original article.